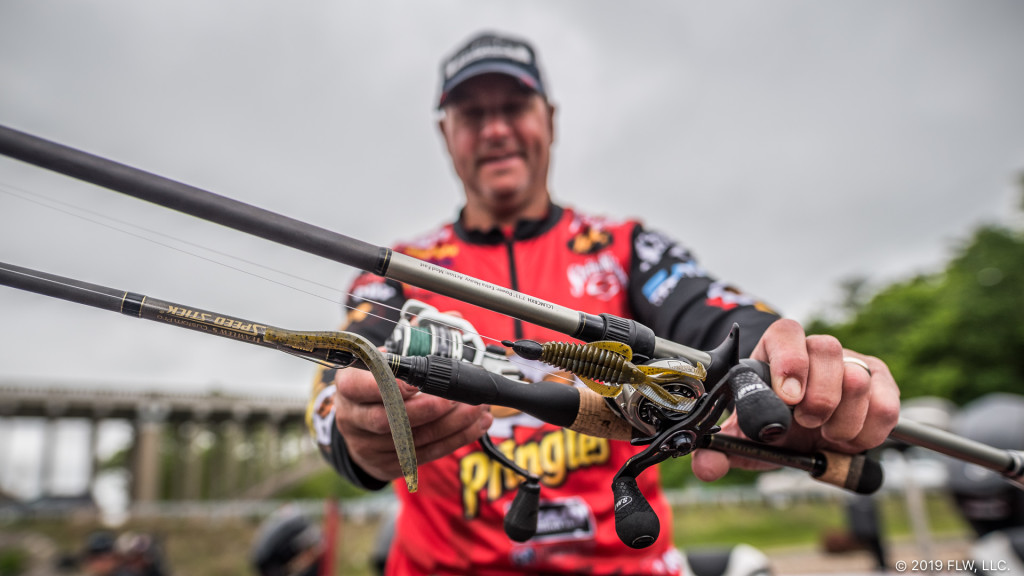 It really didn’t matter what pros threw at Table Rock. The fish were probably going to eat it.

Yet, despite a banner practice, things certainly got tougher throughout the Costa FLW Series Central Division event, which was presented by Power-Pole. Thus, pros needed to continually adapt to the conditions with their offerings. 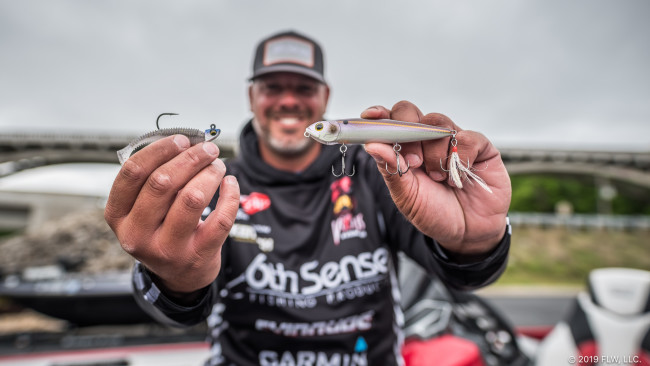 1. Eric Olliverson spent every morning fishing for smallmouths offshore with a Keitech Swing Impact FAT 3.3 on a 6th Sense Divine Swimbait Jighead and a 6th Sense Crush Dogma 115 topwater bait in gizzard shad. Then he’d run shallow to flip up a kicker or two. On the final day, he figured out the bass would come out of the bushes to eat his topwater in the rainy conditions, allowing him to cover water and catch his winning weight. He threw the topwater on a 7-foot, 2-inch 6th Sense LUX rod with a Lew’s casting reel and 30-pound-test Vicious No-Fade Braid. 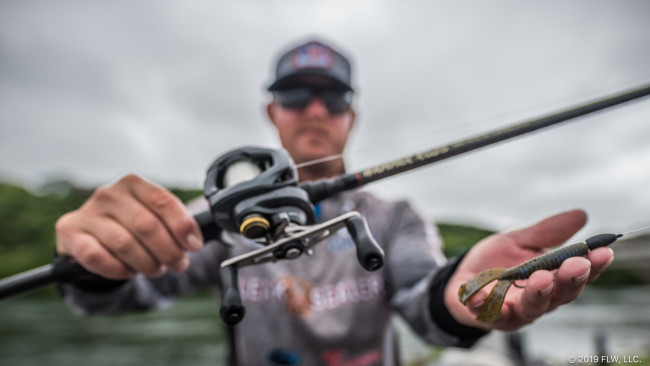 2. Dakota Ebare put a 7-foot, 6-inch Hammer Rods Elite Series flipping stick in his hands Thursday morning and never put it down for three days. His weapon on the end was a Strike King Rage Tail Rage Bug or Strike King Rage Tail Menace Grub (when he ran out of Rage Bugs) in Okeechobee craw behind a 1/2-ounce weight on 18-pound-test Sunline fluorocarbon line. 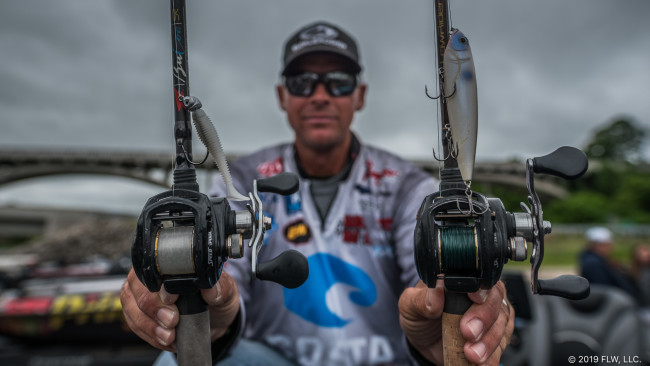 3. Todd Castledine did a little sight-fishing, but he instead focused more on offshore smallmouths, targeting them with a Strike King Rage Swimmer in ghost shad or an oyster-colored Strike King Sexy Dawg. 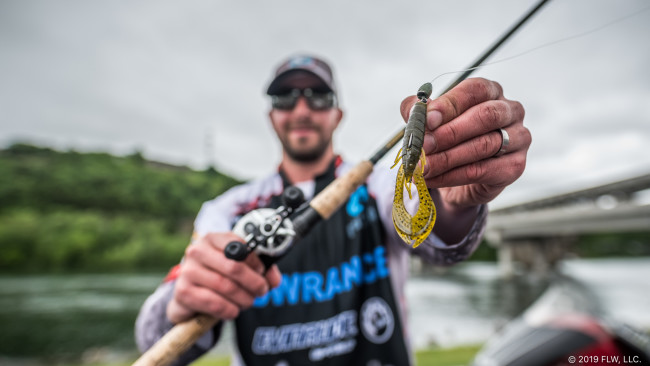 4. Kyle Minke wished he hadn’t spent the first day fishing points with a Ned rig before chasing a few bedding fish, because once he scrapped that pattern on day two to run up the James River and flip laydowns, his weights improved dramatically. His prime flipping baits were a Bitter’s Bait Jitter Craw or Zoom Ultra-Vibe Speed Craw on a 3/0 VMC wide-gap hook and a 1/2-ounce WOO! Tungsten Weight. 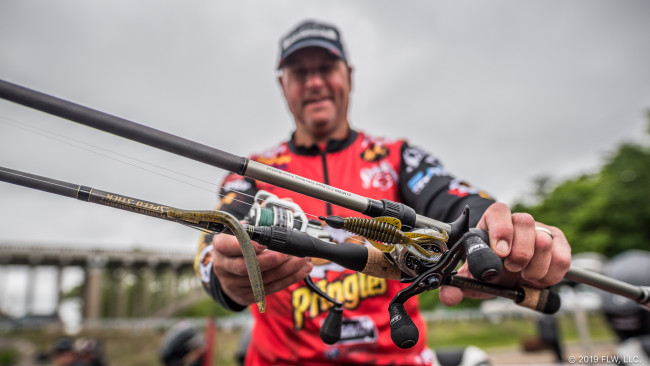 5. A wacky-rigged Strike King KVD Perfect Plastic Ocho did plenty of work for Greg Bohannan up the White River, but his key trick was actually to rig the Ocho Texas style but weightless. He’d then skip it up into flooded brush and twitch and pop it out like a soft jerkbait to give the fish a different look. Bohannan also was ready with a Strike King Rage Tail Rage Bug. 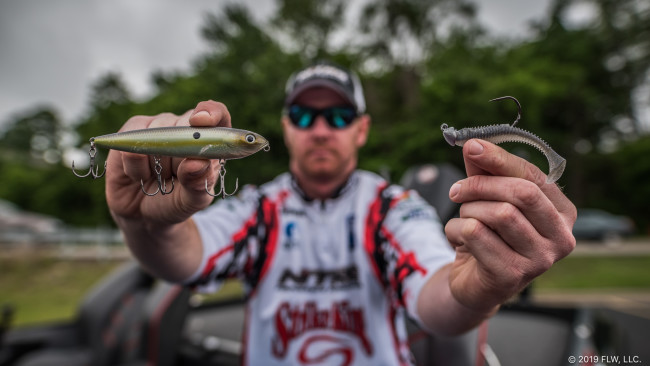 6. Three points within a couple hundred yards of one another were magic for Matt Wood. On day one, he targeted bass that he saw busting shad by throwing a Strike King Sexy Dawg. His catch included a 6-11 giant. Yet, changing weather conditions caused the baitfish in the area to change up their activity, and his bite changed itht hem. Wood had to adapt and toss a pro blue red pearl-colored Keitech Swing Impact FAT 3.3 swimbait. 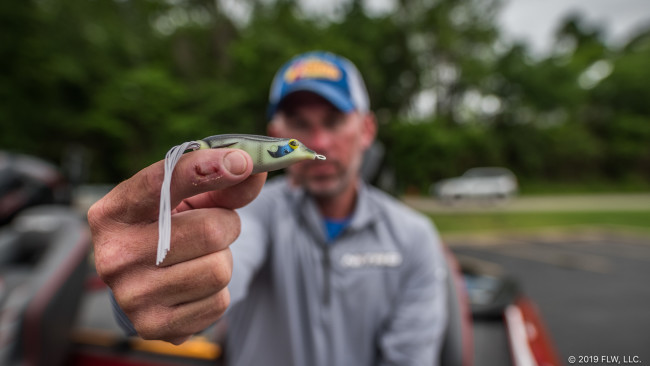 7. For two days, Jake Morris looked like he had the winning pattern. He was making an hour-long run up the James River to three pockets in the McCord Bend area. There, he was coaxing bites out of flooded cover with a Reaction Innovations Swamp Donkey, which had him leading the first two days. Unfortunately, his water cleared up the final day, killing his pattern. 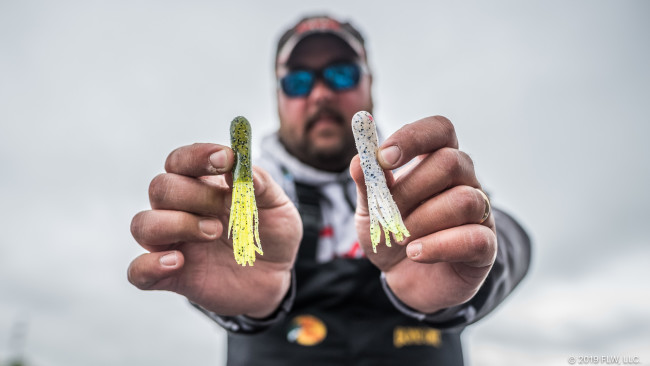 8. Be it sight-fishing or simply pulling out and blind-casting areas where he would’ve liked to sight-fish if the weather was better, Wesley Rogers did all his damage on Bass Pro Shops Tender Tubes in green pumpkin or white with the tail died chartreuse. He threw both on a 1/4-ounce Jewel Rattlin’ Tube Head. 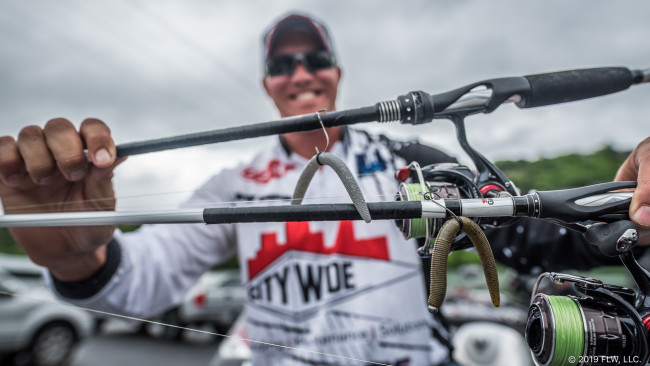 9. It was all about finesse for Greg Mansfield. Fishing points and pockets, he used a Ned rig, shaky head and a green pumpkin Neko-rigged Yamamoto Senko with a 1/16-ounce weight and a 1/0 Owner Cover Shot Worm Hook. He also mixed in shad-colored Senkos, which he wacky-rigged with a weighted hook. 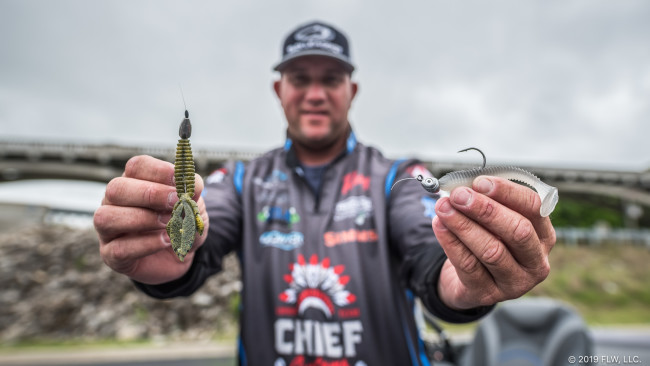 10. Once Jason Bonds committed to sight-fishing, he never gave it up. A big key for him was downsizing to a Strike King KVD Perfect Plastic Baby Rodent in green pumpkin and California 420. He also carried a swimbait.