Wilson Still in Control at Rayburn

Texas pro stays in the lead thanks to 9-pound kicker 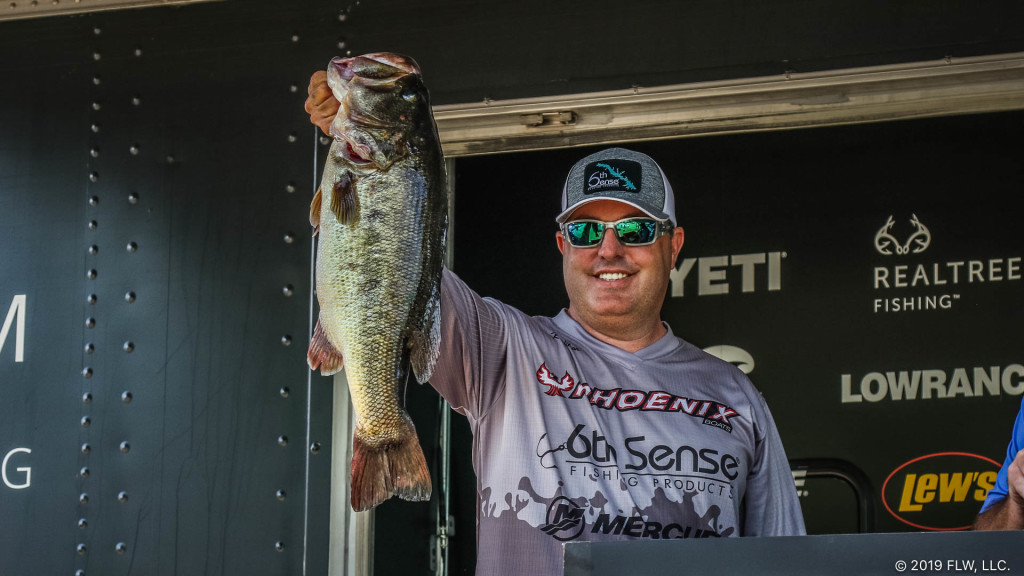 Thanks largely to a 9-pound, 5-ounce kicker and another 5-pound-class bass, Kris Wilson of Montgomery, Texas, was able to maintain his lead on day two of the Costa FLW Series Southwestern Division event presented by Mercury on Sam Rayburn Reservoir.

While Wilson’s place in the standings didn’t change, and it was exciting to see him bring a giant across the stage, his confidence regarding his chances to win has started to waver.

Yesterday, Wilson had a limit early from his offshore starting spot and was culling his way past 21 pounds by about 7:30. He ended up with a limit worth 26-11 after a couple of additional culls around 1 p.m. This morning, he scraped together just three small keepers on his starting spot before the big one bit and had to fight and claw the rest of the day to catch about 10 keepers and upgrade to 21-12.

“Everything was slower – all around,” Wilson says. “I struggled all day. I caught like half as many as I caught yesterday. I don’t know. I thought there’d be more coming, but I don’t know what they’re doing.”

“Yesterday the fish were grouped up good, especially on that one particular [starting] spot, and today I could still see a lot of fish on the 360 [forward-looking depth finder], but they’re just all scattered,” he says. “They’re just everywhere instead of grouped up. I think it just makes them a lot harder to catch. I don’t know why they’re scattered.”

Tomorrow, there’s not really much of a Plan B. Wilson spent about 20 minutes flipping today, just to see if he could spark any magic, and lost one fish before he returned to deeper waters. He plans to return to his best spot in the morning and hopes the fish set up better. Then he’ll rotate through the remaining schools he’s found.

“I still have a couple spots that I haven’t been to further up the river, but I did go to those yesterday. But I pretty much ran everything I had today except for the stuff up there,” he says. “I had one other spot yesterday where I caught two of my big ones and my co-angler caught a big one, and I didn’t get another bite there today. So I don’t know.

“I’m probably going to run my spots up the river and hope I run into them somewhere. I had, maybe, 12 schools, but now I only have three or four I think. I don’t know what they’re doing. They’re going away for some reason. I may run some brush tomorrow. Maybe they’re getting on that. If I can get one big one I’ll be all right. That one big one saved me today.” 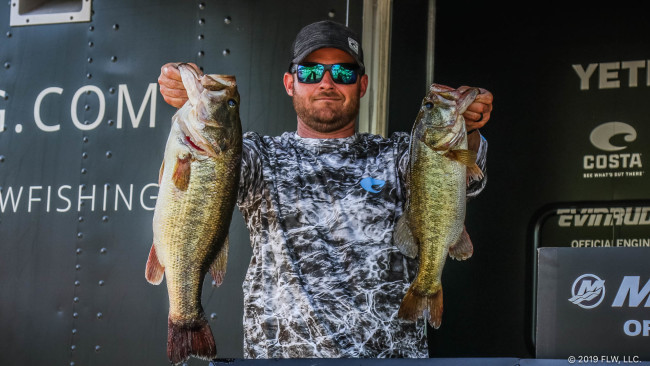 After opening the tournament in second place among co-anglers with 15 pounds, 8 ounces, yesterday, Zack Freeman of Russellville, Ark., improved with 19-4 – the heaviest co-angler weight so far – to move into the lead today.

Freeman, not surprisingly, had a wonderful time fishing with Dakota Ebare today. How could you not enjoy it when you flip a 7-10 kicker out of the brush?

“I had a phenomenal day,” says Freeman. “I really don’t know how many fish we caught. We started out doing some flipping and ended up doing some offshore stuff. We did everything I like to do, and I caught them both ways.”

“Yesterday, I caught them all dragging around a worm. I didn’t do any of that today. So I’m going to have my bag completely packed and ready for tomorrow. I don’t know what we’re going to do tomorrow.”