Grass and hard cover are both getting it done 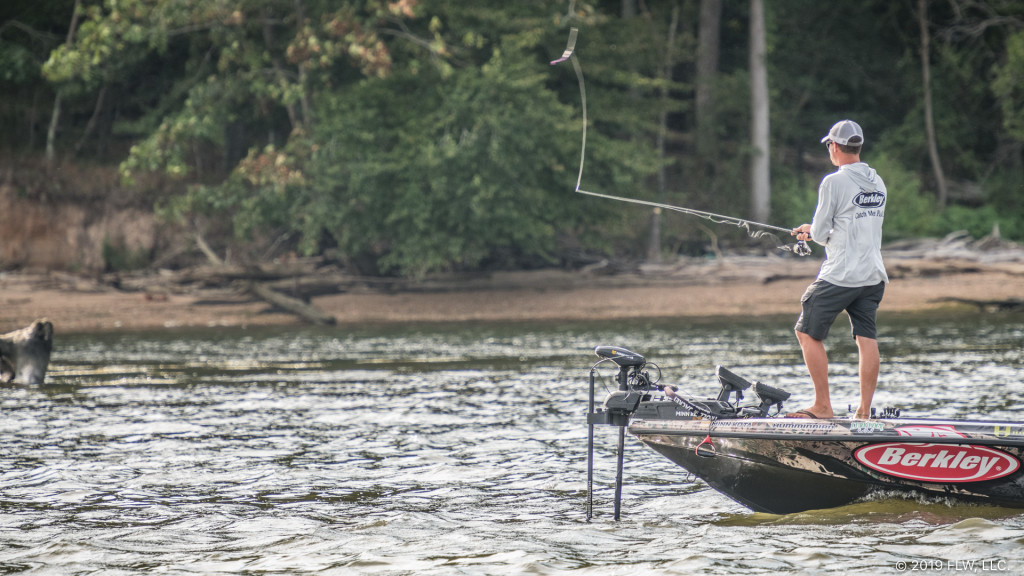 Through two days of competition on the Potomac in the Costa FLW Series Northern Division presented by Gajo Baits event the weights haven’t been nearly what the river is capable of kicking out. That said, all the top pros have managed to put at least one good day together, and some have maintained really strong consistency, just at a lesser pace than would be the norm in June or some other time of the year.

In first, Marvin Reese has fished hard cover and stretched out a decent gap between himself and the rest of the pack after two days of the tournament, which is presented by Lowrance. Behind him, Justin Atkins and Robert Grike are both ready if he falters, and the rest of the top 10 is packed with Potomac experience.

After the passage of a cool front with plenty of wind and rain, Saturday should be pretty nice, with a crisp morning and plenty of sun. That could set things up for fireworks on the final day, as the pros will finally have a lot of falling tide to fish in the morning and the water temperature should be cooled down a bit and may have the fish chomping. 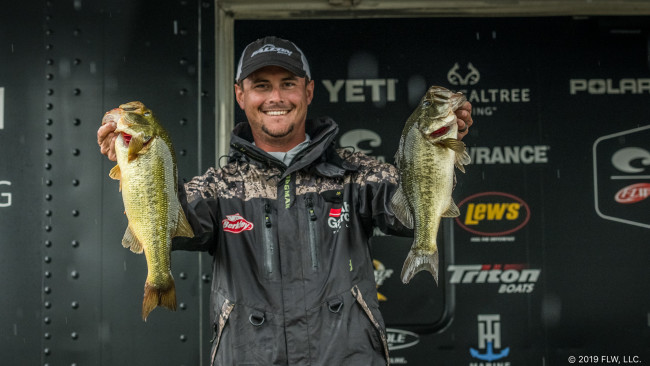 A former FLW Cup champion, Justin Atkins put up 12-7 on day two and is a missed opportunity or two away from being neck and neck with Reese.

“I just didn’t fish as clean today,” says Atkins. “I felt like yesterday went perfect, because I had an early boat number and I knew I could start on a community hole, catch a couple of key fish and not have to catch as many on other places. Today I didn’t get to start there, so I went to my second place and they’re not biting. So, I left and went on to my grass area, and what sucked is when I got to my grass area there was another guy there who said he’d caught 10 or 15 keepers already that morning. I had a little feeling I should have started there because the tide was perfect, but I fished around, and I was in a little bit of a rush so I missed a few, and then I caught a couple and got my rhythm going.”

After catching a double-digit limit, Atkins made a move.

“I’ve had a little place that is a little water run-in where I’ve caught a couple key fish on a frog,” says Atkins. “And I went there this afternoon and caught six or seven keepers and two that I weighed in – that was a really good move.”

This week, Atkins hasn’t really had to worry about a limit like some pros have, and he seems to be in a pretty good groove on the Potomac.

“The very first time I came here I had one little bait I was catching them on, it was a little swimbait, and I really got dialed in on it,” says Atkins. “The fish were biting it and I fished comfortably and I caught ‘em. The second time I came here was right after I won the Cup, and I didn’t get very much practice and I never got comfortable with a bait. This week I came up early and really spent a lot of time trying to find one type of cover or a bait that I could throw in multiple places. I’ve caught a lot of fish on a drop-shot this week, and it’s played on hard cover or grass. That’s where the comfort comes in, if I keep that in my hand I’m going to get bites and I don’t have to worry about throwing a ChatterBait or a swim jig or anything else. I don’t have but a couple of spots that are good, but I’ve got something good to throw on them.”

Reese has built himself a pretty nice lead over two days, but having Atkins in the rearview has got to be just a little bit scary.

“It’s up to him to go catch ‘em,” says Atkins. “Because I feel like I’ll catch another 12 or 13 pounds tomorrow, and if I do he’ll have to go catch ‘em and we’ll see where it goes from there.” 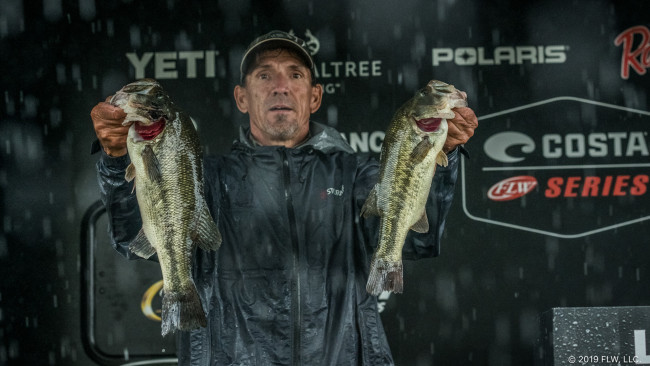 Fishing up the river on mostly hard cover like Reese, Robert Grike followed up 14-4 on day one with 12-5 on day two to move up to third place.

“I’m just pretty much junk fishing,” says Grike. “I’ve found a few hard cover places that have some fish on them and I’m just jumping around and trying to catch them when they’re biting. I pulled out today around noon, I didn’t think I was going to get many bites with the higher tide. I took a chance to see if I could get some grass fishing working today.”

Though he caught a good one in the grass on day one, Grike never made that happed today. Up on the hard stuff, his bread and butter has been a drop-shot and a jig.

“Today and yesterday it was very easy to catch keepers,” says Grike. “But the big ones are very hard. To catch a big fish I basically have to go somewhere that I’m not going to get another bite and I’m only fishing for a big bite. It’s hard to go fish for big fish if you don’t have a limit or a limit of decent fish, because I might not get any bite at all. Today I caught my big fish around 10:30, and I could have easily not caught that fish. Tomorrow, I think I’m going to have to go for it and try to only get five bites.” 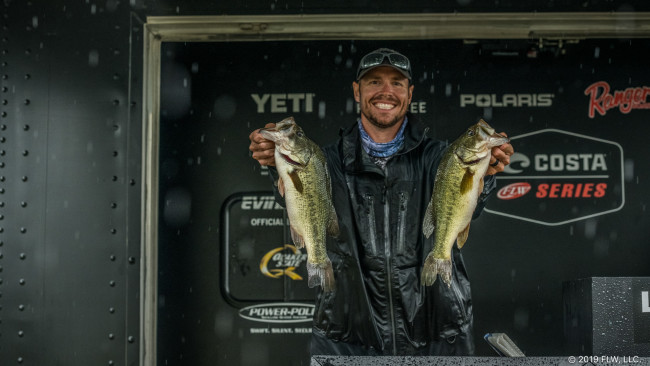 A bit like Grike, Ryan Davidson hasn’t had any problem putting keepers in the boat, and actually caught upwards of 20 keepers on day one. However, with 12-11 and 13-3 bags to his credit this week, he hasn’t been able to power in to that mid-teen range.

“Numbers are good, I’m not worried about numbers, but it’s quality that’s the problem,” says Davidson. “I’m only getting seven or eight quality bites a day, and today started really bad, I lost three of the first four that bit.”

Still, he says it only took him about 30 minutes to get a limit. Other than catching a lot of fish, Davidson is playing things a bit close to the vest. On day one both grass and hard cover produced, but he couldn’t get the grass to go at all today.

“The tide doesn’t really affect what I’m doing, I’m just changing the depth of the water and moving up and down,” says Davidson. “I’m running a whole lot of spots and not setting in one place very long.

“I’ll keep running the game plan tomorrow. I think what I’ve been catching is about what it is good for, I lost two good ones today though, so there’s potential for maybe a 15- or 16-pound bag.” 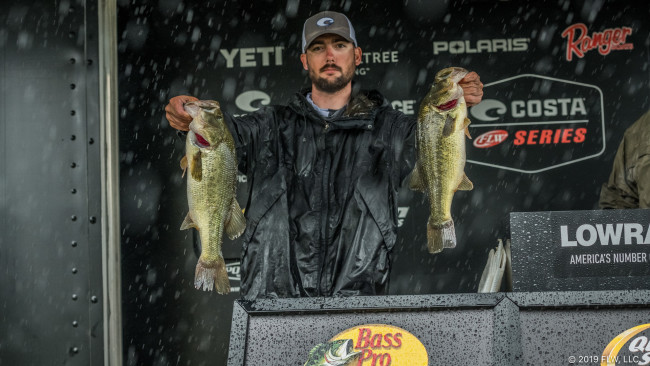 Cracking 14-10 on day two, Wil Dieffenbauch rocketed into the top 10 after a solid day one.

“It was not easy. I ended up having just five keeper bites all day,” says the West Virginia angler. “I went down to my main area, and I caught two and my co-angler caught three, and we sat there until about 1 o’clock. I decided to come back up, and when we got out on the main river there were 4- and 5-footers, so it took an hour to get back up this way. I stopped on my big fish spot with just a little time left and I caught three fish in about 15 casts and two of them were big ones.”

Fishing all grass with a homemade vibrating jig, Dieffenbauch caught just six keepers on day one and five on day two. If he can catch another five like he did on day two he may have a shot to make things interesting tomorrow.