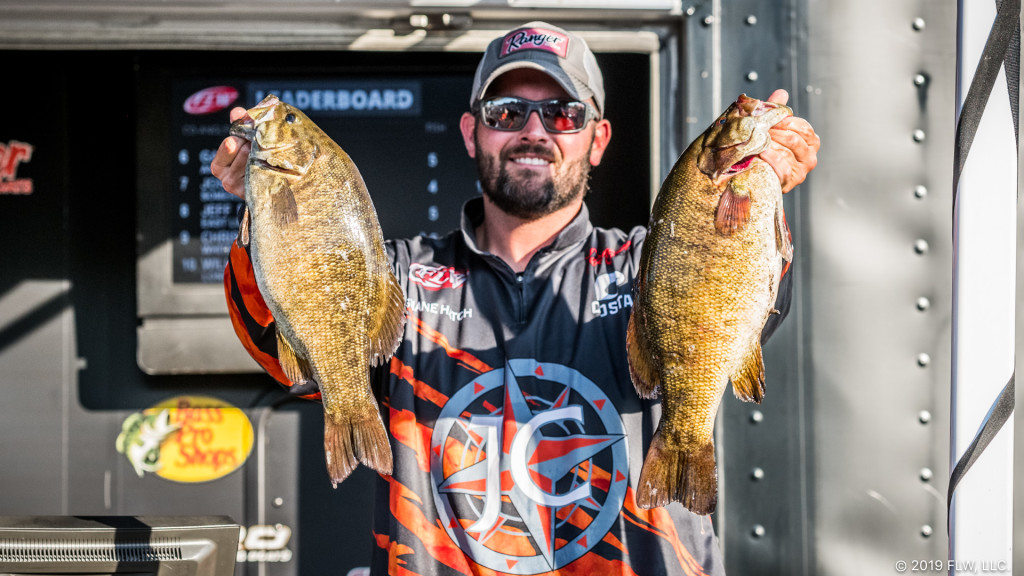 There were no 25-pound mega-bags coming across the stage at weigh-in of the final leg of the Costa FLW Series Northern Division. The event on the St. Lawrence River, presented by Gajo Baits, hasn’t been the slugfest many expected after one day of fishing. There were still plenty of 20-pound bags, though, and the St. Lawrence on a bad day is still a tremendous fishery.

With the river’s smallmouth clearly in transition mode, anglers really had to adapt their game plans to stay with the moving fish. With a pair of bags topping the 23-pound mark, 20 pounds only got you in 18th after day one. Shane Hatch’s 23-7 bag beat out Dakota Ebare by 1 ounce to give the Maine pro the lead for the time being.

“I certainly wasn’t expecting to have that good of a bag,” Hatch says. “I actually thought I had a little less. So I’m happy.”

The big question going into the day was how far anglers would make the run down river, potentially going into Lake Ontario. Sure enough, plenty did, though what they found was a mixed bag. A number of pros said they went down there only to find unfishable conditions on the lake thanks to 4-foot waves, or the schools in the river seemingly having disappeared.

JT Kenney actually ran 93 miles to not catch a fish – he caught all his weight working his way back. Matt Becker only found disappointment and rough water out on the lake, and Joe Wood said he had a pair of schools where he could catch 25 pounds “easy in practice” ghost him today.

As for the leader, Hatch says he only ran maybe 40 miles, and, once there, he bounced around a lot.

“I probably hit 30 spots with them being anywhere from 5 to 35 feet,” Hatch says. “Some are big areas and some are specific spots, but a lot of them are one-fish deals.”

Being that this is his first time in the top 10 of a Costa FLW Series tournament, he was tight-lipped as to specifics, but he did say he caught more than 15 keepers. And as for presentations?

“Nothing different than anyone else,” Hatch says. “We’re all fishing for smallmouth. It’s pretty obvious what everyone is doing.”

With conditions forecast to be similar tomorrow (just a little warmer but with the same southwest wind) – something many locals noted as a reason for the tougher fishing, as the wind was out of the east most of practice – Hatch says he sees no reason to change up what he’s doing. 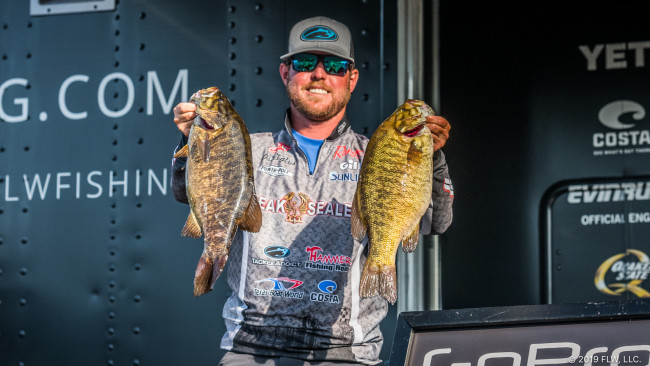 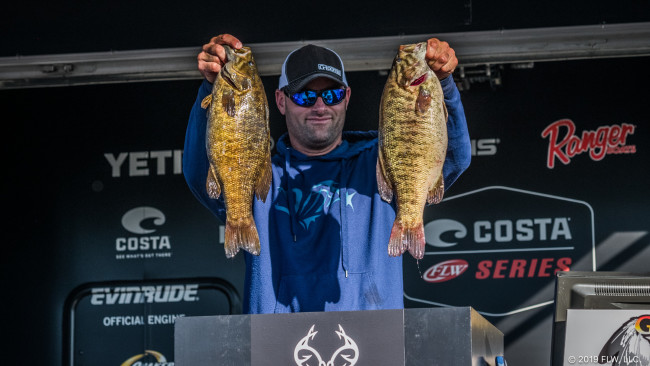 Being a co-angler offers a unique opportunity to learn, and what Josh Hertzog learned today has him in the lead on the co-angler side of things.

“I learned a lot today,” says Hertzog, who was to only co-angler to crack the 20-pound mark (20-1). “I don’t want to say what, but hopefully I’ll be able to use it based on what my pro does tomorrow.”

While Luzak was clearly out-fishing him to start, Hertzog picked up on what he needed to do and caught a 5-13 and another 5-pounder in quick order. The end result was a bag that was only 7 ounces less than his pro’s.

“I had a lot of fun, and I definitely hope to be able to do that same thing tomorrow,” Hertzog says.