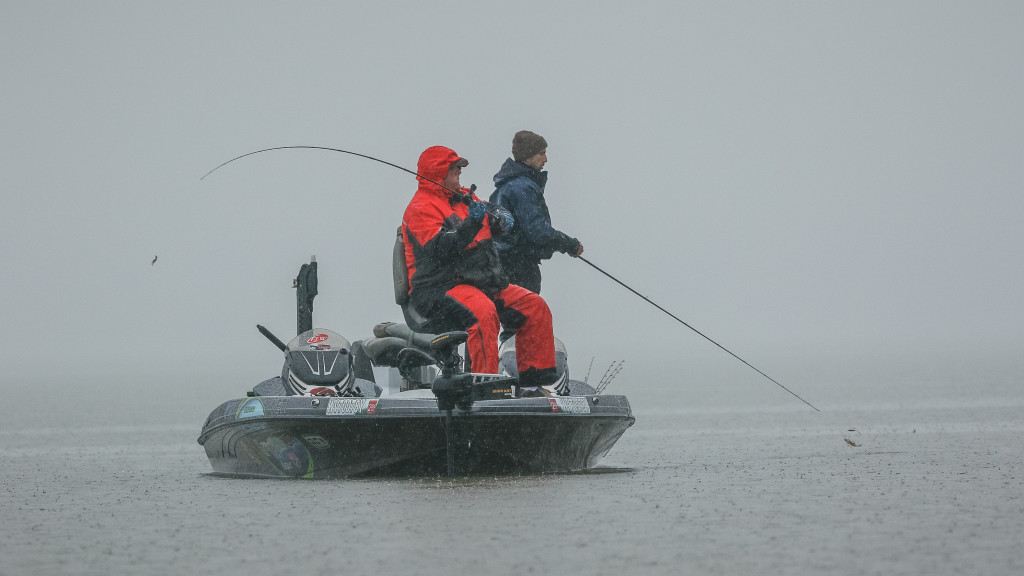 The first day of the Toyota Series Eastern Division tournament on Lake Hartwell rolled out to much the same weather as many days so far in 2020 across upstate South Carolina. Drizzly rain at takeoff turned into scattered showers throughout the day with dense areas of fog throughout most of the morning.

While none of this came as a surprise to anglers competing in the tournament, probably the biggest factor was the amount of water that was pulled out of the lake during days leading up to tournament time.

Ordinarily, moving water in a fishery as big as Hartwell puts the lake’s population of largemouth and spotted bass in a feeding mood, but the frequency of changing water levels over the last several weeks continues to make the fish finicky.

The majority of the field seems to have abandoned such typical spring fishing locations as Coneross Creek, Martin Creek and 18 Mile Creek on the Seneca River for locations further south on the lake.

Another possibly limiting factor for today’s full field of anglers is a lack of any sunshine during the morning. Sunny skies, especially in heavily stained water, is a positive for feeding behavior, as Hartwell’s population of blueback herring generally become more active when the sun is shining.

Rain and fog blanketed the area, cutting visibility to near zero at times throughout the morning. For safety’s safe, this found many anglers staying put and working extended rocky points and sandy cuts longer than would normally be expected of run-and-gun conditions.

Most anglers we ran into up the lake seemed to struggle with either small or short-striking fish while throwing everything from crawfish-pattern crankbaits to white double-bladed spinnerbaits and vibrating jigs.

It was hard to tell by midday what the prospective weights could be by the end of the day, especially if the rain begins to abate. Angler Eddie Whiten Jr of Twonville, S.C., reported an estimate of 14 to 15 pounds swimming in his livewell before lunch.

“Both of us have already limited this morning using a crankbait,” Whiten says of his and his co-angler’s luck so far. “We picked up a couple of 4- to 5-pound fish on a jig right off one of the bridges. These fish are really acting like they want to move up, but I’m afraid the way they’re pulling water today is holding them from moving too shallow.”

Weigh-in this afternoon for day one will be held at 3:00 pm ET at Clemson Beach and Rec Area located at 275 YMCA Cir in Seneca, S.C. The full field will fish again tomorrow before paring down to the top 10 finishers on Thursday. Be sure to visit FLWFishing.com this afternoon to watch the live weigh-in.