Robinson Still on Top at Hartwell 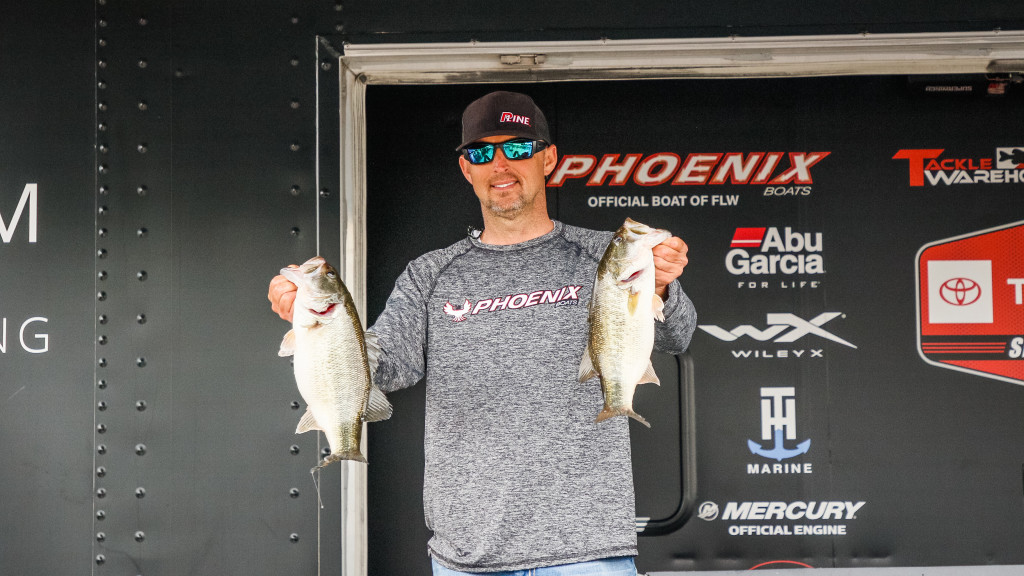 Despite tough and everchanging conditions that quelled his bite on day two of the Toyota Series Eastern Division opener on Lake Hartwell, Marty Robinson still has the lead. He can’t ask for much more than that.

The MLF Bass Pro Tour pro, who hails from Lyman, S.C., was the only angler to weigh in more than 20 pounds on day one (21-1), but slick conditions seem to have hurt his bite on day two. He weighed in a five-fish limit of 14 pounds, 9 ounces on Wednesday to retain the lead by 1 pound, 5 ounces over Derrick Bridges.

Robinson says the early morning pattern around the mid-lake area that allowed him to claim the lead yesterday held out again today, but a lack of inclement weather did not help him throughout the rest of the day.

“Today started off good with a decent morning bite. It was pretty good first thing,” says Robinson, “But we didn’t have any wind, hardly, and no rain; nothing to break up the surface of the water, and that hurt me. I didn’t catch a lot of fish through the day.”

Weather forecasts for Thursday are predicting cooler temperatures with periods of rain with some light winds, but Robinson has a backup plan if the weather doesn’t work in his favor on day three.

“I got some dirty-water fish up the river if it slicks off again tomorrow; I may run up there,” he says. “I haven’t tried them yet, but I feel like I can catch some good ones up there.”

Robinson says he’s going to try to see if the areas he’s fished on the first two days of competition can carry him, at least part way, to victory on Championship Thursday.

“I’m going to start off on my early morning stuff, hopefully catch me a limit, then see what the weather’s going to do and make a decision,” he adds.

While much of today’s field applauded the mild temperatures and warming water, for Robinson, it’s Lake Hartwell’s herring population – not air and water temperatures – that will dictate how he fares tomorrow.

“You can never tell,” he says. “These bass are eating herring in the mornings, so it’s all about the amount of herring that gets up in these places I’m fishing overnight. If the herring get in those ditches, the bass will get in there, too, so we’ll see.”

The field pares down to only the top 10 boaters and co-anglers for day three. 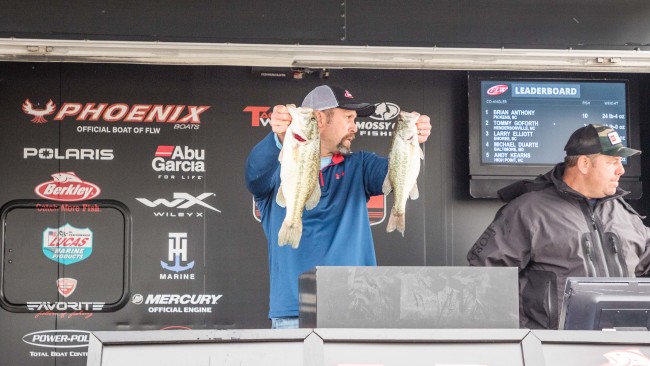 Pickens, S.C., co-angler Brian Anthony put together a five-fish limit weighing 12-13 on day two to take over the co-angler lead on Lake Hartwell. His two-day total is 24-4 heading into the final day of competition, and it’s consistency that’s carried him this far.

Anthony fished with pro-angler Matt Bores of Hilliard, Ohio today and says things went well from the back of the boat.

“We caught fish on our first stop and had a good morning bite,” he says. “Then, after lunch, it was very slow.”

Sharing some of his personal knowledge of the lake, the pair visited a couple of Anthony’s shallow-water spots where the co-angler employed a Berkley Frittside (size 7) crankbait and a shaky head with a worm trailer to put him into the top spot.

“I do my thing, and if they get me around fish, I catch them,” says Anthony. “The good Lord has blessed me so far. That’s all I can say.”