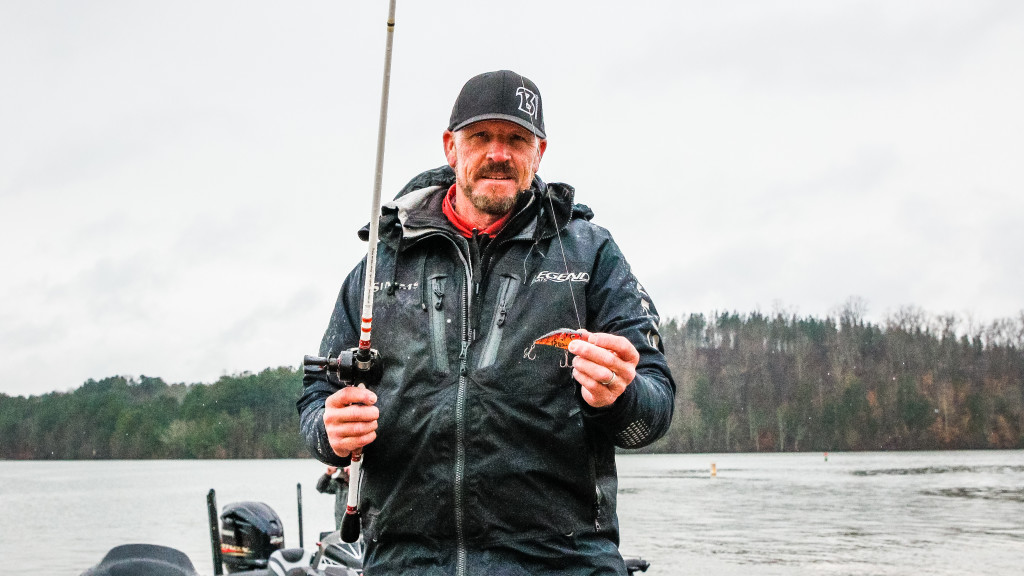 Because of high water and cooler conditions, bass on Lake Hartwell haven’t quite gotten fully into the mood to spawn. During the Toyota Series Eastern Division opener on Lake Hartwell, there were plenty of shallow fish to be had, but catching them wasn’t as simple as finding one pattern or one primary bait.

Here's a look at what the top 10 used to catch their fish and cash some checks last week on Hartwell. 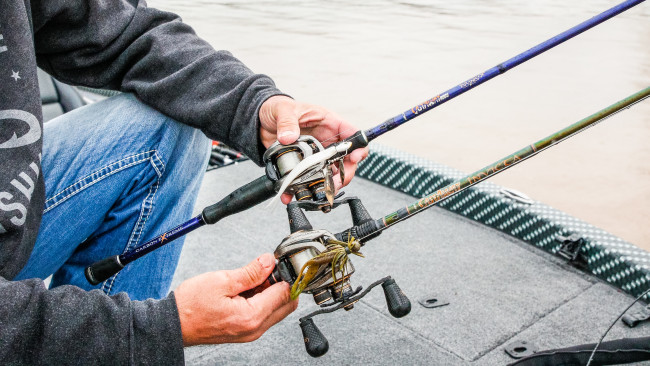 1. Marty Robinson used two primary baits to get the win: a 3/8-ounce Buckeye Lures Su-Spin Blade in pearl/white and albino with a pearl white Zoom Fluke attached and a 1/2-ounce Buckeye Lures G-Man Ballin’ Out jig with a green pumpkin Zoom Creepy Crawler trailer. For the underspin, he used a Castaway Rods Taranis Carbon Extreme 7-foot medium-heavy rod paired with a Lew’s Custom Pro Speed Spool SLP (6.8:1) reel spooled with 15-pound-test P-Line fluorocarbon. He used the same reel and line for the jig but with a 7-foot heavy Castaway Rods Invicta II rod. 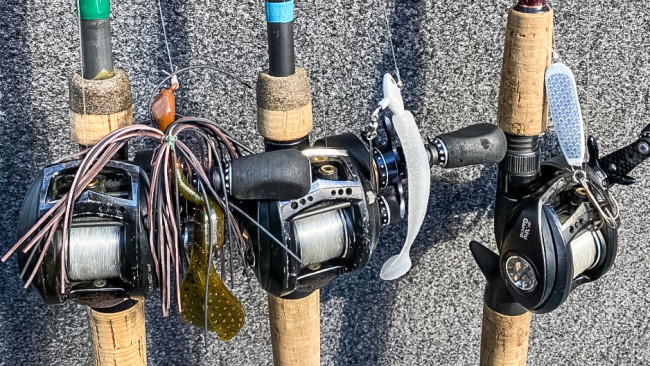 2. Derrick Bridges also relied on two baits at Hartwell: A 1/2-ounce NuTech Lures jig in brown with a double weed guard and a 5/0 Trokar hook with a skirt Bridges hand-ties and either a 1/4- or 1/2-ounce Fish Head Bucktail Spin in white with a sight flash Zoom Boot Tail Fluke trailer. He used 15-pound-test Seaguar InvizX for the underspin and 20-pound-test Seaguar InvizX for the jig, which he had spooled on a high-speed Abu Garcia Revo MGX paired with a G. Loomis NRX 7-foot, 5-inch medium-heavy rod. 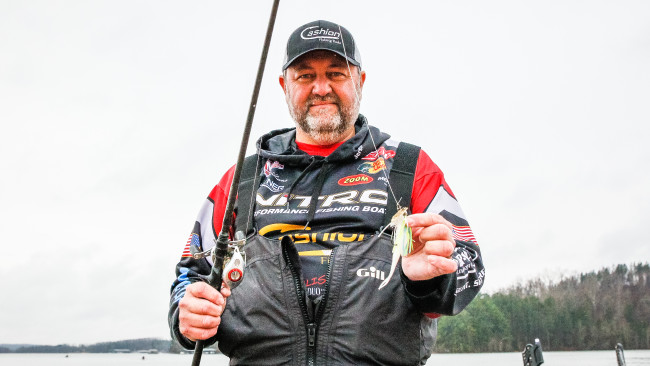 3. David Williams primarily stuck with a bladed jig to catch his fish. His go-to was a 1/2-ounce Queen Tackle bladed jig in white with a Zoom Salty Super Fluke (white) trailer. He fished that on a Cashion 7-foot heavy 8447 rod and a Bass Pro Shops Johnny Morris Series reel with 20-pound-test Hi-Seas mono. 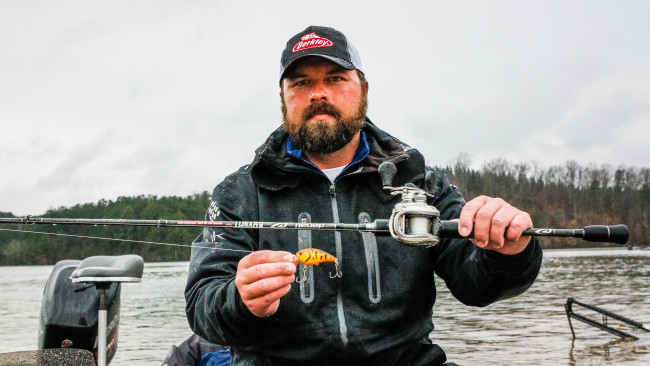 4. Cameron Lineback used a trio of lures throughout the tournament. His primary baits included a Strike King KVD 1.5 square-bill crankbait in orange belly craw, a 1/2-ounce Z-Man/Evergreen ChatterBait Jack Hammer in white with a white Zoom Fluke trailer and a Texas-rigged Zoom Ultra Vibe Speed Craw in black. He fished those on several different Denali rods, from the KOVERT Lite cranking rod (7-foot) to the Rosewood 7-foot medium-heavy and Rosewood Flipping 7-foot heavy. He paired each of those with Lew’s reels. 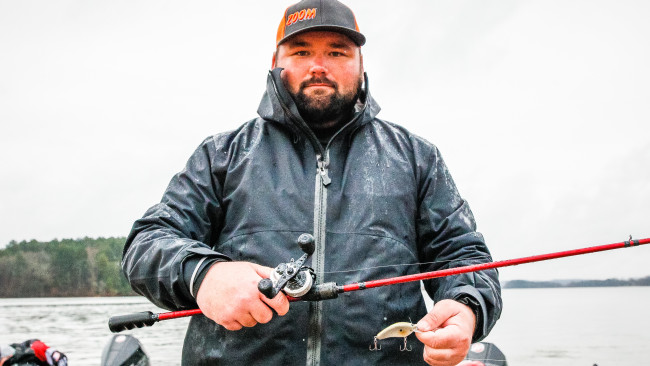 5. Jayme Rampey cranked up a lot of fish on a Greenfish Tackle Big G Flat Crankbait in the cellmate color in the mornings and then switched to a local-made shaky head paired with a Zoom Trick Worm in red bug as the day wore on. He fished the crankbait on an Abu Garcia Veracity casting rod with an Abu Garcia Revo SX reel spooled with 10-pound-test Hi-Seas flourocarbon line and fished the shaky head on a similar setup with the same rod and reel. 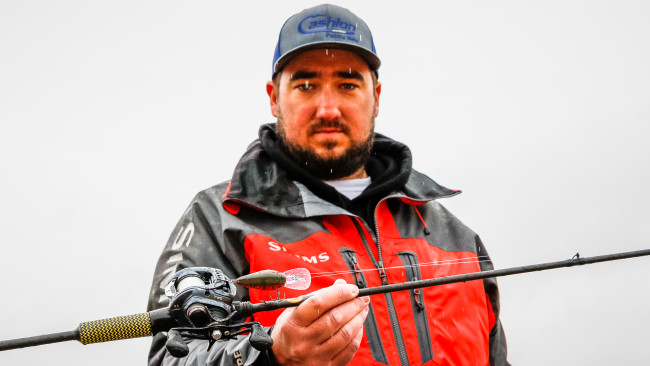 6. Cody Pike’s go-to for a sixth-place finish was a SPRO Mike McClelland Rk Crawler 55 in red bug. He fished it in just about every depth of water, from 4 to 6 feet to 15 to 20 feet. 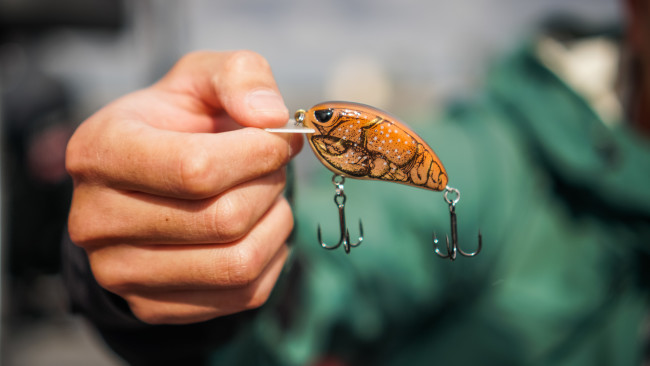 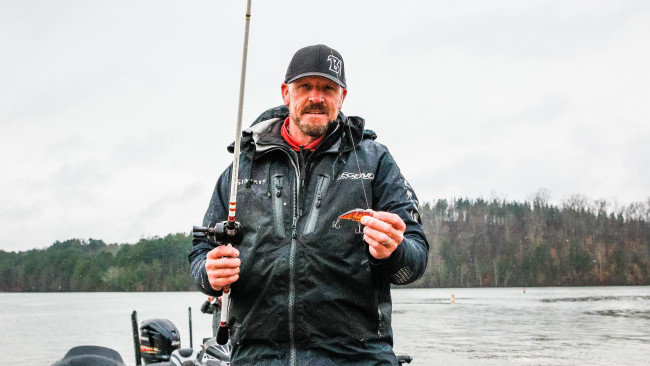 8. Thomas Guthke’s Carolina rig consisted of a 1/2-ounce weight on Seaguar fluorocarbon and a 6-inch Zoom Lizard in green pumpkin about 18 inches from the weight. He also mixed in throwing a Boyd Duckett Baits BD Soft Squarebill in red craw. His drop-shot featured a 6-inch ] Roboworm Straight Tail in red crawler on 6-pound-test Berkley Vanish line. Guthke fished both the square-bill and Carolina rig on Duckett rods and Shimano Curado reels.

9. Trent Palmer’s top two baits for dragging ditches were a 1/2-ounce handmade underspin in white paired with a 3 1/2-inch Zoom Swimmer Paddle Tail, also in white, and a 1/8-ounce Ned Rig with a Roboworm Ned worm in green pumpkin. He fished both on ALX rods. 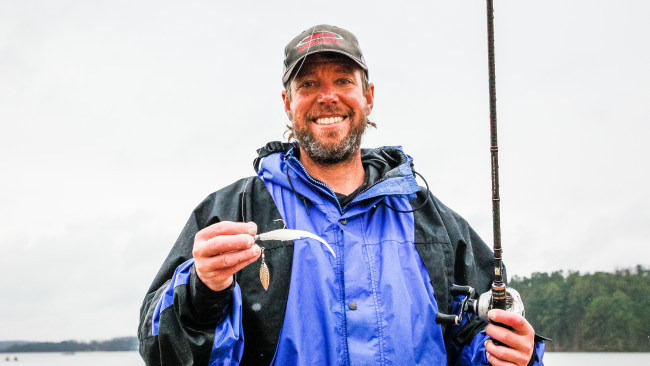 10. Kerry Partain focused on finding baitfish and tricking the bass feeding on them into eating his 3/8-ounce Blade Runner underspin in white paired with a Zoom Salty Super Fluke (white). He used a setup of a G. Loomis rod and Lew’sreel spooled with Seaguar fluorocarbon.