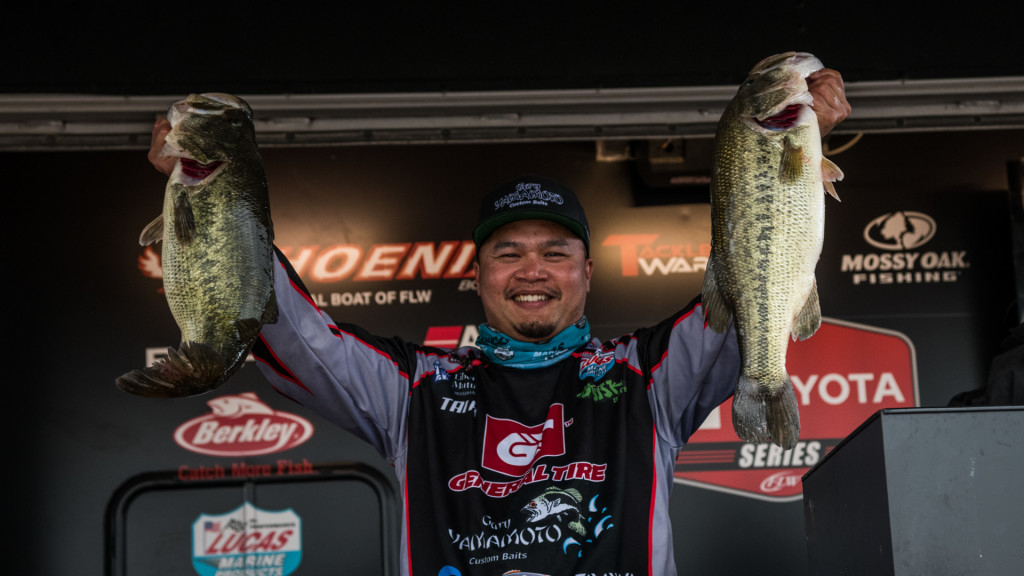 It’s not likely that Lake Havasu makes it into too many conversations about the best big-limit bass lakes in the country. However, based on how the Toyota Series Western Division pros showed out at Havasu in their season opener today, in less-than-ideal weather, Havasu might be worth another look from anyone who enjoys hammering numbers of big largemouths and smallmouths.

Tai Au of Glendale, Ariz., jumped into the early lead with 26 pounds, 1 ounce, but he’s not the only one to smash ’em. California’s Jordon Collom is only 2 ounces back, and 12 pros topped 20 pounds.

All that despite overcast, rainy weather that the locals say usually shuts down these sunshine-loving desert bass. It especially makes sight-fishing tough, and the spawn is the dominant story line.

Au and most of the others with big bags today took advantage of this tournament being timed up perfectly with a big wave of bass moving up to bed. Not everyone caught fish from beds, but the general shoreward movement of fish factored into all the big limits.

The leader was dialed in right from the start today.

“I saw two big ones late yesterday when I practiced,” he says. “Last night I was up tossing and turning, which is something I never do. I consider myself a veteran in the game, but I didn’t sleep at all last night because I had a good boat number.

“Finally, I got to my first spot, and there was nobody around. No one came in. I caught three of my big ones in a cut. It took a little longer than I wanted. I ran to a lot of beds where I’d marked 4s and 5s [pounders]. Unfortunately, people were on them.”

An electrical issue sidelined Au for a little while and forced him to return to the takeoff area and “fish local.” Regardless, he was done catching his limit by around 10 a.m.

“I’m really, really happy,” he adds. “I kept my composure and came in with the bag I had today.”

Au caught four of his keepers sight-fishing and one on a crankbait. He describes the sight-fishing as “going grocery shopping,” meaning he can cruise through an area, scout the clear waters and pick out the fish he wants, assuming no one else is on them. Yet, having “a few different things going” is certainly beneficial given the weather. This morning dawned mild and overcast, with a slight breeze, but by lunchtime a steady rain was falling. Then at weigh-in the bottom fell out, drenching the weigh stage with rain blowing in at a 45-degree angle. There’s more rain and storms in the forecast for the morning.

Still, all of the contenders on day one reported that more big fish are moving up by the day. Au says he saw mostly bucks on Monday in practice, with the larger females rolling in on the final practice day. Today, they were up en masse, showing up to weigh-in plump with eggs.

“Tomorrow, it’s a tough call, because some of the areas that you find beds you can’t go bed-fishing because the wind and overcast makes it really tough. Again, I’m relying on a little bit of reaction and sight-fishing, not really finessing them at all,” Au says.

“This is Havasu, and it looks like the fish are wanting to move up – the big females. It looks like it’s definitely going to be a slugfest, so I’ve got to catch them again tomorrow to make the top-10 cut. There’s so many big fish in this lake that anybody could go out and whack a 25-pound bag tomorrow.” 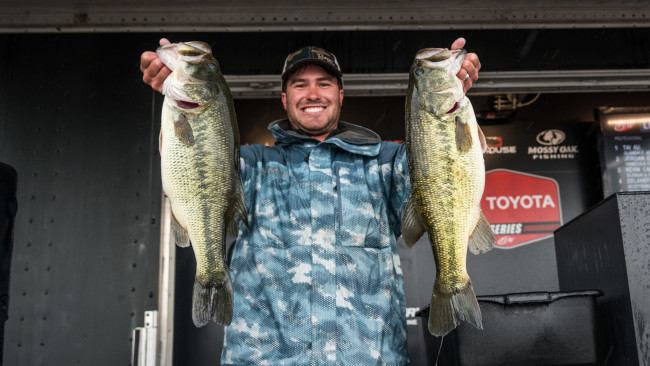 Also on the big-bass bandwagon today was Jordon Collom, who trails Au by only 2 ounces. Collom’s limit included a 4 1/2-pound smallmouth. Targeting both species was part of the plan, but the exact mix of brown and green fish didn’t turn out exactly as Collom expected.

“With the weather coming in I had no idea what I was going to do,” he says. “I saw big ones, and one of those [his keepers] was a bed-fish for sure, but the rest of them were all [caught] blind-casting a Senko. They’re staging and spawning. I was expecting to catch a super-mixed bag, but my largemouth just kept getting bigger.”

Collom started his day off looking at one on a bed. He quickly boxed that fish, then spent the rest of the day “just fishing,” blind-casting his Senko so he could stay far away from the fish to avoid spooking them and making them harder to catch.

“I’d rather not see them,” he says. “I’d rather catch them on the bed when they’re way far away. So I know some of those were spawners, but I never saw them.”

Tomorrow’s forecast and the torrential rains of Thursday evening have Collom unsure of how Friday’s round will go. Though, he’s still confident he’ll be setting the hook plenty. 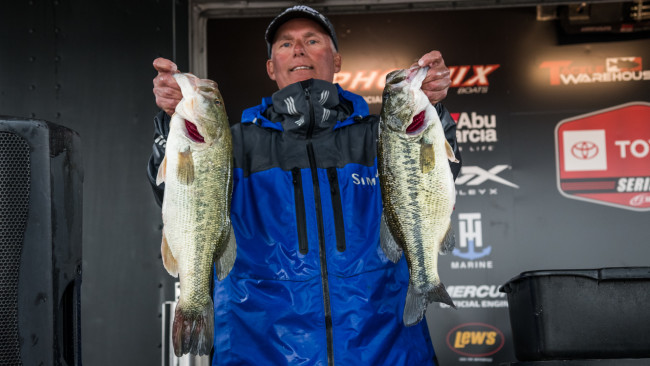 Kevin Caruso is one half of a father-son duo that’s currently in the top five. His son, Michael, is tied for fourth.

Kevin started off the day sight-fishing an incredible trio of bass that weighed 4, 5 and 6 pounds. While he caught several other while sight-fishing, the Arizona pro also mixed in some fish he couldn’t see.

“The day, really, I couldn’t have asked to go any better,” he says. “I had those couple of bed-fish, and then I just went fishing. I saw some fish. I knew the general area where they were. They weren’t on beds, and I caught every one of them.”

Not having to rely solely on the sight bite might be critical tomorrow, considering the amount of runoff gushing into the lake this evening.

“I’m just gonna go see. It depends what kind of rain we get and what it does. I thought maybe this weather was gonna hurt it, but I’ve got some other fish. I went and checked on some of my fish, and a couple more moved up in one cut. This is the perfect storm [as far as the timing of the spawn], and if we had really nice weather it would be really good.” 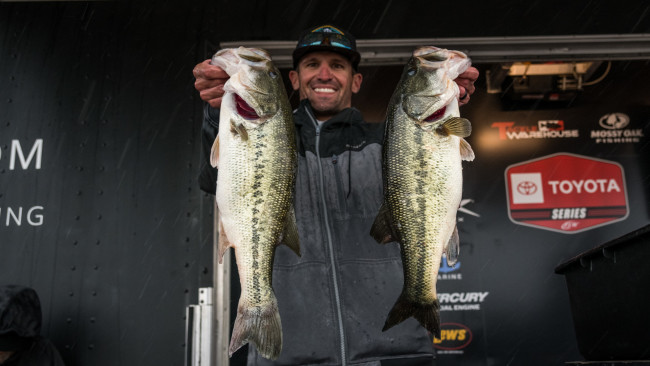 Michael Caruso has multiple reasons to celebrate today. He’s currently in the top five and just one spot behind his father, Kevin, and he’s also the proud new dad of a 2-week-old baby girl named Aria. If he had any complaints, nobody’d listen.

“We didn’t share anything,” Michael says of he and his dad. “He’s kind of doing his own thing. He came up on Saturday, and I didn’t come up until Monday, being that I have a 2-week-old at home.”

The key move for the Peoria, Ariz., pro today was putting the throttle down to get away from fishing pressure. A “good window” between 10 a.m. and 11 a.m. produced most of Michael’s fish. Then he let off the gas.

“I kind of had to scramble this morning. The first couple fish we ran to this morning, someone was on them,” he says. “So we just kind of made a run and found some fish, and luckily I caught a couple just fishing and caught a couple fish that I marked and was able to execute. I did some looking, and some of the fish that I marked are still there, so I should be able to duplicate it tomorrow.” 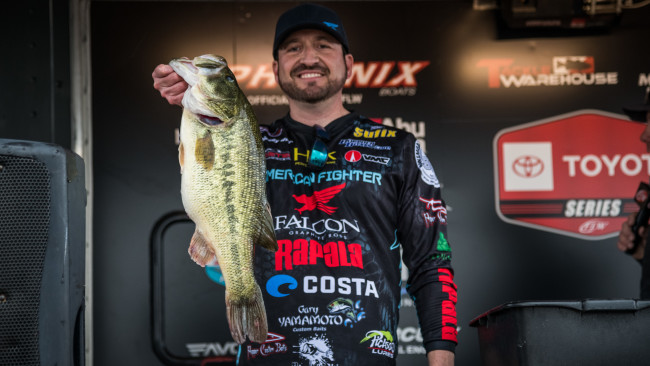 Dwyer crafted a game plan around catching both species.

“It went good to start. I started out in one of my smallmouth areas because I knew I had a few on beds that I knew I could get pretty early, pretty quickly. I got those pretty quick then moved to my largemouth areas, and the fish came up in the last couple days. Most of the fish I found were from a couple of days ago, and they moved up. They were just cruising around the areas the other day.

“I’d approach the areas and flip out there with a Senko. My two biggest fish I never even saw, but they were just cruising around. I fished mostly shallow, threw some reaction stuff, flipped a little bit, caught a few off beds, but flipping a Senko was kind of my main pattern. I left a bunch of fish out there for tomorrow, so we’ll see what happens. I don’t know if I can crack 23 again, but we’ll give it our best shot.” 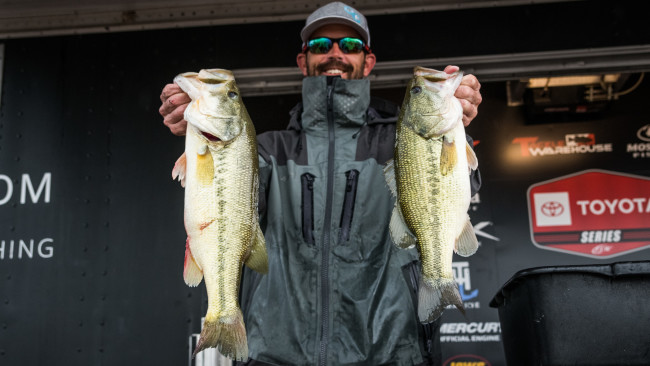 Faber in front in co-angler division

A quality 16-pound, 6-ounce limit has Colorado pro Ty Faber in front in the co-angler division. Today, Faber fished with pro Ronald Hammett and more than doubled up on his partner's catch. Faber leads current second-place co-angler Kevin Gross by only 5 ounces.