Top Patterns and Baits from the Cal Delta 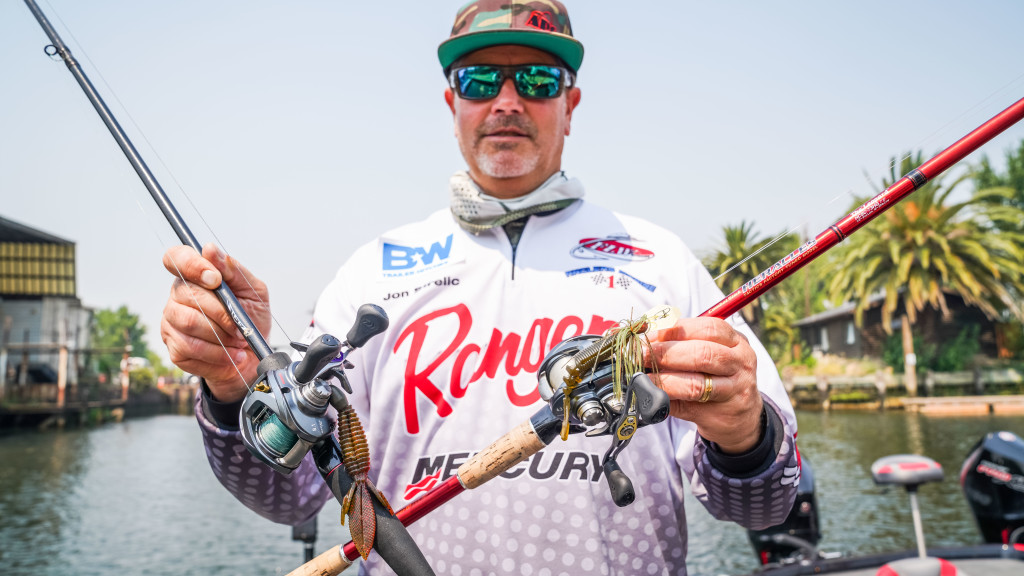 While a lot of things were different in the Toyota Series Western Division event on the California Delta – time of year, amount of time to fish and the odd haze from nearby wildfires – one thing remained the same: flipping, punching and frogging got the job done.

It’s really no surprise, considering the Delta is synonymous with big fish eating big baits in the grass. Most pros who finished in the top 10 stuck with the staples that work so often, but there were a few exceptions.

Read on for more details about how the top 10 caught them on the Delta and what they used to get it done. 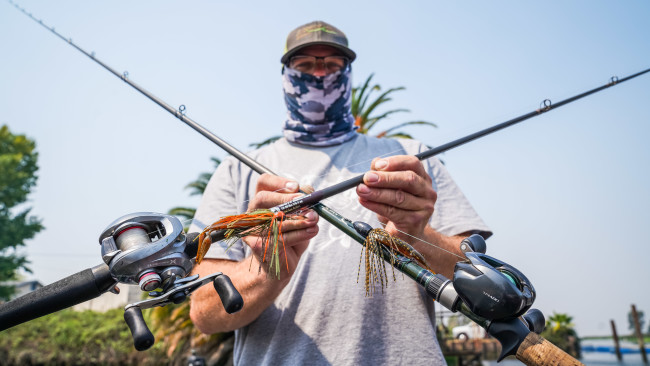 2. Joudrey adjusts on the fly for second

After taking the lead after day one, Oakley, Calif., angler Beau Joudrey struggled to replicate that success, but he still managed to stay in second place at the end of the tournament by adjusting his tactics.

"I expected the first day to be a better frog bite, but the fish were just coming up to the frog under the grass," Joudrey says. "They were just pushing it and weren't busting through to eat it. That told me to start punching."

His first-day stringer was the biggest of the week (24 pounds, 9 ounces), and all of that came by punching both a green pumpkin-with-red flake-colored Missile Baits D Bomb and a Zoom Brush Hog.

On the second and third days, Joudrey had to run around more and fought to get a limit.

"I started the second day punching and struggled big time," he says. "I had to scrounge out some fish because it just wasn't working. I started throwing a 1/2 –ounce green pumpkin Z-Man/Evergreen ChatterBait Jack Hammer with a Yamamoto Zako as a trailer."

He was able to fill out his limit the second day and again used this approach for his final-day limit after another unsuccessful attempt to get his punch bite going.

"I fished in Franks Tract, Mildred, Mandeville, a little in Rock Slough and ended up filling out my limits the last two days in Sherman," says Joudrey. "The key was fishing nice and slow through the grass, and the best areas all had current moving." 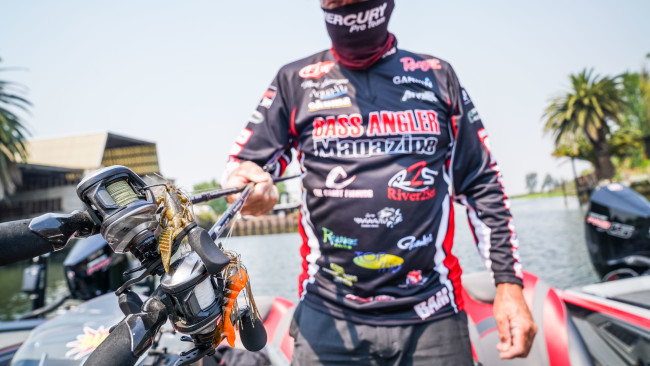 Mark Lassagne adapted with different techniques and credits punching, frogging and throwing a ChatterBait for his success.

"It was all in depths around 2 feet, but it had to be close to deeper water," Lassagne says.

The first day, he was able to secure two solid fish with a black Spro Dean Rojas Bronzeye Poppin' Frog, but the rest came by punching a green pumpkin Yamamoto Flappin' Hog and a Missile Baits D Bomb. Lassagne says all of his day two fish came by punching. 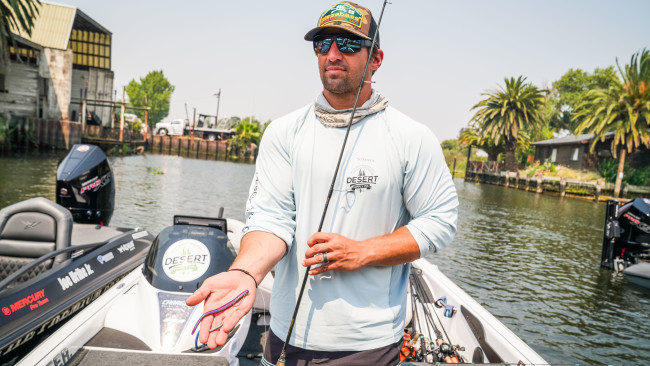 He reports catching 50 keepers on the first day in Franks Tract and that the bite got progressively tougher for him as the week went on.

"The first day was easy, and all but a couple of fish came on the drop-shot," Caruso says. "I caught a few on the Senko, but it was mainly the drop-shot on grass lines and edges. I was focusing on the water between 3 and 10 feet of water. It had to be right on the edge of the break where the channel came close to shallow water."

"I went with the flipping hook just to have some more strength," says Caruso, who also utilized heavier line than most for drop-shotting. "I was using 25-pound-test braid with a 14-pound-test fluorocarbon leader." 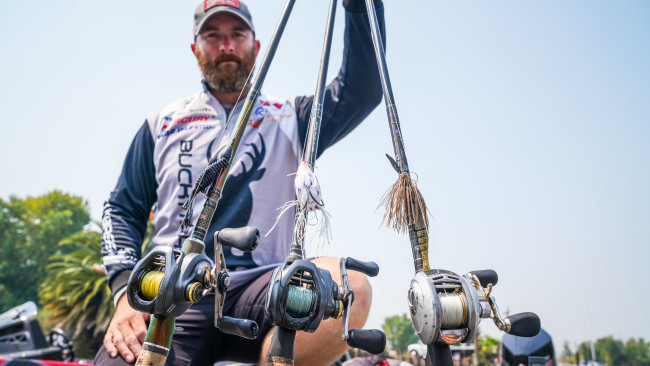 Wildfires in the area made for smoky skies all week, and Bryant Smith believes it affected how the fish were positioned during the event.

"I think that smoke made it like an overcast day and put the fish out on the grass edges," he says. "I covered a bunch of water on the outer edges of primrose with a buzzbait and a green pumpkin Strike King Thunder Cricket with a Strike King KVD Perfect Plastic Blade Minnow trailer."

Each morning, Smith was able to secure a quick limit with that approach before switching to punching and frog fishing later in the day.

"I was just waiting all day for the lower water after the tide went out because that helped to position the fish," Smith says. "I had two stretches with a little better-quality fish and got three or four good bites each day there with a frog and punching."

Smith used a white or black Strike King KVD Sexy Frog and a black-and-blue Strike King Rage Bug on a punch setup with a 1 1/2-ounce weight.

"I'd mix it up between white and black on the frog depending on the fish's mood," says Bryant. "I'd have that Rage Bug ready if one missed the frog and caught three fish this week using it as a follow-up bait."

Smith stayed close to takeoff at Big Break and stuck to shallow water.

"I don't like fishing deep here, so it was all less than 4 feet of water," Smith says. "I caught some right around Big Break and a little bit in Franks Tract. The frog stuff later in the day was right off of the main river." 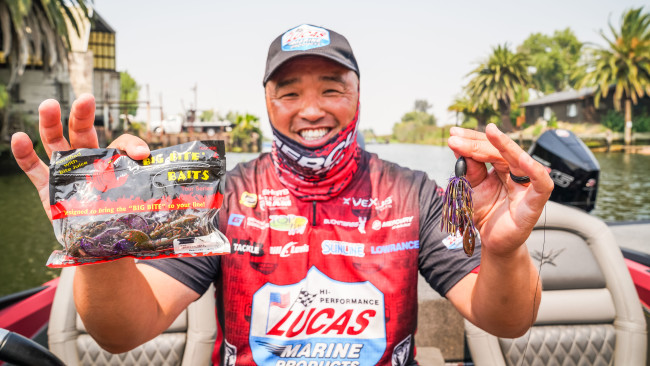 Going into the event, Ken Mah believed topwater would be the deal. It produced some fish for him, but punching proved to be best. This technique accounted for most of his fish, including the big bass of the tournament, a 10 pound, 8-ounce California Delta giant.

"Punching was just okay in practice, but it was better in the tournament," Mah says. "I needed a lower tide but never got it because of the tide schedule where I was fishing and the shorter days." (California has a six-hour limit on summertime tournaments.)

One key for Mah this week was downsizing his punch bait.

That bait accounted for most of his fish, including his double-digit on the second day.

"It was a textbook spot – a hyacinth mat with current and a little grass underneath," says Mah, who fished the northern and central parts of the fishery all week and keyed on water between 3- and 9-feet deep." 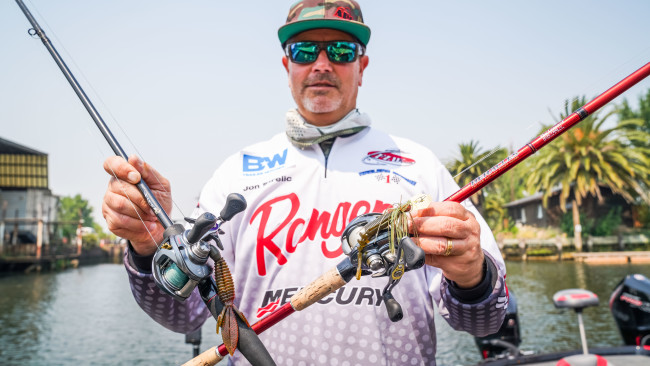 All three days of the tournament, Jon Strelic kept it simple. One lure accounted for nearly everything he weighed in.

Fishing in the southern section of the Delta in the Middle River and Victoria areas, Strelic fished a 3/8-ounce green pumpkin Z-Man/Evergreen ChatterBait Jack Hammer with a matching Yamamoto Zako trailer. He also punched up one bass on the final day, but the Jack Hammer did most of his damage.

"The three keys for me this week were current, corners and grass," says Stelic. "There would be little eddies in the current and baitfish were always there. The other key was that it had to be clean grass." 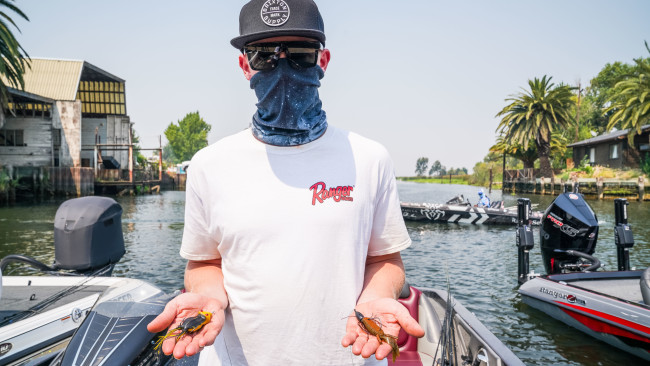 8. Huntze gets bit on outgoing tide

Logan Huntze of Discovery Bay, Calif., made the top 10 by relying on two Delta staples – frogging and punching.

"The first day, the frog bite was really good for me," he says. "I stuck with it all day and it worked out good. The rest of the tournament, I struggled to get them to bite it and spent my time punching."

His frog of choice was a Snag Proof Poppin' Phattie Frog in the Cali color (black and yellow). For punching, he used a 1 1/4-ounce weight and mixed it up between a Missile Baits D Bomb and Reaction Innovations Sweet Beaver, both in colors resembling crawfish.

Huntze targeted shallow water between 2- and 7-feet deep and focused on the middle and south sections of the Delta.

"It seemed like the best bite was right at the switch in the tide,” he says. “They were eating on the outgoing tide.” 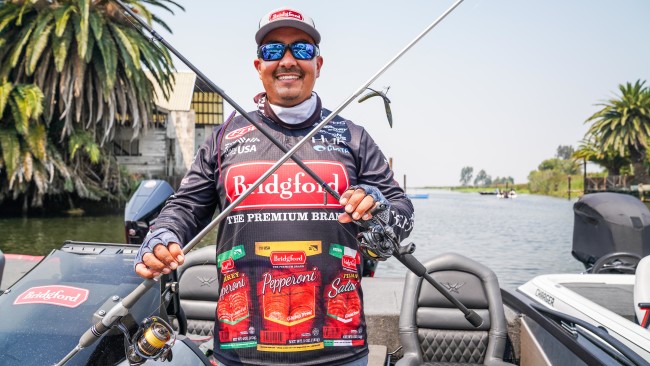 "I stayed fairly local because it was a short day, and I fished the bottom of Franks Tract and some around Sand Mound," Uribe says. "I mainly focused on the islands and not the levies and focused on sparse tules and holes in the weeds."

He fished an oversized drop-shot on a baitcasting setup and pitched to the tules and openings in vegetation. His power-shot setup included a 6-inch Roboworm Straight Tail Worm in the M.M.III color on a 3/0 Rebarb hook with a 5/16-ounce Voss Drop Shot weight.

His other technique was a wacky-rigged Reaction Innovations Pocket Rocket in sprayed grass. He fished it on a Daiwa Tatula Elite Takahiro Omori 7-foot medium/medium-heavy spinning rod matched with a Daiwa Exist 2500-size reel. He used the same braided line and dropped down to an 8-pound-test fluorocarbon leader. 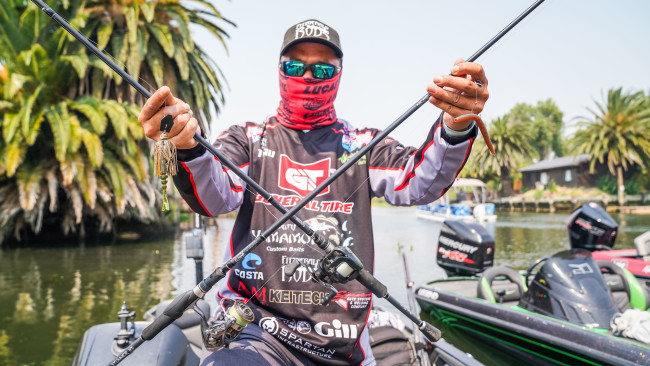 Arizona pro Tai Au says he fished conservatively in the event due to the shorter day and because he was also fishing out of a borrowed boat and didn't want to risk damaging it.

"I didn't want to run into some of my favorite areas because the water is so skinny," Au says. "I mainly stayed in Big Break, Franks, and Taylor Slough."

"The area I fished on the first day was really clear and the fish were spooky," Au says. "I would skip that Senko into the back of little tule pockets with a Fitzgerald Fishing spinning rod. I couldn't get them to eat the 6-inch Senko, so I had to use the smaller one. The bass were eating bluegill, so dipping the tail of the bait in chartreuse dye [worked]."

The second and third days were mainly a ChatterBait and frog bite for Au.

"I was throwing the frog just trying to get bigger bites," Au says. "As the tide dropped, I could see the grass edges better and started fishing the grass lines with the ChatterBait. The best areas were the corners with sparse tules and where the sloughs turned and made a point."