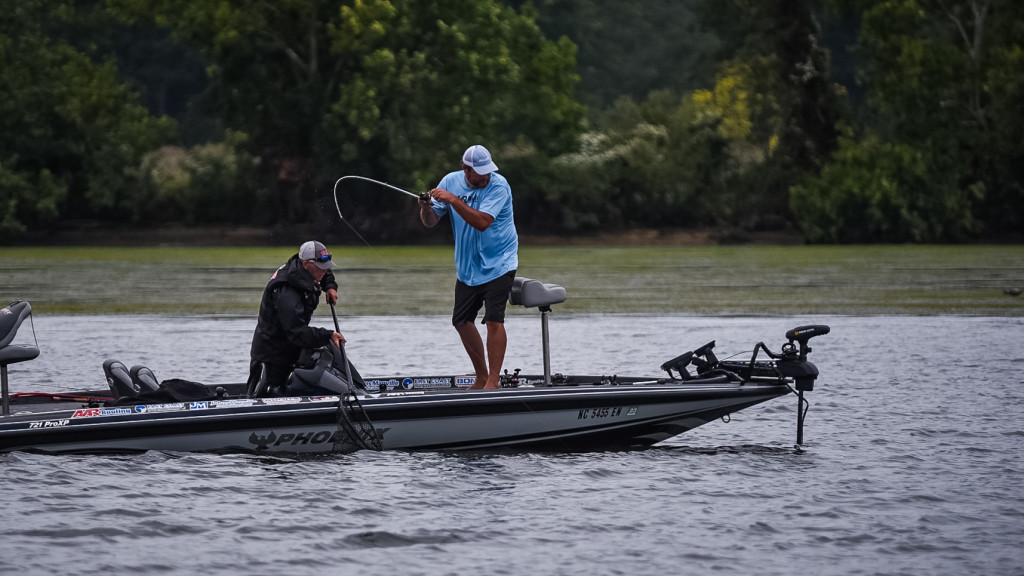 It was a gloomy start to the first day of competition for the Toyota Series Eastern Division event on the Potomac River, and though it seems like a fishy day, so far the fish don’t seem to think so.

One of the biggest issues facing anglers this week is the tide. A low tide is an angler’s best friend on a fishery like the Potomac, but with low tide occurring right around 7 a.m. ET this morning – also when takeoff was – most of the day’s best fishing was going to happen fast.

Taking advantage of the narrow bite window was tidal fishery ace Wayne Vaughan, who reported an early limit worth around 12 pounds. Vaughn was one of many pros targeting some of the bigger grass flats on the main river today and while he’s off to a decent start, he’ll likely need a kicker to help push him to the top of the leaderboard.

Another angler getting off to the right start was Liam West, who only arrived at the event last night and is fishing without any practice. West had three fish worth 9 pounds when we checked on him, which isn’t surprising considering the young pro finished sixth at the Abu Garcia College Fishing presented by YETI National Championship presented by Lowrance last year on the Potomac.

Elsewhere, Tackle Warehouse Pro Circuit angler David Williams has two in the box, but he says one is a “good one.” Still, they weigh about 4 pounds total. Aside from that, our on-the-water crew never got eyes on the likes of Kurt Mitchell, Mike Iaconelli and Bryan Schmitt, who are definitely atop the watchlist for this event. The general reports from others we checked on were a fish here or there, but the bite certainly slowed as the clock ticked closer to noon and the high tide.

Scattered rain showers have littered the area throughout the morning and look to continue that trend as the afternoon progresses. Weigh-in starts at 3 p.m. ET, so tune in to see who took advantage of the morning bite to get off on the right foot.