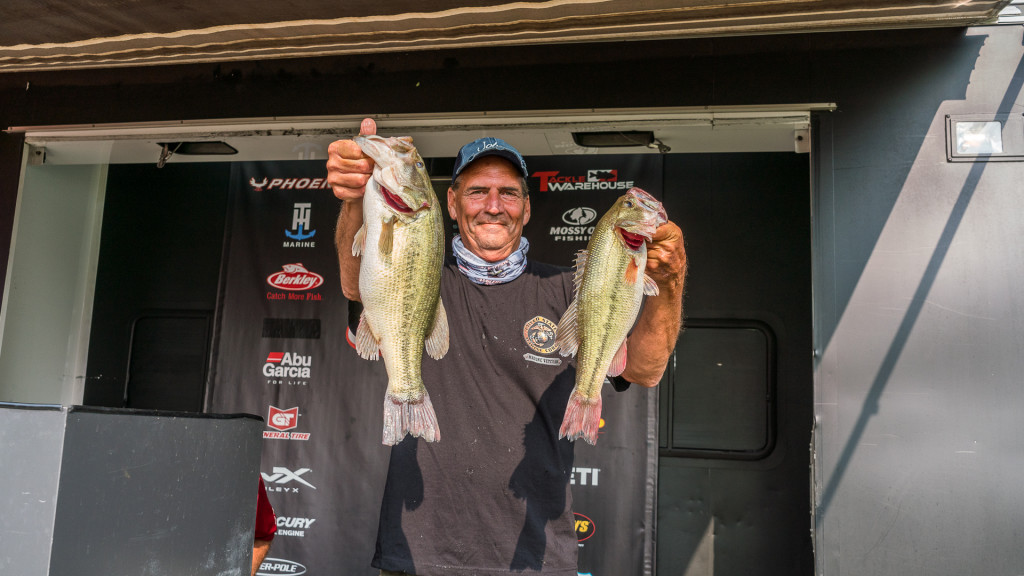 Backing up his day-one weight of 13 pounds, 6 ounces, Joe Bennett brought 13-14 to the scale to take the lead at Lake Dardanelle in the Toyota Series Plains Division opener presented by Fish-Intel. Bennett will carry 1-1 lead into Saturday’s final round over Kevin Riney as he looks to grab his first victory with FLW.

Starting the day in fourth place, Bennett continued his Thursday pattern by throwing his own custom-made spinnerbait in the mid-lake area. He says his pattern is stable and that it will remain strong for one more day.

“I’m very optimistic,” says Bennett, a survivor of colon and stomach cancer. “I’m not a bragger. I’m a Christian. Whatever God decides, that’s what I’m going to do.”

What Bennett has been doing is running a few different patterns and the key ingredient is versatility.

Although the water level did not fall in the mid-lake area as much as in the upper lake, Bennett says it dropped enough to reposition the fish, and it took him a while to find them again.

“They pulled away,” Bennett explains. “Yesterday they bit all day long. This afternoon it got pretty darn tough. I had my fish early, and I had my limit by about 9:30. I even culled a few fish, but it wasn’t like yesterday.”

On Thursday, Bennett started his day by catching a 4-pounder. His last fish today weighed 4-9.

“I needed a kicker and I got the right bite,” Bennett says. “I had a 14-incher that I really wanted to get rid of to make up for some lost weight yesterday.” 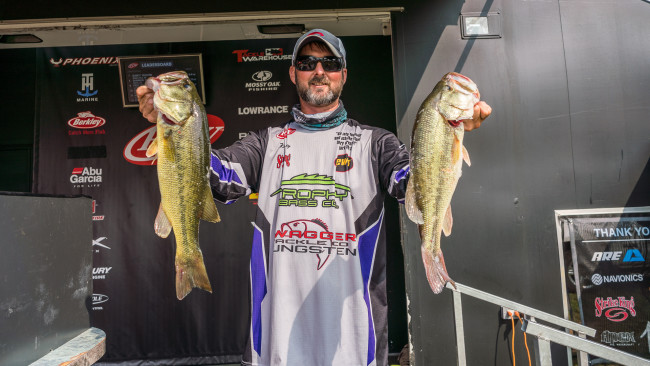 While Bennett has the most consistent weights, Kevin Riney made the most dramatic improvement Friday by catching the heaviest bag of the tournament so far (15-3). His weight improved 4-3 over Thursday and vaulted him from 16th place.

“It was tough. It was a grind, but I caught quite a few in a backwater on a spinnerbait,” Riney says. “Then I went to some pads that have some big fish in them and made a cull or two and ended up with a really good bag.”

Riney started hot, catching three keepers in the first 20 minutes with a spinnerbait. A long dry spell ensued, but Riney outlasted it and caught enough to complete a limit and cull twice. A fast retrieve was the key.

“I’m in stained water getting as close to the bank as I can get and running as fast as I can reel it,” Riney says.

Like Bennett, Riney fished in the mid-lake area where the water level did not fall as much as in the upper lake. Still, it probably repositioned his fish, as well.

“Hopefully the water will hold off another day,” Riney says of the falling water.

With most of the field concentrated in the upper lake, Riney had his area all to himself  today.

“All those boats are sharing fish,” Riney says of the other competitors. “I tried to find an area I can keep to myself. So far it’s worked out.

“Man, it’s awesome to have it all to yourself. You can fish down a bank, let it rest, go back down it and just take your time and do whatever you need to do. I’m loving it.” 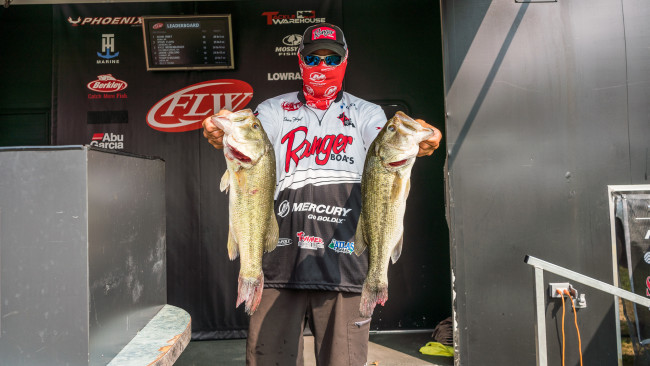 Fishing far upriver, Steve Floyd appeared to be a casualty of falling water levels, but he adjusted late in the day to catch five keepers that weighed 12-4. Still, it was enough to slide him up from fifth and keep him in contention for his second Toyota Series title.

“I ran up the river fishing a backwater like I did yesterday, flipping trees, and it was tougher today,” Floyd says. “The water has fallen a little bit so they’re a little off the bank. I’m fishing real shallow and it has hurt that. I’ve had to adjust and fish a little bit deeper, find some deeper banks.”

Falling water is an unwelcome variable that keeps anglers from settling into a groove. Floyd says it’s a struggle to adjust to fish that are forced to move away from the bank.

“It plays with your mind,” Floyd says. “You wonder if you should leave and go try to find a different area.

“I’m in an area where I know there’s a lot of fish. They bite in the morning, and then for two or three hours it’s real tough, and then they bite a little bit in the afternoon. You just have to stay focused and stay mentally into it and not spin out. I only had two for a long time today, but I ended up catching three in the last hour.

“That’s what you have to hope for. Luckily that does keep you thinking they’re going to bite anytime.” 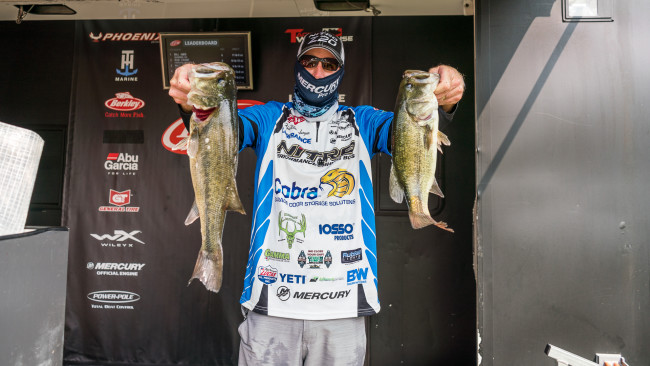 Fishing heavy, shallow cover in the lower part of the lake, Kyle Weisenberger cobbled together a five-bass limit that weighed 11-2 today to keep him inside the top five.

“I went to one pattern today and it took all day, but I did get a limit,” Weisenburger says. “That’s huge because this place is fishing really tough right now.”

The water level on the lower portion of the lake has remained stable, so falling water was not an issue for Weisenburger. His pattern is solid, but he says there are too few areas to employ it effectively. For that reason, having his water to himself is vital.

“Today I ran a lot of new water,” Weisenburger adds. “I’d be close to something that looked good, and I ran over there, but I only added one extra spot to my actual productive water. Everything else didn’t have enough water on it or it didn’t set up right. That’s all I’ve got for tomorrow, but I didn’t leave anything behind because I needed it all just to make tomorrow.”

Even so, Weisenburger’s pattern is stable to slightly ascendent. A cold front would help a lot, he says.

“My only problem is I don’t know how many I plucked out of those areas, but as far as the pattern, if I could find more areas like them, I truly think I’m on the right quality,” he says. 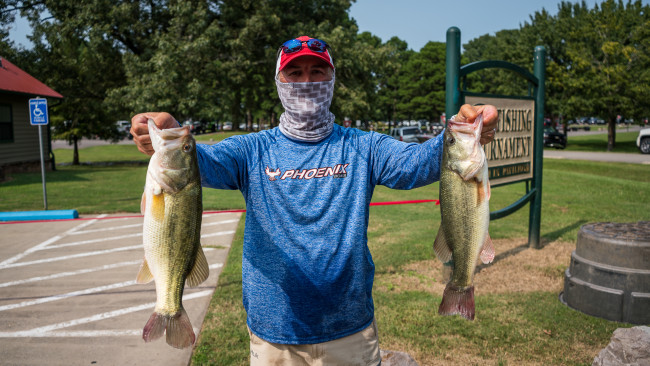 After Kevin Riney, Jason Lieblong enjoyed the most dramatic improvement in weight Friday among the top five. His 13-pound limit vaulted him from ninth place.

It didn’t come easy, though, and he almost knocked himself out of contention with an unforced error.

“I didn’t catch my first keeper until after about an hour, and I caught two more pretty fast on topwater,” Lieblong says. “I made a mistake and started running around. I went every place I caught fish in practice. That’s what you do, but everything produced zero.”

Lieblong knew that leaving his primary area was a mistake, but it took about two hours for him to correct.

“My co-angler was like, ‘What are you thinking? You left Point A when we were catching fish.’ I was like, ‘You’re right. Let’s go back to Point A,’ and we finished out a limit right there.”

The critical difference was that Lieblong adjusted his technique.

“I said, ‘This is not working. I’ve got to start finding some moving bait.’ And then it was lights out.”

“My area has some willow grass and some wood, and a lot of it is just bare bank, just flats,” Lieblong says. “Everyone knows you’re going to catch them in 3 feet or less up to about 8 inches. I’m a shallow-water fisherman, and I keep after them until I find them.”

Having his water to himself will be a huge relief, Lieblong says, because boat traffic repositions fish in shallow water.

“Practice was good until all the boat traffic started coming in because river fish are shallow,” says Lieblong. “When those waves start coming in, it just beats them and pushes the shad back out. I’m in an area where no boats are around me, and that helped out.”

With only 10 peers on the water on Saturday, Lieblong is confident his area will be in prime condition if local anglers and recreational traffic is not heavy.

“I’ve been out here all summer fishing a lot of the derbies,” Lieblong says.  “Mentally the recreational traffic is not going to bother me, but I’m hoping everybody stays home and watches college football tomorrow.” 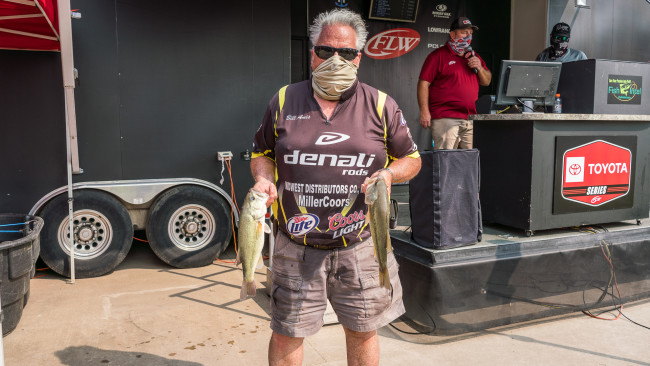 Despite catching just two fish Friday that totaled 4 pounds, Bill Amis of Shawnee, Kan., held on to the lead in the co-angler division with a two-day total of 15-5.

“I was worried, but I was happy to catch two,” Amis says. “It was a lot tougher today.”

Pitching and flipping shallow cover in a tiny backwater, Amis got what he could.

“There just wasn’t room enough for me to do it,” Amis says. “The boater was headed into the wind and he was in 2 and 3 feet of water. There was just one piece here and one piece there and he said, ‘I hate it, but I’ve got to do it. By the time I got there it was all used up.”

Amis says that’s the reality of being a co-angler. Opportunities are limited.