Cook Still Leads on Lake of the Ozarks 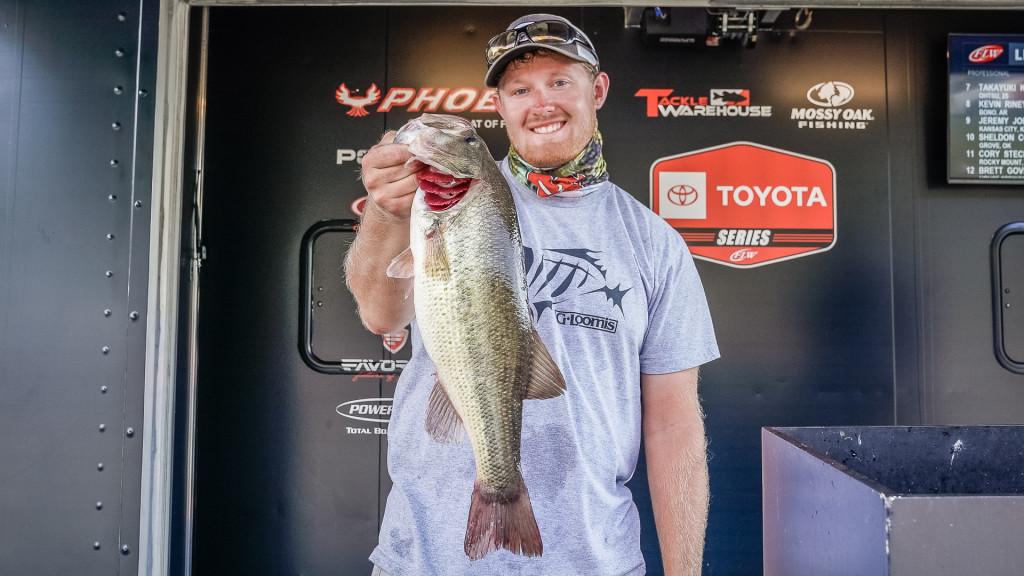 You know you’re on a good pattern when you stumble and still bring in the fifth biggest bag of the day. That’s the enviable position Corey Cook finds himself with one day left.

After blowing away the Toyota Series Plains Division field yesterday with 23 pounds, 9 ounces, the 20-year-old Lebanon, Mo., pro came back down to earth a bit today. He struggled to get much going early, and if not for a kicker late in the day, a stumble could’ve turned into a fall. Still, his 15-4 bag of Lake of the Ozarks bass brought his total to 38-13, which was more than enough to keep his lead.

“It was a lot tougher day,” says Cook. “I don’t really know what the difference was. It was just a tougher day. I don’t know what to say.”

After getting two big bites to start yesterday, Cook’s dock pattern produced a lone 2-pounder within the first two hours. Fortunately, a move to a slightly different location produced three fish around 9 a.m., but he would only catch two more keepers the rest of the day, with a 4-pounder coming around 1:30 p.m. 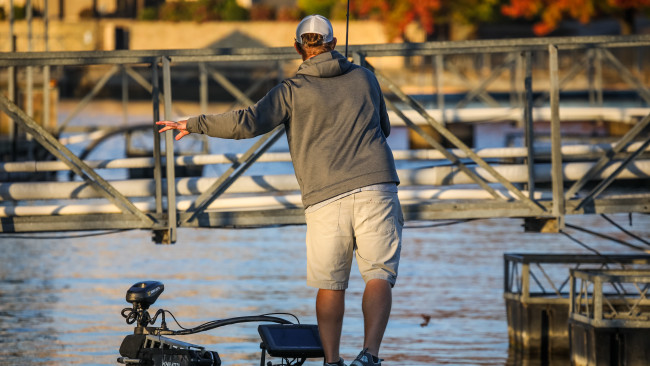 With how well he’s been finishing in local events recently, many have wondered what all he’s been doing; if it was some unique pattern. Turns out, it’s one of the biggest staples on the lake – just pitching a jig to brush under docks. And despite the tougher day, he’s not about to change.

“I’m not going to change,” says Cook. “This is what I always do, and it’s what I’m going to keep doing.”

One thing he noted is despite having dozens of brush piles to hit, he did try to re-hit a few today that were productive yesterday, but none of them panned out. That may be his only change tomorrow.

“I don’t know if I’ll re-fish anything tomorrow,” says Cook. “The one spot was loaded with fish today, and I milked it pretty hard. So, I may hit it again tomorrow, but I may just go and jump on all new stuff.”

He may need everything he can tomorrow considering those chasing him. The six closest anglers behind him – Andy Newcomb, Shane Long, Roger Fitzpatrick, Brent Chapman, Lawson Hibdon and Jeremy Lawyer – have combined for multiple victories and more than 20 top 10s on Lake of the Ozarks, with Chapman and Lawyer also being top-level pros.

Still, Cook couldn’t be more excited to get back out on the water for one more day.

“This is the biggest tournament I’ve ever fished, for sure,” says Cook. “So, it feels great [to be leading]. I hoped I would do well, but to be leading is absolutely awesome. I couldn’t ask for anything better.” 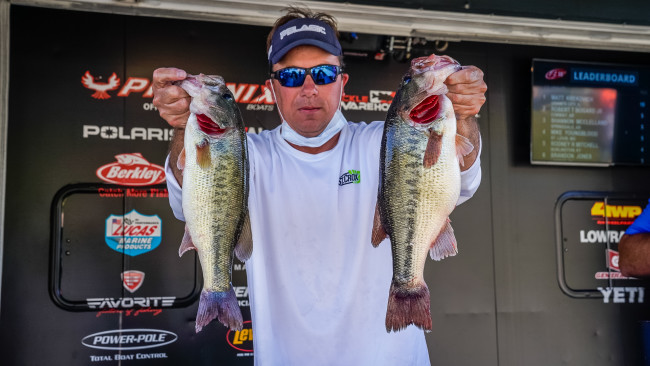 He figured he needed 6 pounds to fish on Saturday. Instead, Matt Krekovich brought in the biggest co-angler bag of the event.

The co-angler from Granite City, Ill., weighed in 13-2 on day two on Lake of the Ozarks. After sitting in fourth yesterday with 10-7, he jumped into the lead by almost 7 pounds with 23-9 total thanks to being the only co-angler to weigh a limit both days (and one of only two co-angler limits today).

“I started out and within the first hour and a half I had one close to 5 pounds and a 3-pounder,” says Krekovich. “I had three fish by 9 a.m., but then I struggled the rest of the day to get the other two. I finally did and never culled.”

Fishing with pro Justin Hayden today, he says he mixed it up with jigs and Carolina rigs, with his two biggest coming on the Carolina rig. It was the opposite yesterday, when jigs accounted for his bigger bites while fishing with Drew Sagely.

All of it is a welcome change from last weekend, though.

“I have a place down here and fished the Big Bass Bash,” says Krekovich. “We really struggled. So I'm happy to have all the things fall into place like they have so far, and hopefully I can do it again tomorrow and bring home the win.”