J-Mac drops behind his brother heading into final day 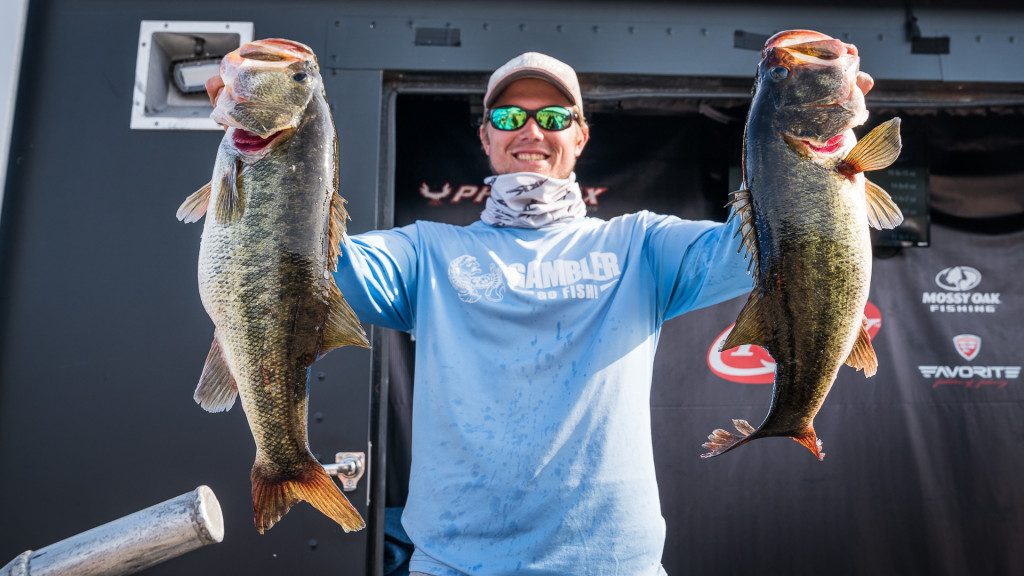 Lake Seminole is under attack: a Mac attack!

On day one of the Toyota Series on Lake Seminole, Jared McMillan weighed in 21 pounds, 10 ounces to take the early lead. His younger brother, Dillon, weighed in 13 pounds and sat in 20th place.

Well, apparently that first day did not sit real well with Dillon, who returned fire today with a massive 24-pound, 4-ounce limit to take the lead away from his brother with a two-day total of 37 pounds, 4 ounces. It seems as if Lake Seminole has become the battleground for a McMillan showdown tomorrow, the final day of the event.

This is not the first time the McMillan name has done battle at Ol’ Sem: Brandon McMillan, the oldest of the brothers, has won two regional level events on Seminole in the past. Obviously, there is something about Lake Seminole’s waters that just clicks with the McMillan family.

“This is my first time fishing this lake,” Dillon says. “I know my big brother has done well here before and it’s grass fishing, which is something we all grew up doing. This lake just really fits the way we all like to fish.”

Today, Dillon’s success started with a jerkbait in the morning.

“I could see the fish chasing bait on my LiveScope,” he says. “I watched them eat my bait on the LiveScope. I caught four or five on the jerkbait and one of them was a 7-pounder.”

Actually, it was a 7-pound, 3-ounce bass, which took the big bass honors for the day.

Once the jerkbait spot evaporated, Dillon moved over to another area that featured a line of deep hydrilla and began flipping.

“I actually wanted to keep fishing the jerkbait, but when it died, it died,” he says. “Everything just went away – the bait, the fish – gone. At that point, I decided to just commit to flipping deep hydrilla the rest of the day.”

Dillon ended up getting about seven bites in the hydrilla, which pushed his limit past the 24-pound mark.

“The hydrilla spot I ended up catching them on I didn’t even really fish yesterday,” he says. “I got a couple of bites there in practice and sort of put it in the back of my mind as a possibility. It turned out to be a pretty good spot.”

Dillon will lead his brother Jared by 4-1 going into the final day. 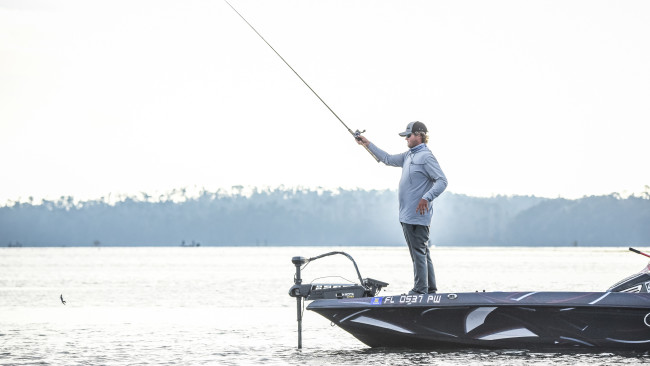 Day one leader Jared McMillan slipped back a spot with an 11-pound, 9-ounce limit today.

McMillan believes the fishing pressure finally got to his primary area from day one.

“I actually got more bites today, but they weren’t really eating it, just nipping the bait,” he says. “That’s usually a sign that they’ve wised up. Between yesterday and today, I really have leaned on that place hard. And there have been a few other boats around as well.”

After watching his brother Dillon weigh a huge limit today, McMillan believes his brother found a fresh school of fish that had just moved into the grass.

“Obviously, we don’t know what the heck those crazy fish do down there,” he says. “But my opinion is that they chase shad and big gizzards around out in the main creek channel in the mornings. Then when the sun gets up, the shad disperse and boats start idling around, the schools of bass pull up into the nearest grass to hide.”

“I think that’s what I found yesterday – a fresh school that hunkered down in the grass.” He continues. “Today my brother found a place like that where he was fishing. Once you beat one of those places up for a day and it doesn’t replenish, it’s done until another school moves in. But that’s just my theory on it.” 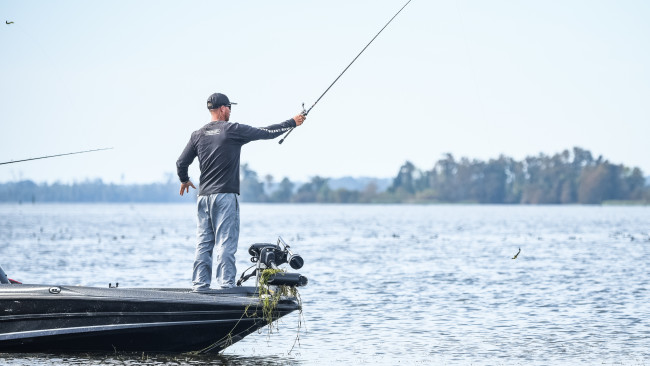 Mikey Keyso moved up to third on day two with the help of a 14-pound, 3-ounce limit.

Keyso is also flipping in the Spring Creek area and is trying to put the odds in his favor by being as stealthy as possible.

“If I can get any wind, I won’t touch my trolling motor,” he says. “I’ll just line up a drift over a big mat behind the deeper lines that everyone is fishing and see if I can access some untapped water. I think the more guys go around on those outside lines with trolling motors, the more it pushes them up into the interiors of those mats. But the water on the insides is shallower and clearer so you have to super quiet not to alarm them.” 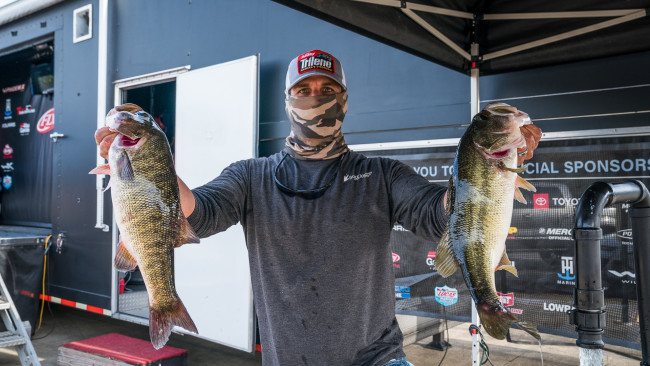 For those weary of hearing about ultra-spooky fish in Spring Creek, it’s time to hear about a couple of other patterns working on Lake Seminole. For the second day in a row, Keith Poche ran his boat far up the Flint River to bag another solid limit of fish. Yesterday he weighed in all largemouths by flipping to logs and cypress trees creating eddies in the current. Today, he had to resort to rocks to catch a few shoal bass to bolster his catch.

“That largemouth bite on the bank just died on me today,” he says. “I don’t know if the current slowed up or what. But I couldn’t catch them on wood today and I had to switch to rocks with a spinnerbait just to finish out my limit.” 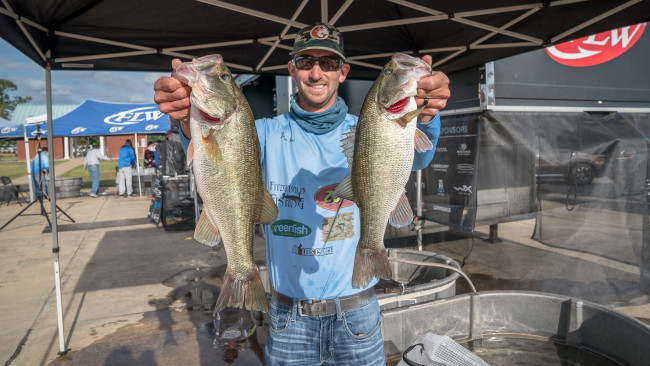 Bryan New has been the first person in the top five in the last two days to mention the words, “Chattahoochee River.” New has found a wad of fish in the “Hooch” and lit them up.

“I found a spot over there today where I caught them literally, and I mean literally, every cast.” He says. “At one point I caught ten in a row. It was crazy – especially for this lake.”

New says his pattern is all bait related.

“Current has piled a ton of bait into this one area, I mean it is stacked in there,” he says. “I’m throwing shad imitating baits in there and when I find the right cast it’s just fish after fish.”

New says the fish are not all big ones and he has to weed through quite a few to start putting on weigh in the livewell, but by the end of the day he can cull up to 14 to 16 pounds.