Branagh Comes from Behind for Okeechobee Win 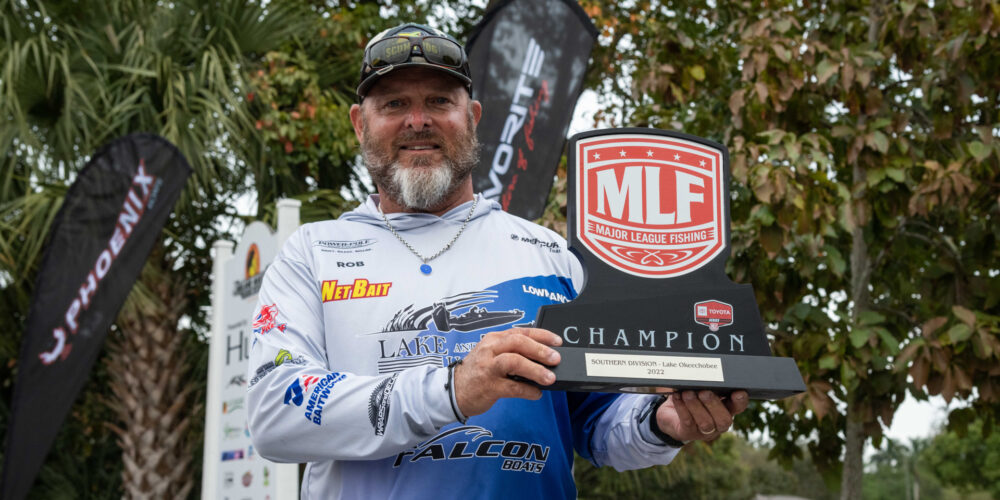 CLEWISTON, Fla. – Consistency was key in Rob Branagh’s victory in the opening event of the Toyota Series Presented by A.R.E. Southern Division schedule at Lake Okeechobee. Over three days, the Malabar, Florida pro weighed in bags of 15-1, 16-9 and 19-11, respectively, hanging tough on a fantastic fishery that wasn’t fishing so fantastic throughout the course of the event.

While plenty of other pros weighed in bags bigger than Branagh’s Day 3 total, none managed to be consistent enough to outpace him amidst the everchanging conditions on the Big O. After a cold snap rolled through prior to (and during) practice with a warming trend beginning Wednesday, every angler in the event knew they would have to make adjustments get the job done.

For Branagh, though, those adjustments proved to be minor. Instead of needing multiple areas and varied patterns, he stuck with what was working and the fish kept coming to him.

“To fish against [270 other] anglers and probably 100 of them are heavy, heavy sticks – and very familiar with Lake Okeechobee – fishing with those guys to me was making my odds even worse,” he said of his secluded area at the south end of the lake. “I knew I needed to get away from them to even have a chance.”

The area in question was nothing too out of the ordinary for Okeechobee – essentially a shallow spawning area loaded with grass where bass would be moving into in waves. But unlike many pros, who spent time looking for areas with clean, hard bottom, Branagh’s spot was littered with decaying cattail stalks rooted in mud.

In that area, Branagh benefited from seeing very few boats all tournament, meaning the fresh waves of fish moving into that area were all his. It just came down to finding a presentation that would catch them.

“I was slow-rolling the Big Bopper by NetBait,” he said of the bait that caught every fish he weighed in. “I caught some fish on a ChatterBait, which, obviously you move it faster. I actually made my own ChatterBait with a 1/8-ounce weight on it so I could roll it slow. I did catch some fish on that, but nothing that went in the livewell.”

“I’m a 100-percent believer that I think the Bait Fuel had a lot to do with the bigger bites, because not one time did I have a fish bump it and not hold onto it,” he said. “My plan [each day] was to catch five on the Big Bopper and then go ahead and go to a bigger bait to try to catch bigger fish, but the fish just kept getting bigger and bigger and bigger on that Big Bopper, so I honestly never put it down all weekend.”

While things went pretty much according to plan for Branagh all week, Saturday wasn’t without its drama – namely, a lost giant that had Branagh sweating.

So close that Branagh stared intently at the scales as Day 2 leader and Okeechobee hammer Brandon Medlock (closing in on his fourth Toyota Series victory on the Big O) put his fish in the basket. As Medlock’s weight appeared on the screen, Branagh threw his clenched fists in the air and let out a scream of exultation.

“I honestly thought Medlock was going to smash them because he’s such a good stick on this lake,” Branagh said.

Add besting Medlock to the elation that was securing Branagh’s first-ever MLF victory and largest tournament win of his career on a lake he fishes about once a month in various local tournaments and circuits.

As for the $65,000 in prize money, Branagh admits he hadn’t given much thought to what to do with the windfall, though it didn’t take him long to come up with an idea.

“My daughter works her butt off – my youngest daughter – she’s got two kids and she’s got a hard life and I’m probably going to buy her a car,” he said, holding back the emotion of it all.

And it’s easy to be emotional when you’ve bested a massive tournament field over three days for a massive payday and a Toyota Series trophy. For Branagh, it was already money in the bank.

“My goal coming into this, honestly, was to make the Top 25,” he said. “Anything after that is just a true blessing.”