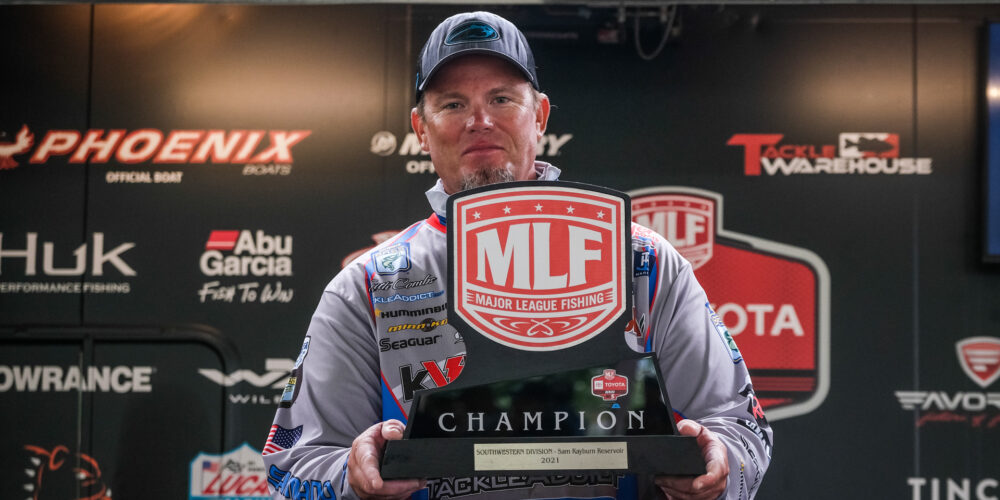 Though he put just 10 pounds, 15 ounces on the scale on the weather-shortened final day, Keith Combs really didn’t need all of it to win the Toyota Series Presented by A.R.E. event on Sam Rayburn. With a total of 63-3, Combs won by more than 8 pounds to take home $36,764 and his first win with MLF.

Startingly, Combs says it was actually his first win of any kind on Sam Rayburn, which seems impossible considering his Huntington, Texas, address and his years as a top-level pro angler.

“I’ve fished very few tournaments and not had a top 10 or 15 on this place,” says Combs. “I’ve finished second and third, but never won one. That was fun, I always wanted to.”

Weighing 22-9 on Day 1 and 29-11 on Day 2, Combs staked himself to a lead of more than 17 pounds heading into the final day. After a weather delay at takeoff for storms that lasted more than 2 hours, Combs was forced to scramble a bit to make sure of the win.

“The first couple days were really easy, but today, man, we didn’t have enough time,” says Combs. “I went to try to catch a couple big ones, but I had to just catch some fish. I would have loved to have had a full day to go out and stand on ‘em and try to catch a big bag again. They’re definitely there, it was fun.”

On Day 3, Combs ended up altering his strategy and put a jerkbait and a crankbait in hand to nab a limit.

“Today I just went and caught schooling fish on a little gravel bar,” says Combs. “It has a ton of 2- and 3-pounders. I hadn’t fished there all week, but I felt like I just needed to go catch a limit of fish today, so that’s what I did.”

On the first two days, Combs did what he’s famous for – catch big bass offshore.

“I stayed out, I cranked, I threw a big spinnerbait and a big swimbait,” says Combs. “I fished a lot of different spots, some of them were shallow, 4- to 6-foot. Some of the fish I’ve caught this week have been as deep as 16.

“It was good – we had a good calm day that I could move around in, and I had a 3:30 check-in,” says Combs. “That gave me the confidence to go try to win and fish for big ones. And it worked. It doesn’t always work, but it worked yesterday.”

Combs says he targeted a mix of hard spots on points and flats and isolated stumps. For the stumps, he could often pull up and make just a handful of casts, but he found himself fishing around a little more on the other offshore areas.

“I used Humminbird MEGA 360 a lot, the stumps I know about, but a lot of the stuff was real big flats, and main lake points,” says Combs. “I would pull up, and I could look at 360 and fish around, and eventually you might see a fish or two. Then at least I knew which direction to throw. They’re big areas, so it was very important to run that this week.”

For his baits, Combs says he used a big single swimbait, a 1-ounce Strike King Bottom Dweller Spinnerbait in blue glimmer, a Strike King Magnum Squarebill 4.0 in Tennessee shad and a Strike King 6XD in chartreuse and blue.

Coming off an uncharacteristic showing in Texas at the recent Bassmaster Elite Series event on Lake Fork, Combs had a little extra juice this week.

“I had a few really tough breaks on Lake Fork and got in a bad rotation of spots the first day,” says Combs. “I threw myself behind the eight ball, and you’ve got to do what you can do at that point. I was disappointed with that finish – I had three days of practice here and fished daylight ‘til dark, so I was mad at ‘em.”

With his fourth-place finish in the standings and his win, Combs is now qualified for the Toyota Series Championship this fall on Pickwick Lake. From the sounds of it, he’s going to be a handful.

“I’m excited about that,” says Combs. “That’s a big money tournament, it’s pretty good to get an opportunity to fish for that kind of money. To me, it’s pretty incredible to fish for that kind of jack without having to spend $50,000 in entry fees. I think it will be a really good tournament. I got the opportunity to see what really lives in Pickwick when we were there for the Elites, and I know it will be tougher in the fall, but I think I’ll get a lot of practice time and I’m excited about it.”

Tallying a total of 36-1 on the week, Kevin Carter picked up the win on the Strike King co-angler side. With over 50 events fished with MLF, this was Carter’s first win, and it was a good one, as his final-day bag of 13-12 boosted him to the top and earned him a new Phoenix boat. In addition, Carter finished eighth in the season standings for the Southwestern Division, which will handily send him to the Toyota Series Championship this fall.