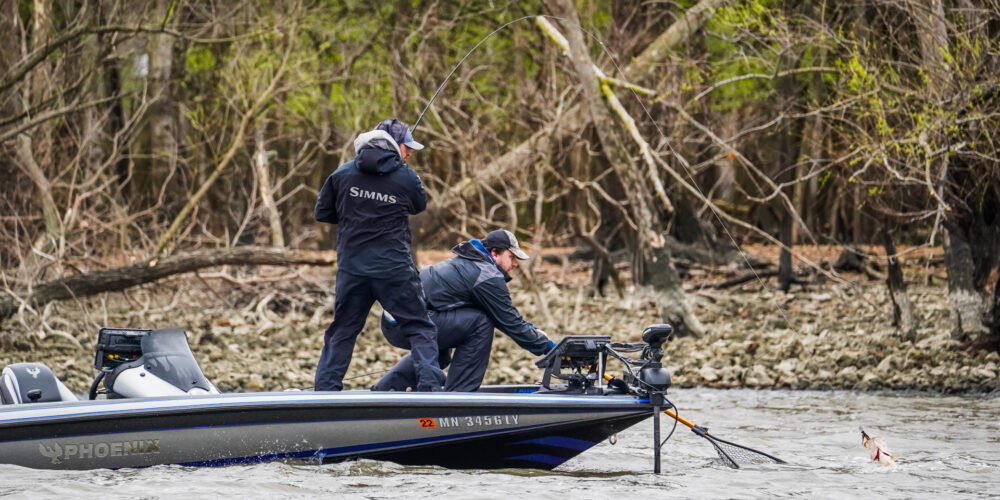 After thunderstorms passed through the area Friday night, the Top 10 pros set out on Grand Lake for the final round of the Toyota Series Presented by A.R.E. Plains Division event Presented by Fenwick with cool, cloudy and windy conditions.

While it may not be comfortable to fish in, the fish don’t seem to mind, and the majority of pros were catching fish right away this morning.

Leader Andy Newcomb started the day with just a 1-pound, 5-ounce edge over second-place pro Chris Jones and a 3-5 edge over 10th. Yesterday, Newcomb found a stretch of bank near the mouth of the Elk River where he culled from a 10-pound limit to the 19-pound bag he brought to the stage. He started on that bank this morning – and plans to stay there all day – throwing a spinnerbait and a jig. Eventually, as the morning progressed, he put a limit in the boat worth 11 pounds and is now hoping the females push up as the afternoon wears on.

With a selection of crankbaits, jigs and spinnerbaits on his deck this morning, Chris Jones was ready to swing today. As of noon, Jones had a limit closing in on 15 pounds with four “good” keepers and one that he’d love to cull, so watch out for the Oklahoma phenom this afternoon.

Eric Olliverson, who led on Day 1, was rocking and rolling this morning. Throwing a crankbait and a vibrating jig, he has a limit with two fish close to 4 pounds in the box. He was excited that the fish were set up how he wanted and was covering water looking for a few more good bites. When our crew left him around 11 o’clock he had pulled a buzzbait out and was covering shallow water in the backs of pockets looking for a kicker. With a good base in his livewell already, he could certainly put some pressure on the pros above him come weigh-in.

Kyle Minke started the day in fifth, but after weighing the biggest bag of the event yesterday – 23-9 – he is yet another pro to look out for. He put two 4-pounders in the boat early and then another keeper to go with it by 9 o’clock. Throwing a vibrating jig, Minke is around good quality fish, but too much wind can hinder his bite. Still, even with the breeze rolling today, if Minke can get three more big bites in the boat he could secure his first MLF win.

The rest of the top pros are catching fish, but just haven’t connected with the right size yet. With the weights as tight as they are and the big girls biting on Grand, you’ll absolutely want to check out the weigh-in starting at 3 p.m. CT to see if Newcomb can close it out or if someone else can take the crown.