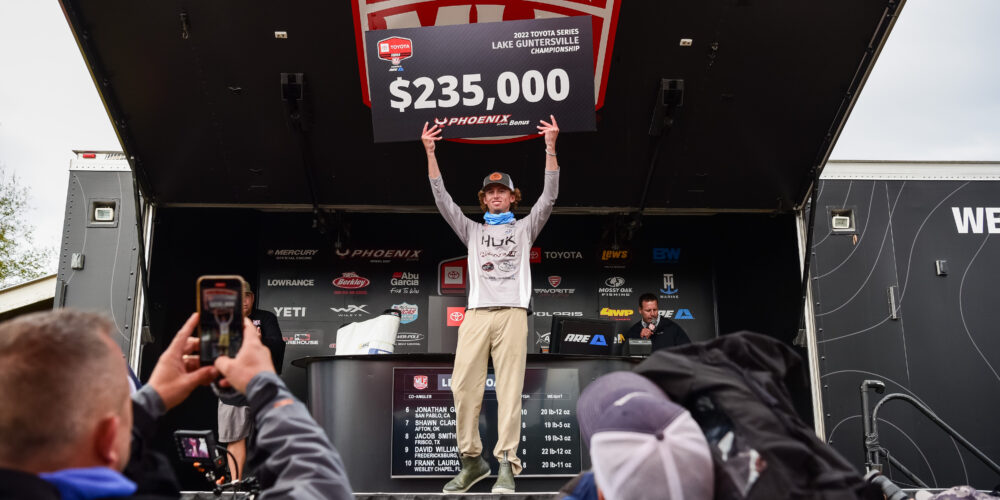 GUNTERSVILLE, Ala. – It’s a good year to be Kyle Hall. The young Texas pro locked up the Toyota Series Championship Presented by A.R.E. on Lake Guntersville on Saturday for his second pro-level win of the 2022 season. Hall caught a five-fish limit of 20 pounds, 8 ounces on Day 3 to push him ahead of second-place Marshall Robinson by 5-13. With a total of 59-1, Hall pocketed $237,500 for the win with all contingencies accounted for.

Hall came into Day 3 as the leader over Todd Castledine by just 5 ounces. With time winding down before he had to be back at Civitan Park in Guntersville for weigh-in, Hall had a limit, but knew it might not be enough to hold off a strong field. With only nine minutes left before the end of the day and one more cast left in the tank, Hall laid it all out on the line.

Hall wins with a duo of baits and electronics

Hall went with a one-two punch of a Shane’s Baits umbrella rig with 6th Sense Divine Swimbaits and a 1/4-ounce Damiki Vault blade bait. Hall was the only angler to come to the scales with two 20-pound bags this week, showing that his combo of baits and depth was truly the winning formula.

Hall now has three wins in his career including two in the 2022 season. The first was a narrow win on Lake Champlain this summer on the Tackle Warehouse Pro Circuit that was worth $137,500. With his Toyota Series Championship win this week, Hall pushed his total earnings on the season over $425,000.

The Garmin pro can LiveScope with the best of them, and he says he feels as though he’s at his best when he’s perfecting his fishing craft in tandem with his electronics.

“My Garmin electronics were huge for me in these wins this year,” Hall said. “When I can see them, I have a lot of fun doing it. It hurts my back a little bit doing it, but I’ll gladly deal with that if it means I can win.”

One of the perks of making the Toyota Series Championship is to fish the entire tournament, plus an additional event against the anglers from each specific division. Though the winner can’t take home a division bonus, the highest finisher from each of the other divisions can, which means that a few of the best-performing anglers went home extra happy.

The 2022 Toyota Series season is a wrap. The trail will return in January of 2023 when the season gets started on Sam Rayburn Reservoir for the first Southwestern Division event of the year.