Hawkins Ahead on Dardanelle 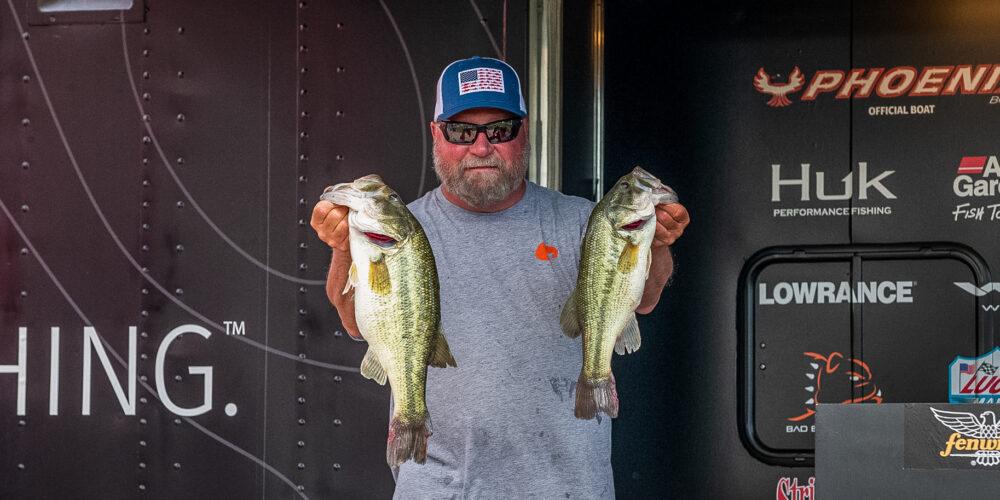 You can usually go quality or quantity. Lake Dardanelle didn’t give pros the quantity option today.

Of the 127 pros at the Toyota Series Presented by A.R.E. Plains Division finale, only 46 caught limits. Almost as many caught zero or one fish (32 pros). Thus, to make anything happen, a pro really had to focus on the quality, which is exactly what Chip Hawkins did.

The long-time local only got seven bites, but he turned them into 18 pounds, 5 ounces for a 2-pound lead on the rest of the field.

“I struggled all day long … only getting a bite every hour or so,” says Hawkins. “It was easy to get discouraged today. What helped was knowing what sized fish are in the areas I was fishing.”

While Hawkins says he had a banner practice, especially Wednesday, he figures the falling water and chocolate milk coloring “finally took its toll” on the fishing. The result was him only having three keepers around 11 a.m. Fortunately, one was a 6-2 kicker, which told him to keep hunkering down in the three key areas he had earmarked as having the right quality.

As for where those areas are, he says he was making a long run and getting in places most would never try to get a boat. Yet, in each of those areas he was rewarded.

“Just three spots; three little areas,” says the Little Rock, Ark. angler who considers this lake “partially home.” “I fished one and got three fish. Left to another and caught a couple. Left to the third and caught a couple. Just had to stay with it. I have a lot of experience on this lake, and it took all that knowledge to catch them today, I’ll tell you.”

Now the question becomes, can he do it again tomorrow?  Dardanelle is notorious for turning heroes into zeros from one day to the next, and Hawkins admits the falling water could make it almost impossible to get to his quality areas. Yet, for at least today, his quality plan worked out.

“It seemed like everything I caught was big today,” says Hawkins. “It was just one of them days.”

Angler of the Year Update

Andy Newcomb came into this event with little breathing room. Today, he added some.

Newcomb’s 12-13 bag has him sitting in 14th; 17 places ahead of Eric Olliverson, who was just 10 points behind starting the event. With TJ Martin stubbing his toe and bringing in only two fish today, more than likely, the Angler of the Year champion will be crowned tomorrow. It’s just a matter of if Newcomb can hold on one more day.

It was a last-minute decision for Michael Sharp. Based on today, it was the right one.

Despite never having fished Dardanelle prior, Sharp was hoping to get his season back on track by entering the Plains Division finale as a Strike King co-angler. So he called and tried to enter Monday. Tuesday, he got the green light that he was in. Today, he was one of only four co-anglers to catch a limit and is leading with 12-13.

With zero practice or knowledge, the Calera, Okla., angler opted to do what he knew best while fishing behind pro Greg Sapp – fish a weightless Texas-rigged Senko.

“You had to fish it painfully slow and really soak it,” says Sharp. “Fortunately, my pro was on a frog and flipping pattern that allowed me to do that. I caught a bunch of short fish, but I only got five keeper bites.”