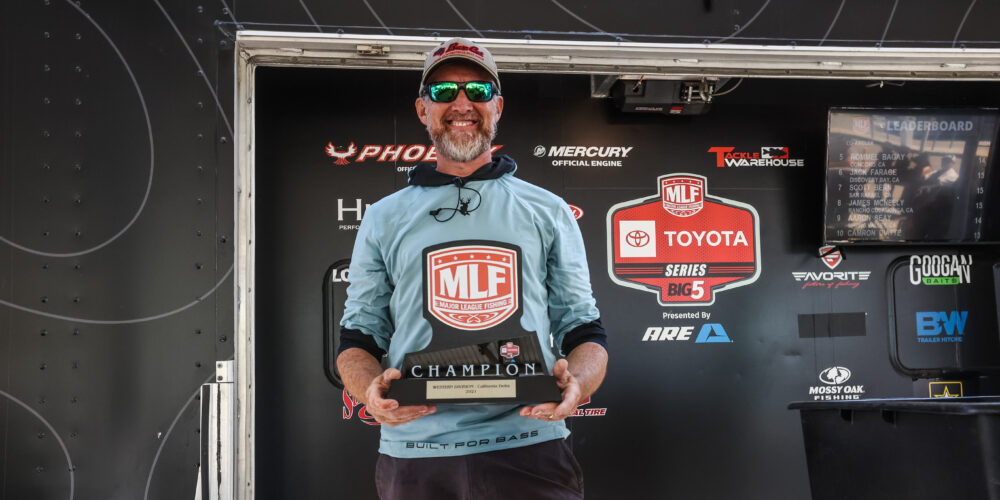 Bringing 12 pounds, 4 ounces to the stage on Day 3, Strike King co-angler Keith Hurney brought home the hardware in the Toyota Series Presented by A.R.E. Western Division event on the California Delta with a three-day tournament total of 37-12.

Hurney was in the hot seat all week, but he was finally able to breathe a sigh of relief in front of his hometown crowd when the scales closed.

With a stingy bite on his home water, Hurney believes his experience on the vast California Delta was a key factor in his wire-to-wire win.

“The big fish just weren’t chewing like they had been; it made for a tough tournament,” he says. “I think my experience helped, just knowing how the weeds were, and identifying some familiar banks. I was able to pick up some key fish there.”

Knowing the terrain may have been an advantage, but Hurney was still forced to adapt based upon his pro’s pattern and boat placement.

“I tried to alternate,” Hurney says of his approach. “If they started flipping a drop-shot, I’d start flipping deeper or pick up another bait. If they were throwing a ChatterBait in the front, I’d switch back to flipping. I was just trying not to target the same fish they were targeting.”

Keith wasn’t the only Hurney to bring home the top prize today as his son, Justin, took first in the Abu Garcia College Fishing Presented by YETI event, also held at Big Break Marina this morning. Justin’s younger brother will be competing tomorrow in the U.S. Army High School Fishing Presented by Favorite Fishing event at the same location for an opportunity to complete a Hurney hat trick.

“It’s already been a big week for the Hurney family,” Keith says. “This is amazing that we got to close it out and finish on top.”