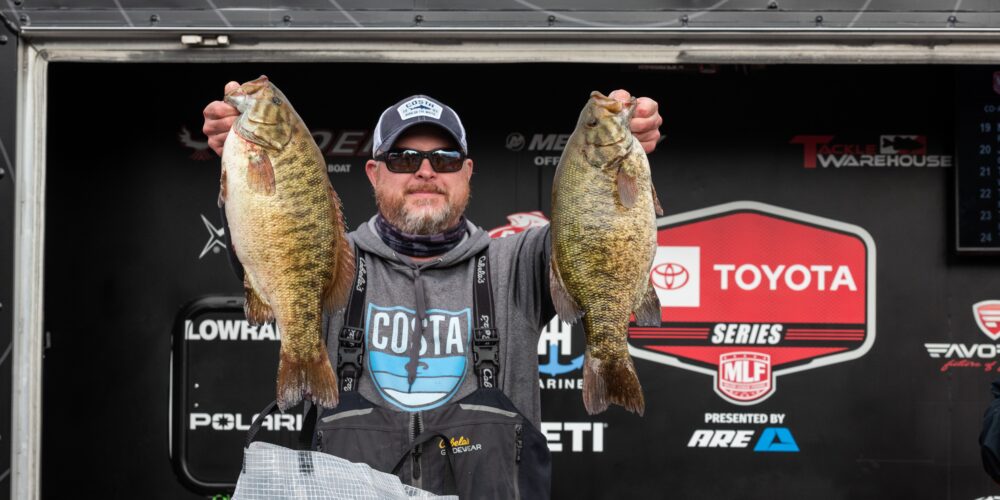 Little more than a month ago, the St. Lawrence River turned heads with the weights it pumped out during the Tackle Warehouse TITLE. Evidently, the fishery was just getting warmed up.

Day 1 of the Toyota Series Northern Division finale presented by BoatLogix was so impressive that it prompted people to start looking through the record books – the numbers are that astounding. Six bags over 23 pounds. Twenty-four bags over 20 pounds. Nineteen pounds was good enough for just 35th.

If this keeps up, the tournament is primed to break some records for total weight. And the scary part is, many think it’s only going to get better, including tournament leader Jason Kervin.

Normally, catching 23 pounds, 15 ounces would be a day to celebrate, and the Raymond, Maine, pro certainly was happy with the day he had. Having a bag with two 6-pounders is cause for celebration, but his bag also included a 14-inch dink – something he feels he can rectify tomorrow.

“I’m making a long run as far as you can go, and I had a short day today,” Kervin said. “I only caught four fish there and then caught my fifth fishing on the way back. Tomorrow, I’ll have the longer day, and if I can get five bites down there, I’ll have an even bigger bag. I don’t have any small fish where I’m going.”

What he does have, though, are some wary ones.

Kervin says he’s fishing a place “they want to be for some stupid reason that doesn’t make a whole lot of sense.” He has to relocate them every day, but they’re there. The problem is, if they hear his trolling motor, they spook off immediately.

First thing this morning, it wasn’t a problem as he was able to silently drift above them. However, storms rolled through midday with significant winds kicking up that made it impossible to fish his stuff.

“Once the wind picked up, I didn’t catch another fish,” Kervin said. “The wind direction was just bad and the fish I’m catching know you’re there. If they hear the trolling motor, they really take off running because there’s nothing holding them to anything.”

While there’s more wind in the forecast tomorrow, Kervin knows he can’t let off the gas with the significant number of big bags behind him. That means he has to go back down there to try to make it to Saturday.

“I’m committed to making that run,” Kervin said. “The winning fish are down there. It has all the potential in the world. It’s just really tricky to get them to bite.”