Mackinnon’s Sneaky Ditch Has Him Leading at Potomac River 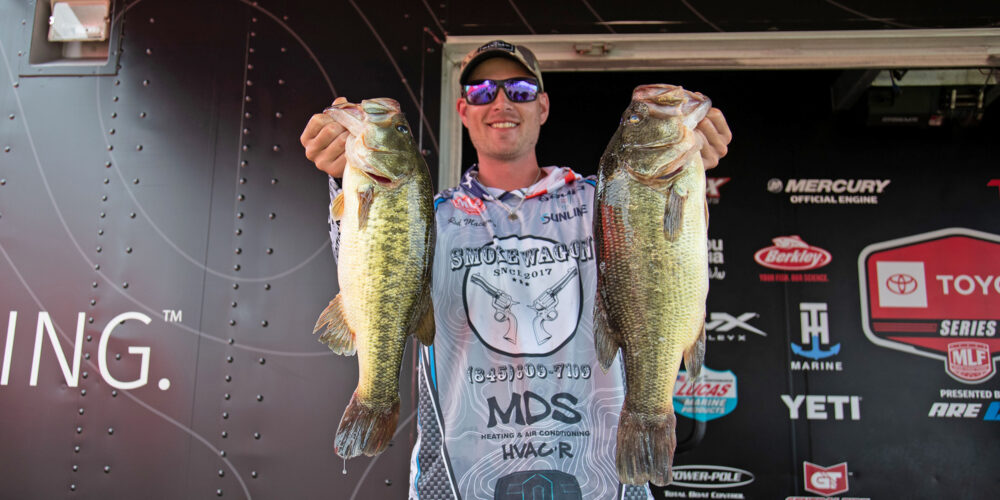 MARBURY, Md. – Prior to the start of the Toyota Series Presented by A.R.E. tournament on the Potomac River, local stick Bryan Schmitt said he didn’t feel anyone could have a sneaky spot to himself and have it hold up all three days. Rod Mackinnon III is out to prove him wrong.

While it hasn’t been the only place he’s hit, Mackinnon found something special while practicing for the first event on the Northern Division schedule. By 9:30 a.m. the New York pro caught 20 pounds, 7 ounces, from that spot; nearly half his 38-9 total.

And here’s the scary part about that spot: “Honestly, the spot hasn’t even gotten right the last two days,” Mackinnon said. “I need the tide to suck all the way out. In practice, I had to push pole to my spot, but the last two days I could idle to it. I think if the tide gets really low again, tomorrow could be pretty ridiculous.”

Mackinnon found the spot during practice on Tuesday while looking for places away from people – though, not for the typical reason.

“Being from New York, I hate fishing in crowds,” Mackinnon said.

While he was obviously tight-lipped about where the spot was, Mackinnon did say it was a ditch surrounded by super-shallow water and some vegetation. At higher tides, the fish hang in the vegetation, but as soon as the tide starts dropping, they all pull to the ditch, where he can pick them off with multiple offerings.

Mackinnon Was on ‘Em Early

Mackinnon’s first two casts today produced a 6-3 and 5-pounder, and he was up to 16 pounds by the time he boxed his fifth. He then culled up two more times with a 2 ¾-pounder and a 4-pounder before saying he had to stop and go fish somewhere else.

If only it was that easy the first day, as the high water and clouds meant that Mackinnon only caught two there before scrambling the rest of the day just to fill his limit. In all honesty, when he saw the forecast, he was “terrified” he was going to zero.

Saturday’s forecast has him on the complete opposite end of the spectrum, as the forecast is calling for low tides early, no wind and no clouds. In other words, perfect conditions for Mackinnon.

“I’m so excited, and fingers crossed tomorrow is the day,” Mackinnon said. “Schmitt said on record that no one could have something all to himself and win. I’ve done it two days. I need to do it three.”