Medlock Eyes Win No. 4 at Okeechobee 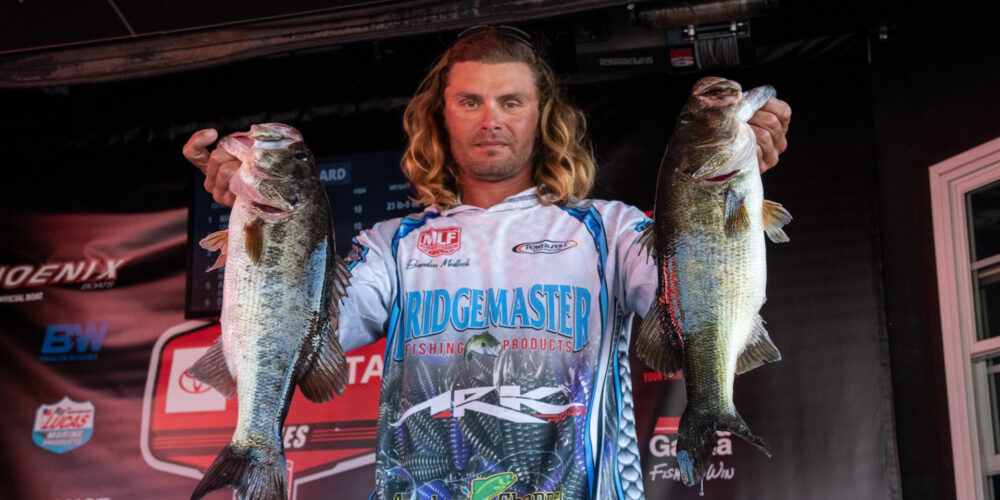 CLEWISTON, Fla. – In all the years of FLW and MLF making the trek down to Lake Okeechobee, the only angler to win multiple Toyota Series Presented by A.R.E. events there is Brandon Medlock. With the title belt handed around to folks like Glenn Browne, Bryan Thrift and Val Osinski, Medlock has won an astonishing three times, back in 2011 and 2012, and then in 2020. Now, after putting up 18 pounds, 5 ounces on Day 1 and 17-5 on Day 2, Medlock has totaled up 35-10 and clings to a 1-ounce lead over Lee Stalvey heading into the final day of the Southern Division event on the Big O.

Medlock hasn’t been doing anything crazy to catch his fish this week – just flipping a Medlock Double Guard Jig in areas with clean water where fish are moving up to spawn. He doesn’t even have one area in particular where he’s comfortable hunkering down, either, as evidenced by his need to cull out a 12-incher late in the day after making the run back down south toward weigh-in at Clewiston.

Still, even with Medlock running a similar pattern to just about everyone else this week, he finds himself in the lead with a chance to add a fourth Toyota Series victory at Okeechobee to his resume. Whatever he’s doing differently, he’s doing something right. And he has no reason to make a change on Championship Saturday.

“I don’t know if I’ll even catch a bass tomorrow, but I’m fishing on my home lake against 25 guys,” he said. “It’s awesome. All the cuts I’ve made [at Okeechobee], I just go out the last day and fish like I’m practicing.”

Though that’s a common platitude among tournament anglers, it’s especially true for Medlock. Almost all his Day 2 weight came from a new area he hadn’t fished yet – striking out at his best spot from yesterday – and his final 4-pounder of the day came from a quick-hit spot when he needed a late-day upgrade. He’ll start one of those places tomorrow, but Medlock expects to be making moves on the final day.

“I’m definitely going to start there (his best spot) tomorrow, but I’m going to run more new stuff,” he added. “It doesn’t change my mindset at all. It takes the pressure off because all the rest of the guys are gone and now I’m fishing a 25-boat tournament.”

Winning thrice before on Okeechobee doesn’t give Medlock as much confidence as it probably should, though, especially given the tough fishing conditions this week.

“The areas are way tougher than they should be for the weather we’ve had,” Medlock said. “Three weeks ago, we were catching them like fire. I really don’t know why it’s not better now, but they don’t seem to be moving up in large numbers for me.”

Even so, they seem to be moving up well enough to give Medlock the lead with a very consistent first two days. One more and he might be adding another Okeechobee trophy to his mantle.

Weighing in 15 pounds on Day 2, Lenexa, Kansas co-angler Mason Chapman pulled ahead of the field to carry a 1-pound, 9-ounce lead into Championship Saturday.

The son of Bass Pro Tour pro Brent Chapman, it looks like Mason has got plenty of fish-catching genes. Chapman decided this year that he wanted to venture away from home to get to know Florida’s famed bass fisheries by fishing the Toyota Series and Phoenix Bass Fishing League, and he’s off to a good start so far.

“It was a special day today with all the bites I landed,” he said. “I fished really clean, which I feel was really important, and overall had a great day on the water.”

Most of those bites came before 9:30 and after a slow start. Essentially, he caught all his fish in about 20 minutes after the water temperature in his area hit 65 degrees. At that point, it was all about covering water and filling the livewell in a hurry.

Covering water for Chapman meant throwing a swim jig in clear water near eelgrass, though his fifth and biggest fish came on a spinnerbait rolled just above the top of the grass.

As for tomorrow, Chapman said he just wants a draw that will allow him to do more of the same thing that got him to this point.

“I hope I don’t get someone doing something completely off the wall,” he admitted. “Any draw I get up shallow around grass I feel like I’ll be able to do what I need to do to catch another good bag tomorrow.”