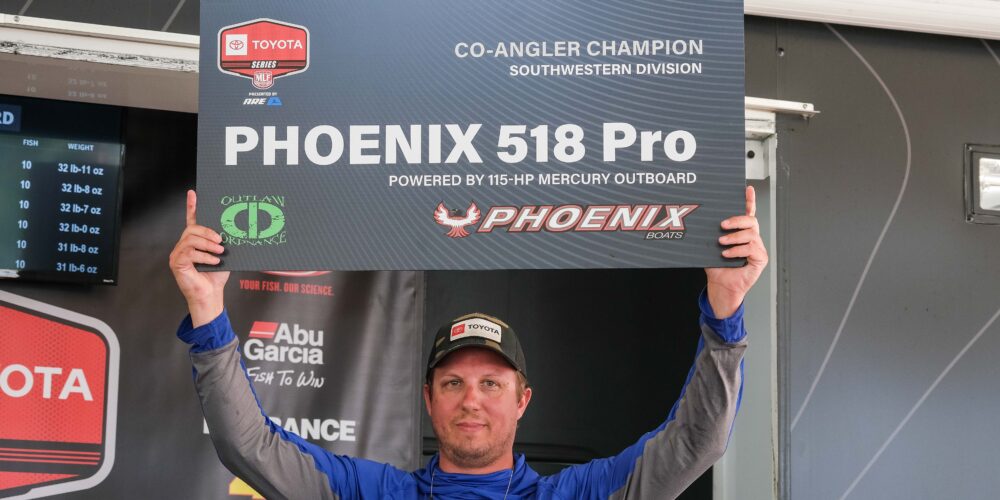 “It feels great to finally win a boat,” Moore said after sacking up 41 pounds, 6 ounces to win the Toyota Series Presented by A.R.E. Southwestern Division Presented by Outlaw Ordinance on Sam Rayburn. “This is the fourth time where I had a legitimate opportunity to win a boat, and two of them I blew it for myself. I had the winning bites and messed them up. The other time I had a shot, but it didn’t happen. Those other two times hurt, though. So, this feels great.”

Of course, it’s kind of remarkable how he even got in position to win.

The first two days of fishing, his pro’s boat experienced engine troubles. On Day 1 it was Mike Holland and Day 2 it was Cal Cameron. Thus, he never left far from takeoff.

Fortunately, he was doing something a little different than most with a red bug Zoom Ol’ Monster that helped keep him in contention.

“I’m kinda weird with my worm,” Moore said. “I fish it like you would for speckled trout. I let it hit bottom, give it one jump, let it hit bottom again and give it two jumps. A lot of guys just drag it, but I hop mine.”

That trick didn’t stop on the final day while fishing with Keith Combs. While Combs struggled in his attempts to catch kickers, Moore stayed behind him all day and figures he caught 15-16 keepers on that worm.

Securing the win and finally claiming a boat means the world to Moore. After weigh-in yesterday, he was nervous about being in the lead, and now, he can breathe easy.

“Yesterday, I didn’t want to be leading. Today is the day it counts.”