Nordbye Squeaks Ahead on Day 2 at Chickamauga 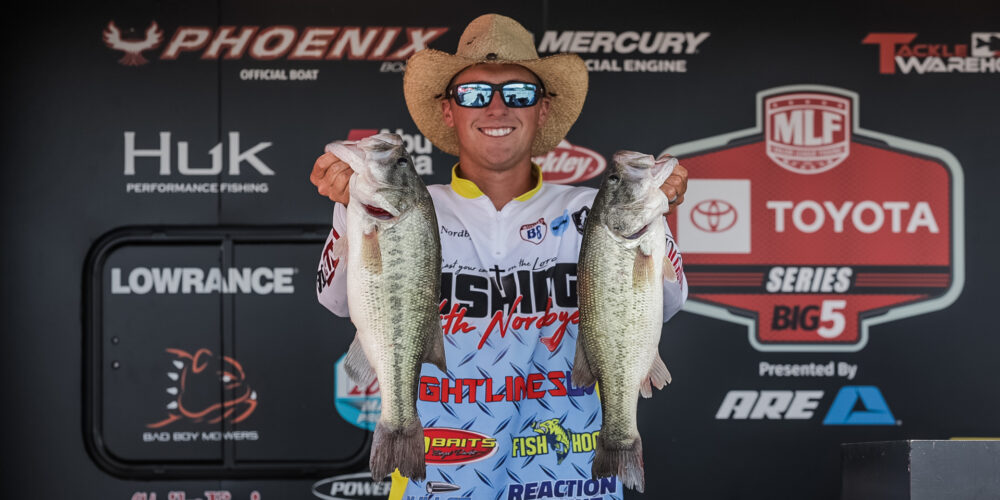 Putting 18 pounds, 7 ounces on the scale to back up 18-12 caught the first day, Andrew Nordbye moved into the lead of the Toyota Series Presented by A.R.E. Central Division event on Lake Chickamauga. With a total of 37-3, Nordbye is just 2 ounces ahead of Jordan Hartman, who brought in 17-1 on Day 2 to drop one spot in the standings.

Having fished more than 30 events with MLF between college and the minors in his young career, Nordbye has made just one Top 10 – back in 2015 in a college event on Kentucky Lake. Now, the young Guntersville, Ala., angler is in the Top 10 in the Central Division finale and poised to win his first event.

The steadiest of any of the pros in the Top 10 by far, Nordbye has parlayed two solid days on a tough Chickamauga into the lead.

“I’m fishing pretty simple,” says Nordbye. “It’s one of the ways I grew up learning to tournament fish. It’s one of my favorite ways, just a shaky head in brush. I’m just jigging it out of the brush – I watch about half of them eat it on LiveScope. It’s amazing, you just twitch it out of there, and jiggle it, and then your line jumps.”

Targeting mostly brush in 8 to 15 feet of water, Nordbye has caught double-digit keepers each day.

“I’m panning around looking for little brush and whatever else is on the bottom and just casting to it,” says Nordbye. “I’ve got abut 15 different areas, but I’ve mainly caught them out of three. I’ve got about eight deep ledge schools, but they were all covered up today. I tried to hit ‘em, but I couldn’t. The fish are moving out, as a lot of these guys have seen, they’re not loaded up on the main river yet. They’re in-between, and that’s where I found them.”

Going out in the lead for Day 3, Nordbye is just one day away from a tremendous win.

“I’m super excited for tomorrow,” says Nordbye. “I’ve got my main stuff all to myself, so I feel confident I can go in there and catch a limit. I just pray the Lord blesses me with some big bites like he has today and yesterday.”

Washam Wins Angler of the Year in a Nail-Biter

Finishing 37th, Jimmy Washam closed down a win in the Angler of the Year race by just one point. Both Washam and Steve Lopez sputtered at the end, but Chase Henley kept it dramatic, finishing 18th in the event to nearly snatch AOY from Washam. In fact, Washam won with 741 points, just one more point than Henley’s total of 740 points.

Taylor Pulls Ahead on the Strike King Co-Angler Side

A former Toyota Series champion on the pro side, Sieg Taylor weighed the biggest bag of the tournament to jump ahead on the co-angler side. Catching only two on Day 1, Taylor walloped 22-8 on Day 2 to climb into the lead with a 26-12 total.

Taylor says a lipless crankbait accounted for his weight today and that he was done by 8:30 a.m., which is quite a feat when you consider how tough the lake has been fishing. Tomorrow, Taylor will be fishing the final day for the first time since 2005, when Taylor won the Western Division event on Clear Lake with a four-day total of 94-11.