Reynolds Comes from Behind for Grand Lake Win 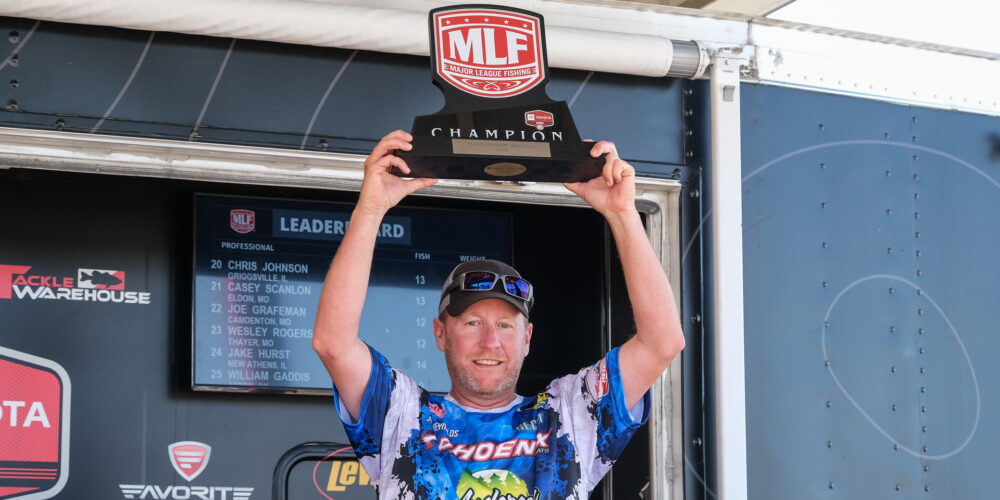 GROVE, Okla. – A few weeks ago at Lake Texoma, wind shortened the Toyota Series Presented by A.R.E. Southwestern Division event to just one day and Jeff Reynolds walked away as the bridesmaid. Given three days in the Plains Division event at Grand Lake, the seasoned pro caught the biggest bag on the final day to move from sixth to first for his second Toyota Series win. Weighing 18 pounds, 3 ounces on Day 3, Reynolds totaled 54-2 to win and earned $76,500 for his efforts. He needed every fish to top Cade Alsbury (53-7) and Kyle Schutta (52-15).

Reynolds’ Championship Saturday got off to a less than glorious start, and the Calera, Oklahoma pro was staring down the barrel of an empty livewell at 10:30 a.m. Instead of standing there scratching his head, he decided it was time to put it down and go fishing.

“I had not a thought of winning the tournament this morning,” Reynolds said. “When you’re out of fish you just put your trolling motor down and go. I wasn’t thinking I was going to win, but I wanted to give myself a chance. I didn’t want to spend a bunch of time on 2-pounders. I just kept looking and the Good Lord blessed me. I just ran across the right ones.”

Reynolds found all of his fish on beds this week, spotting them behind the numerous boat docks and marinas on Grand Lake. Most of his notable bites came midway up sizeable creeks, with bass positioning themselves in small pockets. Finding them was often the most difficult part.

“I caught every fish sight fishing this week, it’s my favorite thing to do,” Reynolds said. “It’s hard to look on this lake, there’s so many docks, and a lot of the fish will be behind the dock. You spend so much time going around, it’s hard to cover a lot of water.”

Targeting fish he found in practice, Reynolds weighed the second largest bag of the tournament on Day 1. The script changed, however, when his spots ran dry the second morning. He proved his ability to find fish again on the final day, weighing in the biggest bag of Day 3.

“The first day I had most of them by 11,” he said. “On Day 2 it was an all-day grind. I caught my last one right before I came to weigh in. Today I caught a 4 ½-pounder with probably 30 minutes left to go. I lost her once this morning, and went back and caught her right there at the end.”

Once he found the right bass, Reynolds put a Texas-rigged Strike King Game Hawg and Reaction Innovations Sweet Beaver to work, rigging both on a 3/0 Trokar hook with a tungsten weight.

Both baits came in clutch, and paired with sharp eyes and veteran savvy, Reynolds now has a championship trophy riding shotgun.

“It’s been a great week, God has really blessed me,” Reynolds said. “I never dreamed that this was going to happen, even coming into today. I’m still in shock. It hasn’t even hit me yet.”