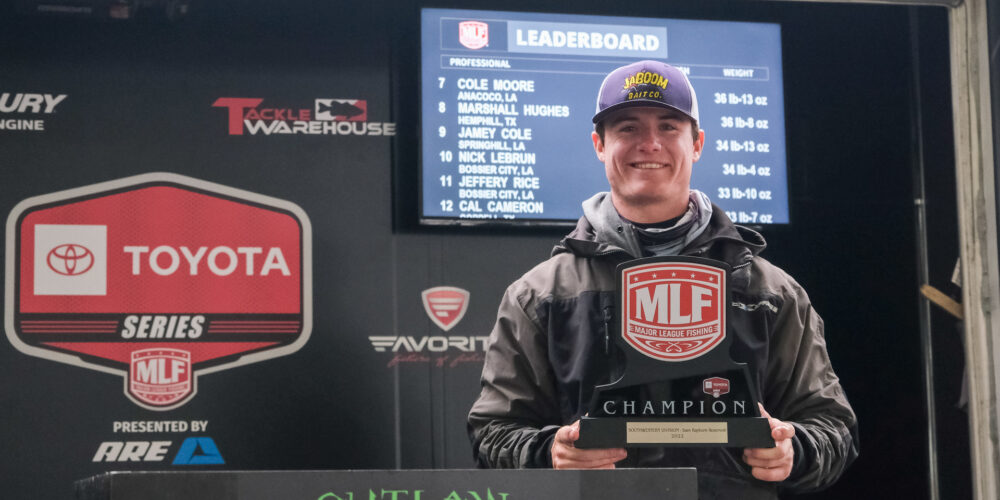 Fishing his first Toyota Series Presented by A.R.E. event ever, 17-year-old Levi Thibodaux is now a proud owner of the Strike King Co-Angler title, having amassed a three-day total of 35 pounds and 8 ounces in the Southwestern Division Presented by Outlaw Ordnance event on Sam Rayburn. In addition to the trophy, Thibodaux takes home a new Phoenix boat package and $1,750 in cash.

Every day, the young Louisiana angler found himself fishing new water and having to make a new adjustment to bag consistent limits.

“The first day the fish were kind of spread out on top of the flats, so we used a lot of moving baits. I caught them on a crankbait and some stuff like that,” he said regarding his Day 1 effort of 13-4.

Thibodaux also noted he lost a trio of important fish on Day 1 that could have cost him the title.

“I jumped off two 4s and one close to 7 pounds right at the boat. I’ve never missed that many big fish in one day.”

“The second day was a little slower, and I caught them on that Neko rig up shallow,” Thibodaux said, bringing in a five-bass limit of 11-7.

Thibodaux made further adjustments on the final day, knowing that the changing weather would likely make things difficult on the Top 25. This time he utilized a Carolina Rig, knowing he had his work cut out for him behind pro division leader and fellow first-time Toyota Series competitor Glen Webb.

“Today, it was a grind, but I was able to scrap up five bites on a Carolina Rig,” Thibodaux said, noting that it’s not a technique he’s had much, if any, experience with. “It was a big learning experience; I learned a lot.”

Thibodaux was truly fishing by the seat of his pants the entire week. He went into the event with zero practice having entered on a whim when another angler needed someone to split lodging with.

That whim became a win, and an important one for the young angler, who has been fishing tournaments in his home area since he was 11. The Phoenix boat will serve him well this upcoming fall where he is set to attend Louisiana State University – Shreveport on a bass fishing scholarship.

“I was nervous, I thought I had it, but I was worried about [Duane McDaniel]. I saw [his bag] at the tank and saw that big head pop up and I went ‘Woah,” said Thibodaux. “But once he weighed, I figured I had it.”