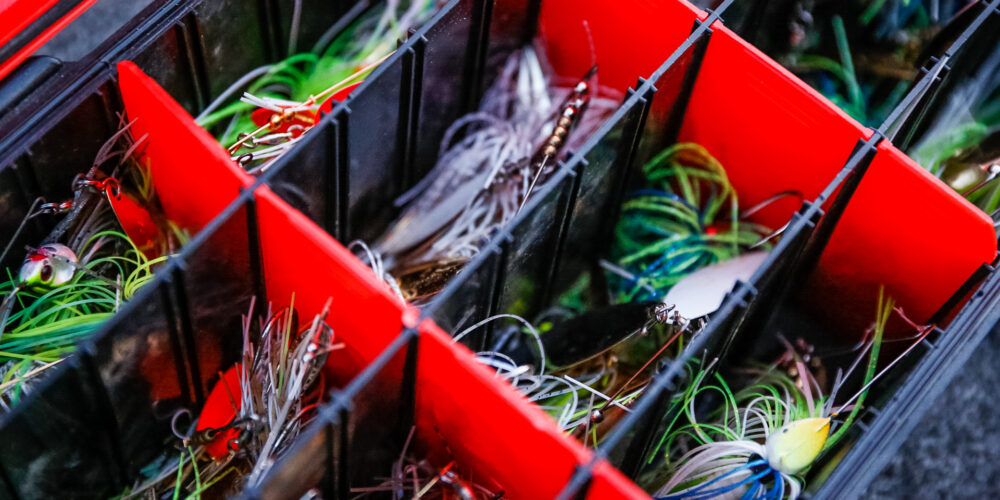 At Dale Hollow, as with many fisheries in the country, springtime bass fishing tends to center on a few staple baits. Even with high water and a wicked cold front, spinnerbaits, flipping setups and jerkbaits did some heavy lifting in the second event of the Toyota Series presented by A.R.E. Central Division season.

Here’s a full rundown of the top baits that got the job done for the top 10 Central Division presented by Neat Companies anglers on the famed Cumberland River reservoir.

1. Adam Wagner flipped his way to the win with a Big Bite Baits Craw Tube (watermelon red) on a 5/0 Gamakatsu SuperLine hook weighted with 1/2-ounce tungsten. He fished that setup on a 7-foot, 6-inch flipping stick paired with a Shimano Curado reel and 25-pound-test Berkley Trilene 100% Fluorocarbon line.

2. To catch his fish throughout the week, Brandon Cline relied on three baits: a 1/2-ounce black and blue flipping jig with a black and blue craw trailer, a white-and-chartreuse spinnerbait and a SPRO RkCrawler that he fished to about 14 feet.

3. On Day 1, Bryan Thrift relied on his soon-to-be-released signature “Big Blade” ChatterBait from Z-Man on a 7-foot, 3-inch heavy-power Fitzgerald Stunner rod and Abu Garcia Revo STX (7.3:1 gear ratio) spooled with 12-pound-test P-Line Tactical Fluorocarbon. Thereafter, he caught most of his fish on a shaky head tipped with a 5-inch Damiki Stinger rigged on the same line and reel, which was paired with a 7-foot, 3-inch medium-heavy Fitzgerald Stunner rod.

5. Robert Reagan’s go-to bait on his shaky head was a Zoom Trick Worm in June bug. For flipping, he relied on a 1/2-ounce black-and-blue jig of his own making paired with a Strike King Rage Tail Craw trailer (Okeechobee craw). He used G. Loomis rods for both tactics.

6. Derek Remitz caught a ton of smallmouth throughout the week, mostly on a hand-painted deep-diving SPRO RkCrawler and a Storm Wiggle Wart. Other than a shaky head, he did the rest of his damage on a Megabass Vision 110 jerkbait, which he fished on 10-pound-test line to keep his bait in the 8 to 10 feet range.

8. Derik Hudson relied on just one bait for his flipping setup: a Bizz Baits Sassy Stick (green pumpkin), which he threaded on a 5/0 Gamakatsu SuperLine hook on 15-pound-test Seaguar AbrazX before upsizing to an Owner 4X Jungle Flippin’ Hook flipping hook on 20-pound-test AbrazX on Day 2. He weighted his setup with a 1/2-ounce Strike King tungsten weight and spooled everything on a Shimano SLX DC reel.

9. Every fish Chase Henley caught throughout the tournament came on a Megabass Vision 110+1 in the western clown color, which he tied to 12-pound-test Sunline fluorocarbon spooled on a Shimano SLX XT (7.2:1 gear ratio). He paired that reel with a 6-foot, 8-inch Dixie Custom medium-power rod.

10. Steve Lopez loaded his Alabama rig with 3.3-inch Keitech Swing Impact FATs initially before upsizing to 3.8s and switching to a whiter color, which seemed to do the trick. He tied it to 20-pound-test P-Line Tactical Fluorocarbon and launched the rig on a 7-foot, 10-inch heavy Duckett Black Ice Series rod and Lew’s Custom Lite SLP reel.