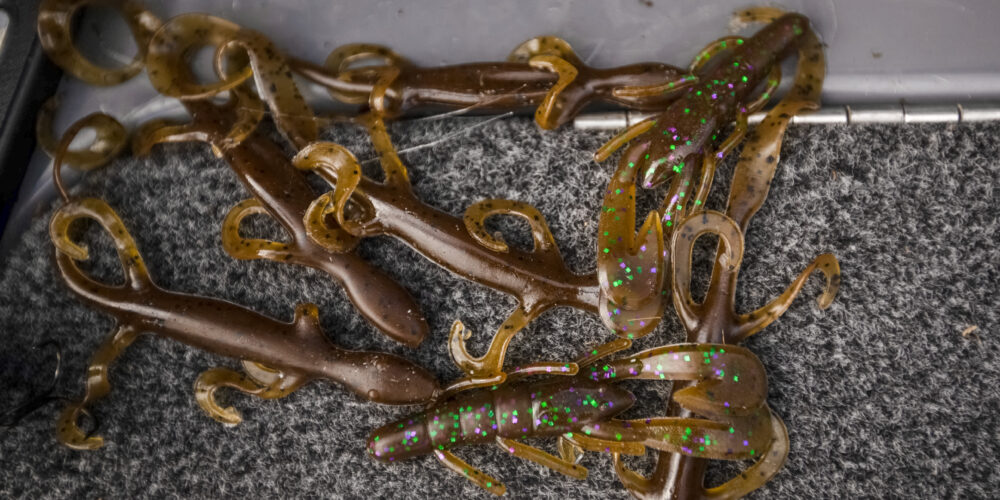 PLATTSBURGH, N.Y. – The fishing in the Toyota Series Presented by A.R.E. event on Lake Champlain didn’t surprise anyone, with drop-shots targeting smallmouth being the primary player with a few other Champlain staples worked into the mix. Some of the trending patterns were undoubtedly set by the Tackle Warehouse Pro Circuit Presented by Fuel Me event just last week, but the summertime recipe for northern events generally isn’t too complex. Finding the correct quantity and quality of fish is the real trick.

1. For the win, Bryan Labelle relied on his trusty ½-ounce Dirty Jigs Scott Canterbury Flippin’ Jig, plus a drop-shot with either a Berkley PowerBait MaxScent Flatnose Minnow in white or a perch-colored Jackall Crosstail Shad.

3. Leaning on his LiveScope, Spencer Shuffield drew fish up from shallow grass with a Yo-Zuri 3DB Jerkbait SP Deep 110 in ghost sexy shad and then caught them with a Ned rig with a Z-Man Finesse TRD in green pumpkin goby. For deeper smallies, he went with a drop-shot tipped with either a Berkley PowerBait MaxScent Flat Worm or a Berkley PowerBait MaxScent Flatnose Minnow.

5. Falling from first with a tougher final day, Wayne Vaughan fished flats and deeper stuff, catching fish on a variety of baits. His best bait was probably a Carolina rig, for which he used either a Zoom Lizard or a Zoom UltraVibe Speed Craw. In addition to the C-rig, Vaughan plied a drop-shot with a Berkley PowerBait MaxScent Flat Worm or a Z-Man Scented Jerk ShadZ, as well as a Heddon Super Spook in a baby bass color with an orange belly.

6. The primary bait for Joseph Thompson was a simple green-colored Berkley PowerBait MaxScent Flat Worm on a drop-shot.

7. The pioneer of the suspended smallmouth game on Champlain, Stephen Estes knocked down another Top 10 on the pond with a Hawg Pours Hawg Teaser in Champlain special on a drop-shot with a ½-ounce Eco Pro Tungsten weight.

8. Ron Nelson “caught them on everything” this week. His best producer was a heavy Carolina rig that he fished fast on the bottom, mostly using a Zoom Baby Brush Hog. Additionally, he tossed a drop-shot when chasing deep fish, which he mostly rigged with a Strike King 3X ElazTech Baby Z-Too.

9. Making his first Top 10 from the front of the boat in the Toyota Series, Idaho pro Kyle Gelles walloped the smallmouth with a 3-inch Dry Creek Outfitters Zinger on a drop-shot.

10. Colby Miller wrapped up 10th with the extremely popular combo of a Strike King 3X ElazTech Baby Z-Too on a drop-shot.