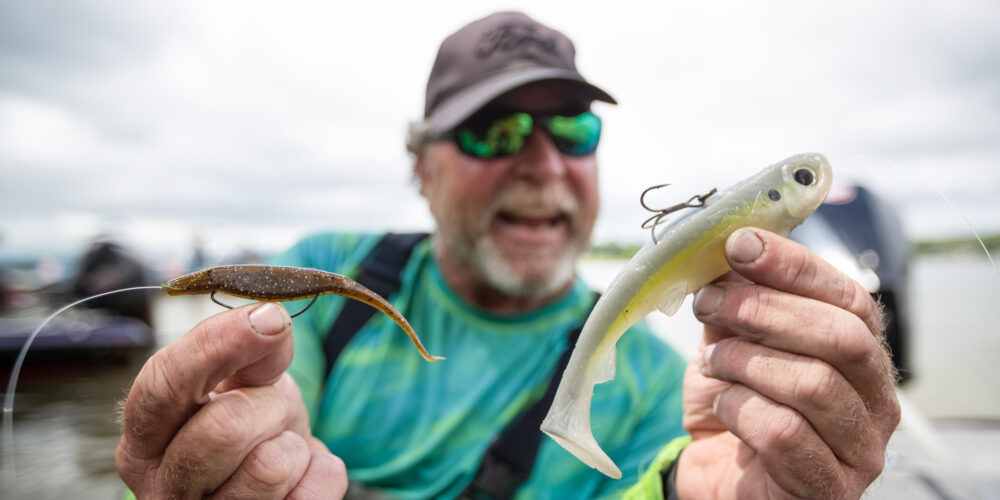 CHATTANOOGA, Tenn. – The Toyota Series Presented by A.R.E. Central Division event on Lake Chickamauga featured a mix of fishing techniques and lures as bass were scattered between prespawn and postspawn. But true to form for Chickamauga, lots of big bass were caught, including two fish over the 9-pound mark.

Most pros were fishing shallow for spawning fish, sometimes sight fishing but often just casting at random in spawning areas. As one angler put it, “I was fishing shallower than shallow.” Wacky rigs were often the name of the game, but there were plenty of other baits mixed in.

Here’s what worked best on Chickamauga.

1. Matt Stanley fished a variety of baits through the tournament, including a ¾-ounce Picasso Inviz R Wire Double Willow Spinnerbait with a 6-inch Culprit Skinny Jerk trailer. That was his normal go-to lure on an early morning shad spawn bite, but on the final day, he couldn’t get bit so he switched over to a Megabass Vision 110 (Mat shad) and caught all his keepers, including a 9-pounder that moved him from 13th place to the win.

2. Kevin Meunier was consistent throughout the tournament, depending on a weedless Freedom Tackle FT Structure Jig with a Gambler Flappy Daddy trailer. He mixed it up a little on the early morning bite, but most of the time he was fishing shallow for bedding fish using a natural color pattern.

“Just getting it in their bed, they can’t stand it,” he said. “It’s got rattles on it and a little BaitFuel on it and it gets it done.”

3. As many anglers do, Tommy Brown paid a visit to Dayton Boat Dock during the Toyota Series practice days. He spotted a big swimbait that caught his eye. “I looked at it and thought, ‘They’ll eat that,’ so I grabbed it.” After the tournament, he couldn’t even remember what it was. Fortunately, Elijah Kirk at Dayton Boat Dock checked out the photo and knew instantly it was a 6.75-inch 3:16 Bait Company Rising Son in the top hook line thru version.

4. Andrew Nordbye was fishing shallow like most folks with worms and Ned rigs, but his biggest bass on the final day bit a 6th Sense Cloud 9 C25 crankbait in the blue-treuse shad color. He said the final day was the only day there was a little current that helped set up a deep ledge bite.

6. Kevin Drake said he relied most on 5-inch Berkley PowerBait MaxScent The General, cinnamon purple in color. Drake said on Chickamauga soft plastics do well, especially in “brownish” colors. Drake rigged it as a Neko rig, a variation of a wacky rig that uses a nail weight inserted into just one end of the worm.

“It gives it a little more action and it sinks a little bit faster,” said Drake. “I wasn’t fishing dirt-shallow so I think that nail weight and a little faster rate of fall helped me a lot.”

7. Clay Reece was depending primarily on 5-inch Yamamoto Senko rigged wacky style. “The first day I caught them on green pumpkin until I ran out,” said Reece. “They didn’t have them at the tackle shop so I just got one that looked green pumpkinish, but I don’t even know what color it was.”

8. Michael Black says he fishes three lures – jigs, jigs and jigs. But he’s not fishing a name brand. “It’s actually homemade,” he said. “A friend, Pat O’Dell in Illinois, makes them for me. It’s just something I have a lot of faith in.”  Black preferred a 7/16-ounce jig with green and orange as his go-to color combo.

9. Carl Gillespie said he relied on Bass Pro Shops Stik-O Worm. He rigged his worms two different ways, one was standard wacky style. The other he rigged Neko style, with a nail weight in the end, but rather than hooking the worm in the middle he placed the hook on the opposite end of the worm from the nail weight.

“The bait actually goes backward,” he explained. “You skip it to the edge of the weeds or a dock and it will actually just dive back underneath the dock or tuck right underneath the grass.”

Morning dawn and bluegill were his favorite colors.

10. After boating his first fish, Casey Martin found dead shad in his livewell that he said were about 3 ½-inches long. He felt like the bass were definitely keyed in on shad which meant he was fishing a lot of white. His preferred bait was the 3/8-ounce Z-Man/Evergreen ChatterBait Jack Hammer with a Z-Man RaZor ShadZ trailer. His secondary bait was a 3/8-ounce Picasso Swim Jig featuring a blade added with “a little redneck engineering” and a white craw trailer.