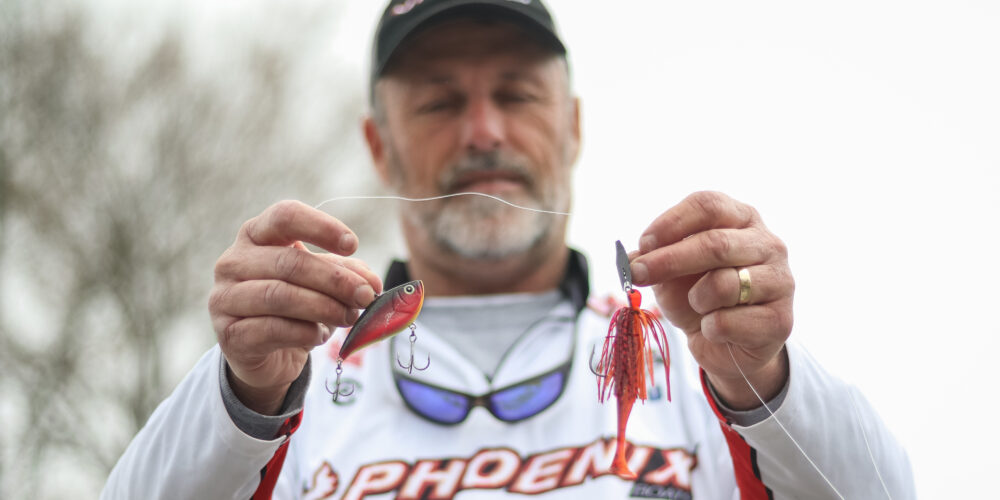 Per usual, a lipless crankbait and vibrating jig were the deal on Guntersville.
February 28, 2022 • Justin Onslow, Christian Caldwell • Toyota Series

While smallmouth from Wheeler Lake below the Guntersville Dam looked like the pattern to beat after two days of competition in the Toyota Series Presented by A.R.E. Central Division opener on Lake Guntersville, massive outflows above Wheeler put a monkey wrench in Nathan Brewer’s plans and left the door open for Kent Ware to surpass him for the $80,000 victory on Championship Thursday.

Brewer’s program was certainly an oddity compared to most of his 327 competitors, many of whom stuck with tried-and-true Guntersville staples: ChatterBaits and lipless cranks fished around grass. Nearly every angler in the Top 10 employed some combination of baits that included the hard-vibrating offerings, mostly in crawfish patterns.

Massive rains and ever-changing weather conditions kept anglers on their toes, but traps and ChatterBaits kept them grounded and led the way to a lot of top finishes.

Here’s a look at the Top 10 pros and what they used to catch their tournament-leading fish at Guntersville.

1. One bait did all the heavy lifting for Kent Ware, who made the short trek back home to Guntersville $80,000 richer. To catch his 59-15, Ware relied solely on a 1/2-ounce Bill Lewis Rat-L-Trap tied to 17-pound-test fluorocarbon spooled on a Lew’s reel and a G. Loomis rod.

2. It was a three-pronged attack from Casey Martin to lock up his runner-up finish. Martin employed a 1/2-ounce Bill Lewis Rat-L-Trap on 16-pound-test Sunline fluorocarbon and a Duckett Micro Magic rod (7-foot medium-heavy), a 3/8-ounce Z-Man/Evergreen ChatterBait Jack Hammer with a Castaic Jerky J trailer on a 7-foot, 1-inch medium Duckett Pro Series rod and a Z-Man Leap FrogZ thrown on 65-pound-test PowerPro braid with a 7-foot heavy rod.

3. While Derik Hudson caught a few fish on an umbrella rig and a wacky-rigged stick bait skipped under docks, he caught 90 percent of his fish on a discontinued XCalibur XR50 lipless crankbait (5/8-ounce). He tied that to 17-pound-test Seaguar Tatsu fluorocarbon spooled on a Shimano SLX DC reel paired with a STIX Fishing No. 4 Reaction Stik (7-foot, 6-inch, medium-heavy, moderate-fast).

4. To keep his fish on their toes, Bo Collins threw a little bit of everything at them. He used a pair of Z-Man/Evergreen ChatterBait Jack Hammers (3/8- and 1/2-ounce) with a 4-inch Keitech Easy Shiner trailer and four different lipless crankbaits (“to keep them biting”) in various sizes: a 1/4-ounce BOOYAH One Knocker, 1/4-ounce Berkley Warpig, 1/2-ounce Bill Lewis Rat-L-Trap and 1/2-ounce Azuma Shaker Z, all in various craw colors. He mostly stuck with 16-pound-test Sunline fluorocarbon, Lew’s reels and 7-foot, 6-inch medium-heavy Duckett rods for the task.

5. Nathan Brewer stuck with just a few baits to tally 51 pounds, 13 ounces of smallmouth in the Guntersville tailrace over the first two days. High, turbulent water quashed his plans on Day 3, but his 5-inch Zoom Swimmer swimbait on various heads (1/2-ounce, 3/4-ounce and 1-ounce) certainly did its job on Tuesday and Wednesday. Brewer tied those heads to 17-pound-test fluorocarbon spooled on a Shimano Bantam reel and custom-made 7-foot, 3-inch heavy Grassy Custom rods.

7. Shawn Penn broke out the new Andy Morgan-designed Strike King Chick Magnet (with custom paint jobs) to do most of his damage. He fished those on 14-pound-test fluorocarbon on Lew’s reels and Lew’s KVD rods. Penn also caught some fish on a 1/2-ounce Strike King Thunder Cricket with a Zoom Z Craw trailer and a BOOYAH One Knocker lipless crankbait.

9. While Miles Burghoff used multiple rods to notch his ninth-place finish, they all had the same thing tied on: a Z-Man/Evergreen ChatterBait Jack Hammer (Hite’s hot craw) in 3/8 and 1/2 ounces. He paired those with a matching Z-Man Razor Shadz trailer and fished the whole package on 20-pound-test Seaguar Tatsu spooled on Fitzgerald VLD10 reels (7.2:1 gear ratio) and 7-foot, 3-inch Fitzgerald Vursa rods.

10. Andrew Loberg fished grass lines all week, leaning heavily on a 1/2-ounce BOOYAH One Knocker in sunset craw using 20-pound-test Sunline fluorocarbon. His reel of choice was a Daiwa Tatula, which he attached to a Powell 755CB rod.