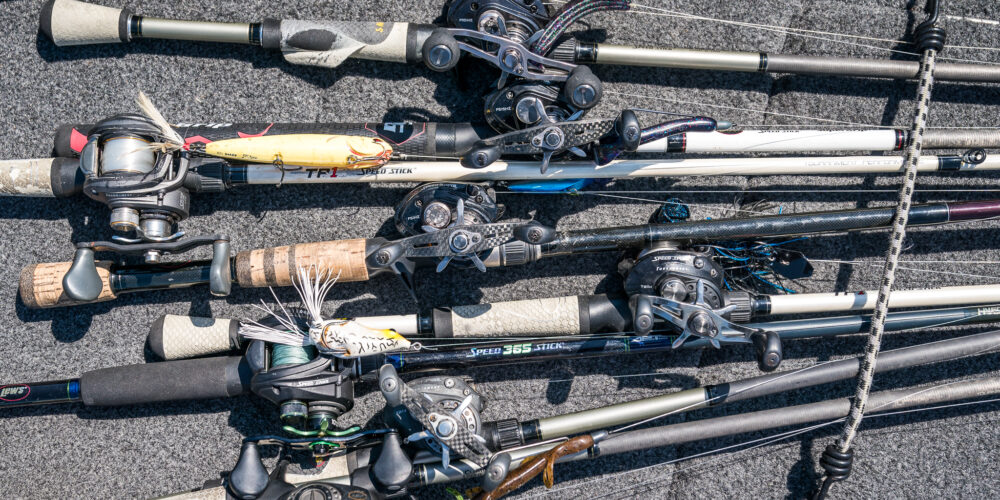 With dirtier water than usual on Lake Seminole and the bite being a bit stingy because of it, the top pros kept it simple, mostly reaching for Seminole staples to get the job done in the Toyota Series Presented by A.R.E. Southern Division finale.

From vibrating jigs to Texas rigs, here’s a look at the top producing baits that helped the cream of the crop outlast the field.

1. Nick Thliveros won his second Toyota Series event by taking a page from his dad’s (Peter T) playbook. Dragging either a Strike King Cut-R Worm (green pumpkin with the tail dipped in chartreuse dye) or a Strike King Anaconda (junebug red) worm rigged on a 3/16- or ¼-ounce Bullet Weights Tactical Tungsten weight, Thliveros milked a 50-yard area in Spring Creek for the entirety of the event.

2. Local hammer Matt Baty did most of his work over the first two days with a Berkley Dredger 14.5 (big money) cranked around current breaks near shoreline grass. On the final day, Baty tossed a Z-Man Project Z ChatterBait with a 3.5-inch Berkley PowerBait The Deal trailer around grass where a shad spawn was occurring.

3. Clint Brown, another Seminole hammer, tried his best to secure another win throwing a variety of ½-ounce Z-Man/Evergreen ChatterBait Jack Hammers with Bruiser Baits Slimmer Swimmers as trailers around clumps of coontail in Spring Creek.

4. Making his first Top 10 in his first MLF event ever, Braxton Clements ran a similar program to Thliveros by pitching a Texas rig with a ¼-ounce weight and a Zoom Ol’ Monster (junebug) around clumps of grass and sand patches in Spring Creek.

7. DJ Ellis caught the biggest limit of the event – 25 pounds, 15 ounces – thanks largely to a Zoom Magnum UltraVibe Speed Worm (red bug). He also mixed in a ½-ounce Z-Man/Evergreen ChatterBait Jack Hammer for his Top 10 performance.

9. Nicky Davico made his first MLF Top 10 from the front of the boat using a 3/8-ounce Buddha Bait In-Seine Swim Jig (purple haze), which he threw at anything from sand spots to shad spawns.

10. Terry Segraves added to his resume this week thanks to a ½-ounce Z-Man/Evergreen ChatterBait Jack Hammer with a Reaction Innovations Skinny Dipper and a Megabass Vision 110.