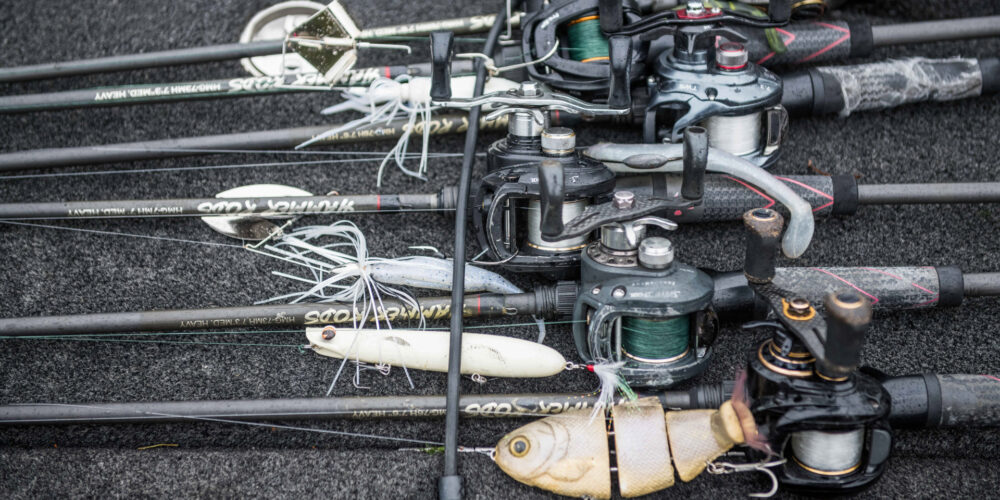 COUNCE, Tenn. – The fishing in the Toyota Series Championship Presented by Guaranteed Rate at Pickwick Lake turned out to be a lot tougher than many expected. Still, many of the typical fall patterns played and it wasn’t a huge surprise to see grassy bars, punching and tailraces turn in good numbers in the fall on the Tennessee River. If you need a few new ideas for what to throw in the fall, give the top baits from Pickwick a look.

1. Local guide Brent Crow survived the first two days of the event thanks to a ¼-ounce shaky head with a Berkley PowerBait MaxScent Hit Worm Magnum thrown on 15-pound Berkley X5 braid with a 15-pound Berkley Trilene 100% Fluorocarbon leader. An Abu Garcia Fantasista Premier rod matched with an Abu Garcia Zenon reel was the combo of choice for the shaky head. He also weighed a few fish on ¾- or 1-ounce homemade jig with a Berkley PowerBait MaxScent Chigger Craw trailer. But, the real hero was an old Bomber Long A thrown on 15-pound Berkley Trilene Big Game monofilament with a 6-foot, 8-inch medium Abu Garcia Jordan Lee rod.

2. Mikey Keyso did what he does best for his runner-up finish. A 6th Sense Vega frog (which he lost during the event) was a big key, especially on the last two days. Punching, however, got him some of his bigger bites. For that, the Florida pro used a 1 ½-ounce Hawg Tech Tungsten weight, a 3/0 Mustad hook and a Reaction Innovations Sweet Beaver or Kinky Beaver (magic craw swirl). He used Scenko Stix Rods for both techniques.

4. One of the other pros with plenty of experience on Pickwick, Cody Nichols threw a variety of stuff on his Hammer Rods for his showing. A 6-inch Bull Shad got him some bigger bites, but an ima Little Stik 135 and ½-ounce Z-Man ChatterBait Jack Hammer (Brett’s bluegill) with a Reaction Innovations Skinny Dipper trailer helped him cover some water around grass.

5. Fishing shallow bars on the upper end of Pickwick, Jeff Reynolds kept a River2Sea Whopper Plopper 130 moving to add another Top 10 to his resume. He threw it on a 7-foot, 3-inch medium-heavy Crotalus Custom Rod with 50-pound braid.

6. Working grass with moving baits is nothing new for Todd Castledine, so it’s no surprise he caught the bulk of his fish on a Strike King Hybrid Hunter and Sexy Dawg Hard Knock. For the Hybrid Hunter, a 7-foot, 6-inch medium-heavy Lew’s Super Duty with a Lew’s reel and 20-pound Sunline fluorocarbon is was his go-to setup.

8. Dakota Ebare made his second-straight Top 10 at the Toyota Series Championship by junk fishing to a degree. Among the pile of Hammer Rods on his deck were a buzzbait, a Strike King 4.0 Magnum Squarebill and a Carolina rig with a Zoom Super Fluke, which he threw around shallow, current-related areas up the lake.

9. Barry Graves made the drive all the way from Canada and represented the International Division with a Top 10 in his first Toyota Series Championship visit. To catch his fish, Graves caught almost everything with either a 5/16- or 9/16-ounce Punisher Jig (black) with a Zoom Tiny Salty Chunk trailer (green pumpkin) tossing it around grass on shallow bars.

10. A breakdown on the final day cost Aaron Johnson some money, but a Top 10 is still nothing to sneeze at. Doing most of his damage around shallow grass, Johnson used the same modified square-bill crankbait he fished with so much success in his win on Sam Rayburn in 2020.