Top 10 Baits from the California Delta 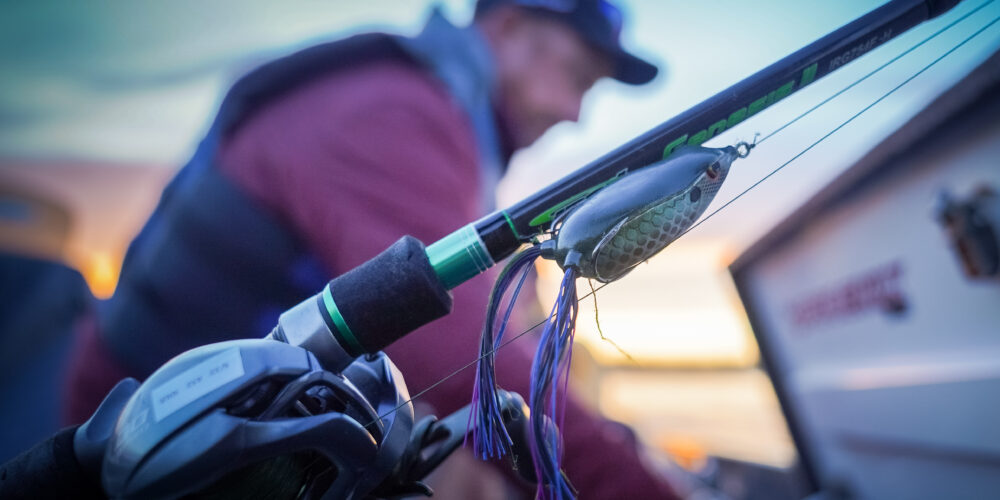 BETHEL ISLAND, Calif. – The California Delta lived up to its reputation as a famously abundant and often fickle fishery this week during the Toyota Series Presented by A.R.E. Western Division finale. Over the course of three days, the weather shifted dramatically, transforming slack conditions on Day 1 into wind-battered swells on Day 3. To combat the weather, the top anglers in the field relied largely on the river system’s flourishing mats of vegetation and tule grasses to harvest bass from both topwater and beneath the shade.

Here’s a look at what they used:

1. Tournament champion Stephen “Bub” Tosh turned to a pair of out-of-production baits to deal damage. Tosh said the Paycheck Baits Punch Skirt and Paycheck Baits Transporter Frog—a lure he helped design — were both instrumental in his win. He supplemented those baits with a wacky-rigged Yamamoto Senko, a ChatterBait and a Lobina Rico popper.

2. Lane Olson came just shy of capturing the crown by covering territory with a 1/2-ounce Z-Man ChatterBait Jack Hammer in hot craw. He also deployed a Jackall Gavacho Frog up top and punched mats with a Reaction Innovations Spicy Beaver.

3. Nick Salvucci punched his way to a 20-pound bag on Day 1 and 19 pounds on Day 2 before falling one fish short of a limit on the final day. To notch his high finish, he used three G Money Jigs Punch Skirts on three different weights, ranging from 1/14-ounce to 2-ounces. For his plastic, he went with a Big Bite Baits Yo Mama.

4. Randy Pierson rolled into the Delta with a plan to focus on a limited amount of water. He relied on a 6-inch Berkley Hollow Belly Swimbait and a Z-Man ChatterBait Jack Hammer with a Strike King Rage Craw trailer to get the job done.

5. Ronald Lorenzo got off to a scorching start with a 27-11 limit on Day 1. However, changing conditions combined to slow the Princeton, California, angler’s pattern to close the event. Still, a respectable 52-7 three-day total brought him across the finish line in the top five. For his best days, he went with two topwater offerings: a D&M Custom Baits Double Hammer Buzzbait and a Snag Proof Bobby’s Perfect Frog.

6. Christian Ostrander brought in 52-5 over three days, including the Day 2 big bass of 7-12, by punching mats with two different color Missile Baits D Bombs on 1 1/2-ounce weights. One was a candy grass color and another was black with red flake. Up top, he used a Jackall Gavacho Frog.

7. The elusive specter of known Delta master Phillip Dutra was rarely spotted by the field. Somewhere in the labyrinth of canals, islands and mats, Dutra slung a Bobby D’s Custom Baits buzzbait, Damiki BTC 60 square bill, vibrating jig and a D Bomb to boat 52 pounds even.

8. Brett Leber was one of a number of top finishers to lean heavily on the Missile Baits D Bomb for punching mats. He complimented the strategy by using a ChatterBait to cover ground quickly and fish for reaction bites.

9. Benjamin Byrd put better than 48 pounds in the boat by utilizing a Z-Man ChatterBait Jack Hammer with a Missile Baits D Bomb trailer below the waves. Up top, he slogged out the ever-present Delta topwater bite with a Moreau Baits Topwater Walking Field Mouse.

10. Arizona angler Michael Caruso edged his way into the Top 10 behind the ubiquitous West Coast Roboworm Straight Tail Worm. He leaned on a 7-inch bait with Owner Cover Shot Worm Hooks and 8-pound Seaguar InvizX Fluorocarbon on a Megabass Brigand rod to boat 47-15 over the course of the event.