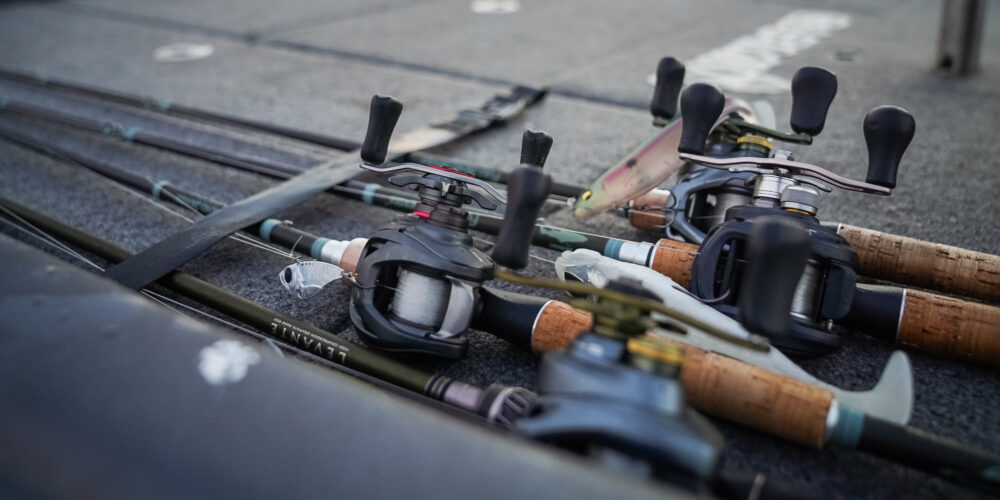 GUNTERSVILLE, Ala. – It was tough fishing on Lake Guntersville for the Toyota Series Championship Presented by A.R.E., but the Top 10 were able to use a variety of techniques and targets to bring in their bags each day.

Kyle Hall is a young man of few words, but the words he did say were quite enlightening as to how he was able to beat the rest of the 194-boat field.

“I was fishing in about 20 feet of water chasing suspended bass that were around bait,” Hall said. “I had two areas that I was mainly fishing that were just 5 miles from takeoff. One area dried up on the final day, so that really left me with one spot where I caught them all on Day 3.”

Marshall Robinson notched a second-place finish to Hall after catching a limit each of his three days of competition, totaling 53 pounds, 4 ounces, including two 19-pound bags on days two and three. Robinson steered away from punching grass mats or throwing a frog over the top of them. Instead, he stayed off in deeper water scanning for fish with his electronics.

“My main focus was finding the bait and staying out off the top of underwater humps in about 3 to 4 feet,” Robinson said. “I backed off to about 10 to 14 feet, really staying out past the edge cranking and throwing a jerkbait. I found a different area every day and got five good bites each day. I can’t complain.”

His main jerkbait was a Megabass Vision 110+1 in French pearl. The South Carolina angler also caught fish with a Damiki DC 300, a crankbait he hadn’t really used before this tournament.

“I think my dad gave it to me a while back and I just kind of found it randomly in one of my boxes,” Robinson said. “I thought it mimicked the bait pretty well and it worked out for me.”

A third-place finish at 52-6 for Drew Gill came via a duo of baits — a Strike King Sexy Dawg Hard Knock and a 4.5-inch Strike King Shadalicious Swimbait. Those two baits, and three main areas he was fishing, were what netted him a Top 10 finish on Guntersville.

Matt Wieteha arrived at Guntersville for practice with one strategy in mind — punching grass — but quickly realized he needed to change course.

“I realized that the bass were feeding on bluegill on secondary points or in the first third of a creek,” Wieteha said. “I had two white vibrating jigs tied on, so I switched those to green pumpkin and they seemed to eat it better. I would say 2 to 5 feet was really the key depth for me.”

5. Echols adapts as the tournament progresses

On Day 1, Scout Echols caught his limit flipping laydowns. It was successful, earning him one of seven 20-pound bags on Day 1. But early in Day 2, he realized that pattern was done for. He reassessed and decided that he needed to move out towards the Guntersville grass if he wanted a chance to win.

“The final two days I really kept that jerkbait glued to my hand,” Echols said. “I was targeting grass lines and bass around bait, but the bass were moving a lot, so I had to keep up with them. I think I was around the right fish to win; I just couldn’t get them to bite. I wouldn’t have done anything different than what I did, though.”

Echols utilized a Megabass Vision 110+1 jerkbait in M shad color to catch his bass over the final two days. He finished with a three-day total of 14 bass for 47-4.

6. Becker junks it up for another Top 10

While a bulk of the action was happening further south on Lake Guntersville, Matt Becker decided from the jump that he was going to focus his time and attention a little further north on the nearly 68,000-acre reservoir.

“Fall fishing is tough, so I made up my mind that I was going to spend all my time in a productive area,” Becker said. “I was in that area from Goose Pond to the Highway 35 bridge just junk fishing around. I was able to weigh-in five each day just by fishing what was in front of me.”

Becker’s main bait was a ½-ounce Z-Man ChatterBait Jack Hammer with a Lake Fork Live Magic Shad trailer. He ended his tournament with a limit each day and a total weight of 47-1.

Cole Breeden earned a seventh-place finish by finding offshore bass with his electronics.

“On the first day, I was graphing around just looking and I ended up finding all the fish I would catch for the week,” Breeden said. “A lot of the fish were in about 20 to 25 feet of water in the creek channels. They would start their mornings toward the mouth and work their way back as the day went on. They were feeding, so if I could get my bait in front of them, they would bite.”

Those feeding bass ate up his Strike King Baby Z-Too in gray glimmer pearl belly on a homemade ¼-ounce head as well as a 4.5-inch Strike King Shadalicious Swimbait on a ½-ounce homemade head. He caught a limit each of his three days, but he wasn’t able to find the quality that the other anglers in his area had.

“I shared an area with Drew Gill and Kyle Hall all week, and those guys just seemed to be on the bigger fish than me,” Breeden said. “I think they were more focused on the single roaming fish rather than focusing on the bait.”

Todd Castledine led after Day 1 and was just ounces off the lead after Day 2, mainly due to the fact that on a crowded Lake Guntersville, he had a large area all to himself.

“No one was fishing in my area all week, so I felt like I had a really good shot to win,” Castledine said. “For whatever reason, my fish just left on Saturday. They moved out away from the docks and off somewhere else.”

Castledine was targeting docks in about 2 feet of water with a ½-ounce Strike King Denny Brauer Structure Jig with a Strike King Baby Rage Craw trailer. When he found a target around a dock that called for something different — like a patch of grass or other cover — Castledine threw a Strike King Pad Perch in the warmouth color.

If you were looking for Donny Bass, you probably would have found him punching grass in Dry Creek for most of the week.

“I’m from south Florida, so I came in with the plan that I was going to punch a lot this week,” Bass said. “Looking back on it, I probably should have spent some more time looking for schools because I only had one located.”

Bass caught his bass with a one-two punch of a Gambler Boxer Craw in magic craw with a 1.5-ounce Hawg Tech tungsten weight and a lipless crankbait. When he felt the grass bite was failing he switched over to a lipless crankbait to try to entice the pressured Guntersville bass that way.

Seth Davis relied on an old tried-and-true Tennessee River formula to catch his fish on a tough Guntersville last week.

“I was trying to separate myself from other guys as far as what I was doing, and that was Spookin’ bars,” Davis said. “Everyone on the Tennessee River knows about Spookin’ bars, and I noticed that I caught some bigger fish doing that. I didn’t really find any schools of fish doing that, I was mostly just working down those stretches.”

Davis relied on a River2Sea Whopper Plopper 130 and an Evergreen Shower Blows 125, both in bone. The Tennessee pro wouldn’t just fish any bar, though. It had to have the right grass and depth for it to be deemed worthy.

“It had to have clumps of stuff other than eelgrass, like hydrilla or stargrass,” Davis said. “A lot of the stuff was a little deeper, but I feel like the eelgrass acted like an artificial bottom. When the sun was high, the grass I was fishing had to be visible. I was in about 6 feet of water for the most part.”