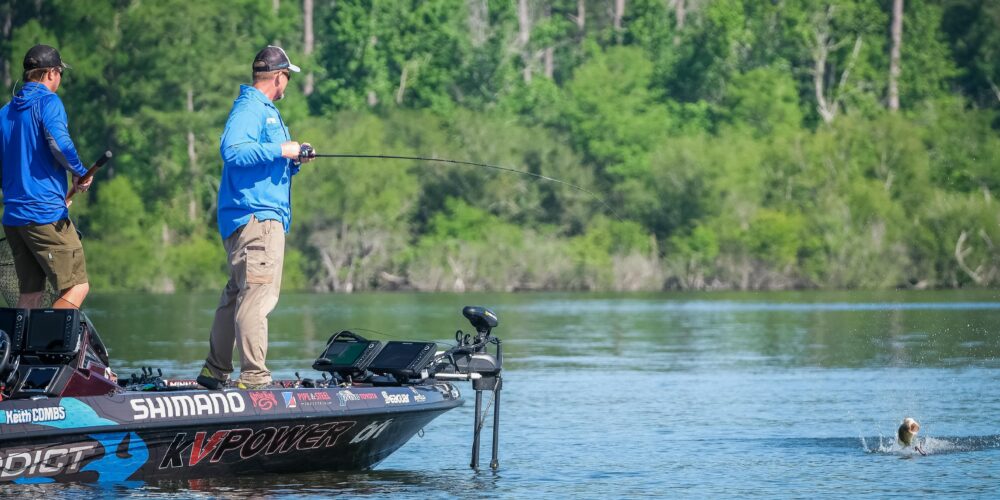 BROOKELAND, Texas – Sam Rayburn is best known as a big-bass factory. And for the final stop of the Toyota Series Presented by A.R.E. Southwestern Division Presented by Outlaw Ordnance season we got a glimpse of that.

With some fish shallow, some deep and a lot of them in transition, big fish were hard to locate throughout the event. Winner Hayden Heck and most the top anglers intercepted enough of the big girls on staging areas, especially mid lake, but how they caught them seemed different for everyone.

Confidence is a good thing. Too much of it, though, can be your downfall. It sure was for Keith Combs the final day.

On a lake of hammers, Combs may be the best on it. He won last year’s late spring Toyota Series event here, and he was primed to do it again when he went into the final day leading. Yet, he admits he let this win get away from him.

“I messed it up,” Combs said. “I think I got a little too confident and set my sights on 25 pounds (Friday). I know Rayburn is different on Friday, Saturday, Sunday. I know it. But I didn’t factor it in.”

While he may have tripped at the finish line a bit, Combs still showed he’s one of the best, especially when he cracked 28 pounds, 11 ounces on Day 2. And while it’d be easy to think he did it the same way he did it last year, seeing as the tournaments are almost the same week of the year, this year he changed it up and focused more on shallow transition spots just outside of spawning areas from around the 147 bridge to all the way up north.

The spots were small and typically had small groups of fish, but when he found them he could usually get a flurry cranking Strike King 5XDs and 6XDs or dragging a Strike King Structure Jig with Strike King Rage Craw trailer. He also mixed in a jerkbait.

Unfortunately, he had two spots he’d barely touched the first two days he was saving for Day 3, but those fish never fired.

Having a house on the lake for 30 years, one might think Brian Schott would have plenty of sneaky spots. No doubt he does, but for this event he figured community holes were just fine.

“I just ran a milk run of little community spots I always like to fish,” Schott said. “Just running and gunning. It was a lot or one- or two-cast spots. Either they were there or they weren’t.”

Schott figures he “only” hit 40 spots a day all up above the 147 bridge and admits there was no real pattern. He might run to a deep hard spot and then fish some shallow bushes before hitting a mid-depth lip. And because his locations changed so much, so did his lures, as he threw a  Zoom Ol’ Monster, Norman DD22 and a Carolina rig with a Zoom Brush Hog for the majority of his fish. Though, he did also have some fun with a swim jig around cypress trees, too.

With the wind on Day 2, some of his spots got blown out, and come Day 3, he simply could never find a big enough bite to really make a run at the win.

Wyatt Frankens had one goal – qualify for the Tackle Warehouse Pro Circuit. Well, he did that, but it certainly wasn’t easy.

“To be quite frank, it’s been a stressful week after the practice I had,” Frankens said. “It was terrible.”

Despite Sam Rayburn being his home waters, no real pattern emerged. That meant he’s had one pattern – scramble.

“I was just scrambling,” Frankens said. “It was a mixture of shallow and deep. I was fishing free, and I think that’s what helped me, actually.”

Hanging around the mid-lake area, Frankens sampled a little bit of everything. He junked up shallow with a frog, and cranked a 6th Sense Swank and Z-Man/Evergreen ChatterBait Jack Hammer around grass. However, his bigger bites all came out deep fishing brush piles.

“The fish weren’t in the piles, just sitting around them,” Frankens said. “I think that’s why I was getting bit on that crankbait. There were crappie in the tops of the piles, and the bass were just lingering. And that Z Boss 20 is a big profile like a crappie.”

With years of experience and success on Rayburn, Kevin Lasyone was not about to overthink this tournament.

“All I did was throw a V&M Wild Thang Worm (blue flex) to hard spots and brush piles,” Lasyone said. “Simple as it gets.”

Heck, while many pros were running dozens of spots, Lasyone only rotated through three offshore transition spots around the 147 bridge he felt had the best fish. Why? Because that’s where he’s always caught his best fish this time of year.

“I didn’t have much time to practice,” Lasyone said. “I monkeyed around a little bit Sunday. Worked Monday. Decided to get into the tournament Tuesday and got fifth. Not bad.”

Cole Stewart loves to drag a worm, and openly admits to not enjoy moving baits. Fortunately, he didn’t let those facts hold him back this week.

You see, Stewart found three 6-foot creek swings that were perfect transition spots. One had a little grass and the other two had hard spots, making them perfect to drag his worm. Unfortunately, while he got a few to eat a Zoom Ol’ Monster, it wasn’t all he’d hoped. So, he switched it up.

“I don’t really like moving baits, but it was catching them,” Stewart said of his Z-Man/Evergreen ChatterBait Jack Hammer, which he cut the skirt off and put on a Zoom Super Fluke (pearl) trailer. “I’d let it sink to the bottom and slow roll it back. I was catching so many fish and kept culling up. So, I kept throwing it.”

Dock talk all week was how incredible the shad-spawn bite was going to be. And then, it wasn’t.

While there were shad spawning in droves, few anglers could catch any quality (or even any fish) around those areas. That is, except Chris Jones.

“I looked out quite a bit in practice and found some fish, but I never found the right ones,” Jones said. “I knew there was a good shad spawn going. So, I figured I’d just fish to my strength.”

So, that’s what he did, focusing solely around hay grass from Caney Creek on south. And to say the action was fun is an understatement, as Jones only needed a 5/16-ounce Booyah Mobster swim jig with a YUM Spine Craw trailer and Booyah Pad Crasher frog to catch dozens of fish a day.

“If I found hay grass with shad in it, it was just so much fun,” Jones said.

Giant flutter spoons have fallen off as go-to offshore lures, but don’t tell that to Jack York.

“Hands down, that’s my favorite way to catch a bass,” York said.

So, he was hardly upset when the only thing he could get bit on in practice was either a Lake Fork Flutter Spoon or a Nichols Magnum Flutter Spoons “dropped right on their heads.”

All week, York ran around burning gas looking for any transition area off a spawning pocket. Once there, he’d scan around with his forward-facing sonar for fish either in trees, brush piles, drains or even roaming around to toss that big spoon.

The result was catching 20-plus fish a day, but as anyone will tell you, the flutter spoon also means losing a lot of fish. For York, it meant losing a true giant the final day.

“I lost, hands down, the biggest fish I’ve ever hooked on Sam Rayburn [Friday],” York said. “She was easily 11-12 pounds. Just massive. That was a hard one to get over right off the bat because she was sitting right on top of the first pile I pulled up to in the morning. I dropped it down and she smoked it, but I just couldn’t keep her pinned up.”

When targeting a shad spawn, guys tends to focus on cover – cypress trees, docks, grass. Yet, that’s what made River Lee’s shad-spawn bite so odd. It wasn’t cover related.

“I started off every day on this crazy shad spawn in the Canyons,” Lee said. “Instead of throwing at cover, the fish would just come up busting in a 50-yard circle. I don’t know why they were there and doing that. They were just there.”

When the fish didn’t come up busting, Lee was able to catch some on a Carolina rig and a jerkbait, but a Heddon Super Spook (Lake Fork shad) was the ticket to bigger bites when they showed themselves.

When the bite fizzled as the sun got up, Lee would then run up north to flip cypress trees with a Texas-rigged Yamamoto Senko, noting the deeper and more isolated the trees on the main lake, the better.

However, one thing about a shad spawn is that it only happens early. So, when there was an hour fog delay the final morning, Lee was out of luck by the time he got to his “crazy” bite.

“The fog delay hurt the final day,” Lee said. “I really feel I could’ve had 20 pounds, but Mother Nature threw in a kink.”

Looking how he fell in the standings each day, one might think Marshall Hughes’ bite simply died. They’d be both wrong and right.

He was in third after Day 1 with more than 21 pounds thanks to an offshore cranking pattern with a Strike King 6XD (powder blue back chartreuse). Day 2, the intense cloud cover “turned his fish into dinks.”

However, with the bright sunshine the final day, Hughes felt confident he could get back over the 20-pound mark. And he had the bites to do it. He just didn’t land them.

“I broke off a giant in the trolling motor,” Hughes said. “She was a 7-8 pounder, and she just ran right at the boat and into the prop. And then I jumped off another 6-7 pounder. If I catch those I don’t win, but I definitely get another 20-pound bag.”