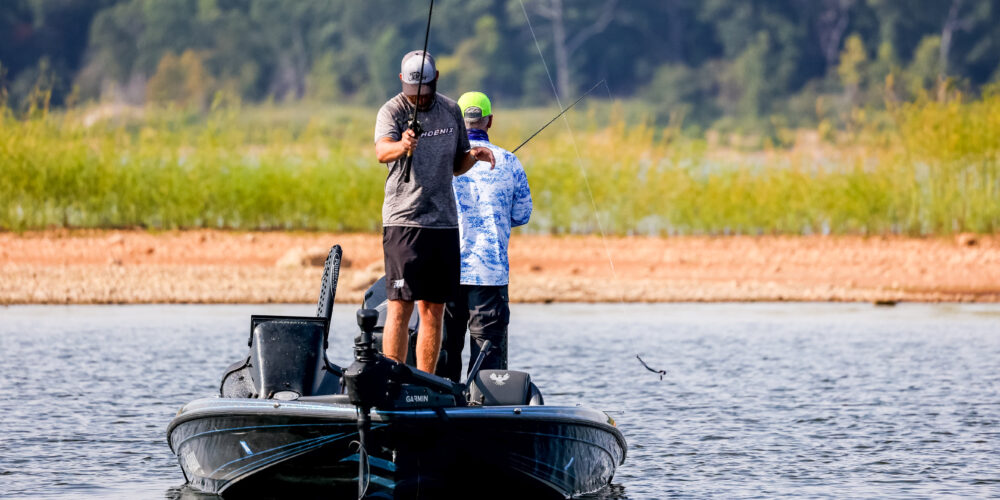 Brad Jelinek was one of a number of locals who excelled at Truman.
September 20, 2022 • Brenden Kanies • Toyota Series

WARSAW, Mo. – Like most of the country, Truman Lake is stuck somewhere between late summer and early fall. If you’ve ever headed to work in the morning wearing a jacket and came home blasting the air conditioning, you know exactly how confused the fish – and anglers – felt during this Toyota Series Presented by A.R.E. event.

Despite the tough conditions and an even tougher bite, Arkansas resident Hunter Baughman was able to capitalize on offshore brushpiles to bring home the win, putting his Brazalo jigs to work on waypoints found using LiveScope.

Here’s how the rest of the field stacked up behind him:

Local pro and fishing guide Brad Jelinek relied on his knowledge of the lake to land an impressive second-place finish. Dragging a big worm and football jig around key cover, he brought 47 pounds to the scales across three days.

“I was just dragging, dragging my life away,” Jelinek said. “I know every rock, stump, ledge and tree on this entire lake. This is the slowest and fewest spots I’ve ever fished on it in three days of fishing.”

With so much cover to choose from, selecting the right pieces was important – especially across a three-day event.

“I was keying on anything out of the ordinary,” Jelinek said. “It could’ve been a rock, stump, laydown, tree, if it was out of the ordinary and shouldn’t be there, I fished it. I spent my entire practice on the trolling motor looking for structure on LiveScope. 90% of it was terrible, but the other 10% was what mattered.”

A tight leaderboard and tough bite made it important for Jelinek to capitalize on the fish that did commit.

“I knew the quality fish were there, I just had to get them to bite,” he said. “I was very fortunate to land the ones that did bite. I didn’t lose a good fish all week.”

Another local hammer, Brock Reinkemeyer, stuck to a similar tactic – keying on underwater rock structure and timber to bag 46-8 and third place.

“Rock was where I thought I could catch big ones this week, and that’s where I caught my better fish,” Reinkemeyer said. “Then I went to brushpiles and laydowns, I’d just scan around on the flats and see what I could find. I was trying to find sneaky stuff the other guys weren’t seeing.”

While finding the best cover was key, Reinkemeyer focused on positioning his boat for success.

“It was important to be able to hold my boat position,” he said. “Instead of marking the cover, I’d set a waypoint where my boat position needed to be, then Spot-Lock on it later and fan cast the area. If you LiveScope too much you’re not fishing the area. I try to fish ‘em for real for at least 10 minutes.”

Reinkemeyer found it critical to land fish early, with many of his key bites coming first thing in the morning.

“The early bite was definitely important. If it wasn’t for the mornings, it would’ve been a rough week,” he said. “I was able to do a lot of culling later in the day, but having a limit early allowed me to go do that.”

Minnesota native Kyle Schutta wasn’t able to lean on local knowledge of the lake, but was quickly able to adapt – relying on flurries of fish for 46-1 and a top-five finish.

“I had a two-pronged approach,” Schutta said. “I had some ‘deep-ish’ fish I could catch cranking, and then I would go shallow and use a variety of tactics, mostly flipping. All of my fish came in 5 to 15 feet of water.”

Without a consistent bite, Schutta relied on heavy flurries of fish to land his limits in a hurry.

“Every day I had a flurry either deep or shallow, sometimes I’d catch my whole bag in an hour and a half of fishing,” he said. “It really seemed like 10 a.m. to noon was the prime time, that’s when I’d catch the majority of my fish.”

When cranking, Schutta was dipping his rod in the water almost to the reel, attempting to get the bait down in the water column as much as possible.

“I like the action of a squarebill, I think it makes fish trigger differently,” Schutta said. “When fishing deeper areas, I wanted to get that squarebill down there to grind into the rock and brushpiles.”

Truman lake is normally a vast reservoir, but with low-water conditions, it was fishing surprisingly skinny — especially for those at the top of the leaderboard. Overcoming the competition was key for Schutta.

“There were a lot of people around but I just had to keep my nose down and try to grind through them and do as good as I could,” he said. “When you’re flipping or cranking, if you can go a little faster or a little more precise than the next guy, that adds up at the end of the day. After three days of fishing that could be hundreds of trees that others aren’t hitting. When fish are hard to come by, that can make the difference.”

Plains Division Angler of the Year winner Michael Harlin focused on visible structure, relying on a drop-shot rig to bring in 39-1 and round out the top five.

“I caught all of my fish off of structure,” Harlin said. “Whether it was rock, the base of trees, brush, whatever I could find that was different in the area was what was holding fish.”

Doing something a little different than the rest of the field, Harlin used a drop-shot to slow down and put his bait right in front of the fish.

“I was keeping it pretty simple, pitching a drop-shot around on a ½ ounce weight,” he said. “I think that’s key with the pressure and a tough tournament. I realized I was getting bites on it and it ended up working out for me.”

Taking his time and grinding through a rough mid-morning lull was important to Harlin’s success.

6. Miller Adapts by the Day

Finishing in sixth place, BJ Miller was able to adapt to a changing bite, landing 38-3 over three days. After catching fish on standing pole timber in practice, Miller watched that bite disappear at the start of the tournament and began flipping creature baits to offshore brushpiles.

“The first couple days I fished quite a few brushpiles,” Miller said. “Some of them were out on the gravel points and some were back in gravel pockets. That seemed to work well, I just never got the bigger fish.”

When that bite dried up on Day 3, Miller called an audible and went back to the strategy he found during practice.

“I stopped catching them off of gravel, so I went back to windblown points with standing timber and caught them in that.”

None of Miller’s fish came easy, and he had to make the most of every opportunity. Fortunately, he was able to do just that–and scrape out a Top 10 finish.

“I didn’t have a limit until later than noon any day of the week, it was just an absolute grind,” Miller said. “Every keeper that went in the boat went across the stage.”

7. Wood Cover Is the Ticket for Gill

Landing his second career Top 10 finish, Drew Gill picked up a pattern on the first day of practice and never looked back.

“The first morning of practice I planned to run up into the creeks,” Gill said. “I hit an underwater stump while on pad that stopped me dead in my tracks. I said ‘that’s enough of that,’ and turned around to fish the main lake.”

Gill began flipping visible timber with a 12-inch worm and caught a keeper on the first tree. After that, he took the hook out for the rest of practice and proceeded to mark 60-plus waypoints that he utilized the rest of the derby.

“I ran brush and stumps the last few days, fished a spinning rod a lot, threw a big worm, a jig, and ended up catching a few on a hair jig as well,” Gill said. “I had an early bite when the fish would slide up on the shallow brush, and I’d catch a few keepers. Then I’d hit a lull from 10 a.m. to noon and I’d start catching them again.”

Going with the flow was key to Gill’s success, especially with the added pressure of other anglers on his side of the lake.

“I had several boats cycle through my areas throughout the tournament, the fish were under a lot of pressure,” he said. “They’d totally reposition and slide out to deeper stuff. Fortunately, I was able to relocate them and cull a couple late in the day.”

8. Parsons Knocks Down Another Top 10

“Sometimes they’d be up on the bank and then hourly it would change,” Parsons said. “The wind was blowing and the shad were moving in and out, if the shad were all the way in the back of the pocket, you could catch them back there. If the shad moved out, so would the fish.”

Parsons didn’t key on one specific type of cover, opting instead to hit as many trees as possible, not spending too much time in one place.

“I had the trolling motor on high, I was banging the bait off everything out there,” he said. “If they were there they’d get it, I just had to cover enough water. I used my graphs to follow the baitfish, but I’d pitch to every tree, whether the bass were showing up on LiveScope or not.”

Fishing a finesse jig and Texas-rigged tube, Parsons flipped to each tree, trying to trigger a reaction bite on the fall.

“The bait falling fast was important,” he said. “I couldn’t get fish to bite while I was swimming the bait. If you could pitch it down with slack, they’d pick it up off the bottom and swim off with it. It was purely a reaction bite on the drop.”

9. Bridges Stays in the Dirt

Fishing shallow was the name of the game for Chris Bridges, who caught all of his fish in 5 feet of water or less on a squarebill and spinnerbait. He battled the wind and a tough bite to bag 35-7 during the week.

“I caught all my fish in 5 feet or less, shallow,” Bridges said. “I was just covering a lot of water with the moving baits and flipping a lot of timber on flat points—keying on certain kinds of trees.”

It wasn’t the other anglers that impacted Bridges’ bite most, it turned out that his biggest competition was the wind.

10. Shallows Play for Proffitt as Well

Greg Proffitt also stayed dirt-shallow all week to land a 35-2 total and round out the Top 10. While bites were few and far between, they were fun when they happened – with most fish visible when taking the bait.

“I fished shallow flats, all the fish were in anywhere from 6 inches to 3 feet of water,” Proffitt said. “I was getting a few topwater bites on a Whopper Plopper and buzzbait in the morning. I only got a couple bites, but they were key fish.”

Proffitt had to work for every fish that came across the scales, but he had almost all of his locations to himself–a rarity on a busy tournament weekend.

“I had three really good areas, and I just rotated them. I had nobody around me until the final day, so I had almost everything to myself,” Proffitt said. “It was a grind, but it was fun.”