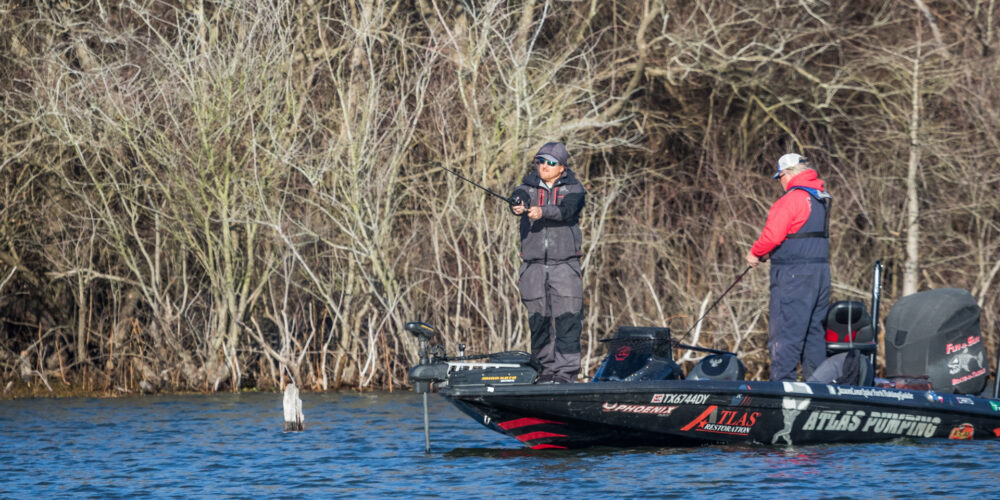 No doubt things were a little tougher on day two of the Toyota Series presented by A.R.E. event. That being said, the tournament – which is presented by Berkley – finally showcased what Rayburn can do. Two bags surpassed the 30-pound mark today, with leader Derek Mundy weighing the second-largest limit in Toyota Series history worth 39 pounds, 7 ounces.

Warmer weather tomorrow and some wind could really help ignite the bite for the anglers sitting in the shadows behind Mundy. So, here’s a look at how the rest of the top pros are getting it done on Big Sam.

Top 5 Patterns from Day One

If not for stubbing his toe on day one, Jason Bonds could very easily be leading this tournament. The Rayburn hammer caught just two fish worth 5-14 on day one to sit in 158th place. But he wasn’t going down without a fight, and certainly wasn’t going to let Mundy have the only big bag of the day.

Today, Bonds sacked 34-1 to rally all the way to second place and he now has a shot at going from zero to hero in a huge way.

“It beats yesterday,” Bonds says of his day-two performance. “I did lose two good ones yesterday, so that hurt. I was in a pretty bad place yesterday after this thing. You know, on your home lake and you can’t even catch a limit when it’s fishing as good as it is. I felt bad and was really aggravated.

“This morning I just kind of went out and started grass fishing and caught a pretty decent limit. I culled a couple times and then went to a little spot and caught a big one. I thought if they were on that kind of stuff, then maybe they were on some other stuff I know about. I ran a few more places like it and caught two more big ones and went back to where I caught the first big one and got another one.”

Bonds basically threw his playbook away from day one and started fresh.

“I did fish one place I caught a 4-pounder off yesterday,” Bonds says. “I didn’t know how they were set up there, but I kind of figured it out today. I didn’t have nothing but time today. I wasn’t losing anything with 5-14, I was thinking I’d need 35 pounds to make the cut. So, I just went out and fished relaxed.”

Bonds admits he wasn’t sure what his weight was when he put four big ones in the livewell to go with one 15-incher. He knew his bag was good, but he wasn’t sure how good. He tried to cull the rest of the day, but couldn’t make it happen. Still, he’s not overly concerned about his 12-5 deficit.

“Mundy needs to stumble and I need to come on back,” Bonds jokes. “But it’s doable and the lake has ‘em right now.

“The cold front hurt the shallow bite for me. But I’m gonna be up there shallow tomorrow because if you’re the first one up there when they move up you can bust 35 pounds no problem. I’ve been in the lead before in these and felt a lot of pressure, but now I’m just going fishing.”

Moving from second to third, Jason Conn backed up his 21-6 weight from day one with 18-3 today to keep his name in the hat for the title.

Conn capitalized on an early bite on day one, but after another cold night things started off a little slower.

“It was colder this morning and my fish were still there, but they were a little finicky,” Conn says. “I was getting bites and they would just smack the bait and knock slack in my line, but not get it. I knew it’d get better as the day went on.”

With a 5-pounder in the boat early, Conn had a good foundation to build on for the rest of the day.

“I had three fish in the boat by noon,” Conn says. “I ended up culling two or three fish within the last 30 minutes. I started catching fish that I felt were moving in and coming in and staging. I’m fishing a small area where the fish are going to spawn, but it’s got an old pond, a bunch of flats and a deep ditch. So I’m excited to get out there tomorrow because I feel like I have more moving into the area.”

To get this far, Conn has leaned heavily on a reaction bite. A lipless crankbait and vibrating jig have done the damage so far, and he doesn’t see that changing tomorrow.

Aaron Johnson joined the trend of improving things on day two by catching 20-2 to move from 15th to fourth.

“It was a little better than yesterday, but I didn’t catch as many fish,” Johnson says. “I was just concentrating on where I thought the better fish were.

“I’m fishing two main areas. One really big area with a lot of traffic in it and one that has nobody in it and that’s where I’m getting the majority of my larger bites.”

Like the rest of the pros, Johnson isn’t totally sure what to expect tomorrow. With highs near the 70s and warmer overnight lows, plus a few local tournaments, Johnson may have to abandon his productive areas.

“I may have to expand on stuff tomorrow,” he says. “There’s some one-fish places I haven’t hit, so I may try that. But there’s going to be a lot more traffic out tomorrow.

“The area I’m getting my better fish doesn’t look good, it’s got dirty water and there’s no drain. I just happened to run into those fish on Wednesday and I hope I can get them for one more day.”

Backing up his 20-14 limit from day one, Jeff Reynolds slid down one spot with 15-7 to keep him in the top five.

“I really thought I had something figured out, but at 11:30 today when I had one keeper I realized I didn’t have anything figured out,” Reynolds says. “What I was doing yesterday just died. I fished around and finally scrapped what I was doing and caught a couple keepers up shallow where I knew I could catch some. Not tournament winning fish, just keepers.

“I caught four and then went back out to try for some bigger fish and caught just keepers. Then about 3 o’clock with a 4:30 check-in, I had about 9 pounds in the boat and pulled up on the right spot. I caught a 5 and 3 and one about 2 ½ and that gave me about 15 pounds.”

Pressure has gotten to the majority of stuff Reynolds has been fishing, so tomorrow he’s thinking about making a big change.

“The stuff I’m fishing is getting beat to death, so tomorrow I’m going to the total opposite end of the lake I was today,” says Reynolds. “When you get to this point, you can’t fall too far, so you might as well swing for the fences. At any cast on this lake, whether you’re in 25 foot of water or 2 foot of water you could catch a 10-pounder. You can pull up in the right spot and catch 30 pounds in no time.

“So, I mean, it’s the right time of year. There’s some big ones out deep, there’s big ones up shallow, so I’m going to turn and burn and do what I like to do.”