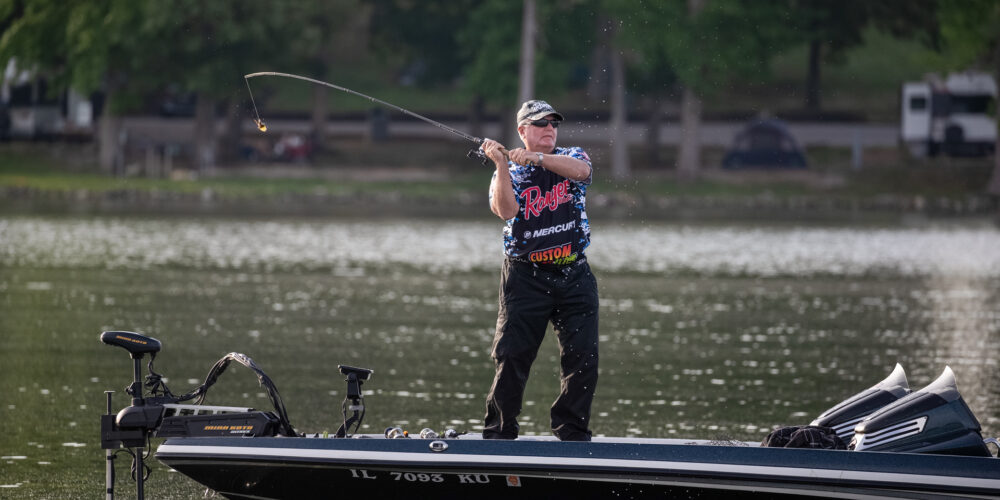 CHATTANOOGA, Tenn. – Kevin Meunier only caught 13 pounds, 4 ounces on Day 1 of the Toyota Series Presented by A.R.E. Central Division event on Lake Chickamauga. But on Day 2 he brought the biggest bag of the tournament, so far, to the scales. The five bass weighing 23-10 catapulted him into the lead by more than 3 pounds.

In spite of cloud, rainy weather, Meunier went against the grain and spent most of the day sight fishing. One fish, his biggest at 7-11, he had spotted the previous day went back to catch it. He said his other big fish he “just stumbled onto.”

Here’s how the rest of the pros stacked up behind him.

Tommy Brown said he may have claimed the Day 2 lead if he hadn’t lost a 7-pounder he watched take his bait.

“Everything has been shallow this week,” said Brown. We should be getting into some postspawn but it seems right now you just have to get shallower than shallow.”

In spite of fishing shallow, Brown says he is casting a huge swimbait.

“Everybody is throwing little swimbaits,” he said. “You’ve got to throw something so they can see it.”

He says he’s still got a few places left in his “rotation” that he hasn’t fished yet, so he is upbeat about Saturday’s final.

All fishermen seem to have sad stories. Trevor Prince is no different.

“I had a bad morning,” he said. “They just kept jumping off on me and I was thinking, ‘what’s going on.’”

He recovered however late in the day, catching his biggest fish about 30 minutes before he quit fishing, allowing him to cull a 2-pounder.

Prince said most of his fish were coming about 10 feet deep, give or take. He was concentrating on shell beds he had fished before, but admitted he did plenty of junk fishing as well.

“Hit the shell beds, then go flip some docks, just whatever,” he said.

Prince gave up some fishing time at the end when violent storms and wind moved across the lake.

“Coming back in was terrible,” he exclaimed. “We came on back in early. I had what I had. We just couldn’t fish anymore (in that wind).”

Asked what he used to make the cut today, Michael Black said he throws jigs, period.

Unlike other anglers, he was not fishing shallow, concentrating on mid-range depths much like Prince. He’s also not running very far from the launch point, Chester Frost Park.

“The first thing I thought was, ‘I hope it’s a bass and not a drum,” he said with a laugh.

“I felt from the beginning that consistent 15- or 16-pound bags would get you in the Top 10, the way the lake’s been fishing,” he said.

He said the rain and cloud cover made his fish much more willing to bite.

His go-to pattern was finessing along the bank with a wacky rig.

“I was staying fairly shallow, generally 3- to 7-foot deep, and just picking through every little piece of cover I could find,” outlined Drake.