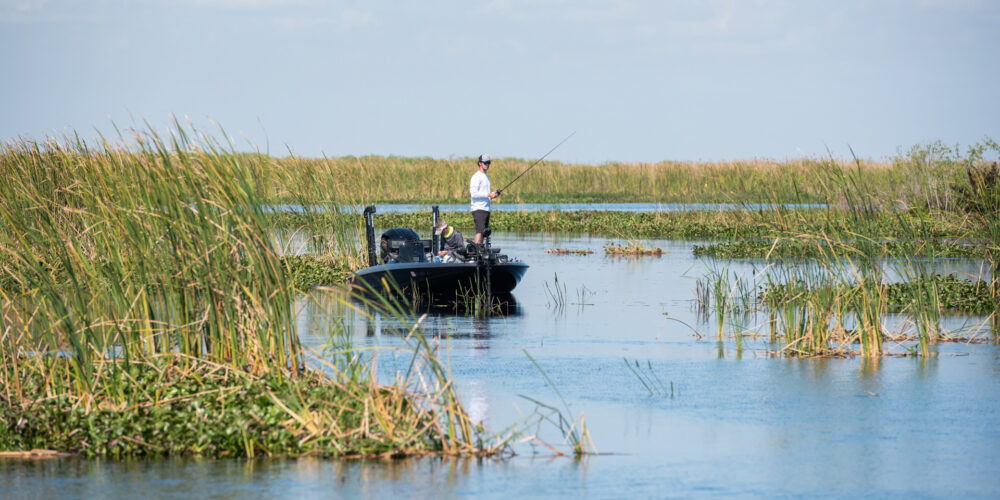 With frigid early-week temperatures in the rear-view mirror, Lake Okeechobee is thawing out in earnest. The thawing 80-degree weather is bringing with it some fishing that’s almost assuredly going to heat up over the final two days of the Toyota Series Presented by A.R.E. Southern Division opener, as evidenced by some quality bags weighed in by anglers in the later flights on Day 1.

Waves of prespawn fish, which have been hanging out in staging areas waiting for water temperatures to hit the sweet spot, seem to be moving shallow, and anglers in the 271-boat field are taking advantage. Nearly every pro in the Top 5 spent some or most of their time on Day 1 probing shallow spawning areas where they expected big bass to move up to at some point throughout the day.

Each angler who made the Top 5 on Day 1 was doing something a little different, but all of them were doing the same thing: waiting for new waves of big females to come to them.

While practice proved to be tough for Christian Greico, the Tampa, Florida pro knew it wasn’t going to matter all that much. With temperatures rising and fish moving up, all he wanted to do in practice was identify some areas in which he knew the fish would be coming to him.

“I only got a few bites (in practice) and didn’t catch anything big, but I knew with the warmer weather, practice didn’t really matter all that much,” he said. “I was just going into areas I thought fish might be moving up into, just kind of checking around trying to find some stuff other people maybe wouldn’t have found since there’s so many boats (in the field).”

Greico spent his time on Day 1 doing a little bit of everything, junk fishing his areas at the north end of the lake with a swimbait, ChatterBait, swimming worm and any number of other Okeechobee staples, “just hanging out” in the hopes that a wave of spawners might pull up. He got that wave midday and caught a flurry of keepers before things once again went silent.

Greico expects to be able to find new fish in his areas tomorrow, though he’s worried about what fishing pressure might do to the productivity of those waters.

“I’m a little iffy about [repeating Day 1 success] with so many boats out here and everyone fishing the same areas,” he said. “It just depends on how many fish move up (overnight).

A lot of the field spent Day 1 flipping cover, but not many top pros seemed to be casting to fish on visible beds as Lee Stalvey did to start his morning.

Stalvey, who marked some fish on beds Wednesday during practice, had a pair of giants he planned to run to first thing on Thursday. Unfortunately, he had a late boat draw and expected those fish to be picked off before he could get to them. As luck would have it, his timing was just right.

“I marked them yesterday,” he said of his pair of big Okeechobee bass. “I drew boat number 202 and I didn’t think they would be there, but I got there this morning and there was nobody. Somebody was right behind me, though, and I had to make a decision: go to the 7-pounder or the 5 – and there were a couple of keepers with the 5-pounder. I just went to the 7 and caught it the first cast and went to the other big one and caught her first cast.”

While Stalvey weighed his bag down with those bedding fish, he filled out the rest of his limit winding a ChatterBait in that same area, sticking to his guns and waiting for the fish to come to him and knowing the warming trend this week should continue to make the fishing that much better.

“I’m hoping as long as we keep getting sunshine and warmer weather it should be getting better,” he said.

Even if it doesn’t, Stalvey says he has an 8-pounder on a bed that he found at the tail end of Day 1 and plans to start there first thing Friday morning.

Like many of the pros who weighed in quality bags they caught later in the day, DJ Timms benefited from a later boat draw and was rewarded for his patience in probing areas he knew fish would be moving into. After catching a kicker at about 11:30, Timms added the rest of his limit in about half an hour, all in the same area.

“There were beds everywhere,” he said of that area. “It just seems like a wave moved in. I don’t think these were the bites I was getting earlier in the week (in practice).”

Timms spent his time on Day 1 punching mats with a black-and-blue Bruiser Baits MacDaddy Craw and a 1 1/2-ounce weight on 80-pound-test braid. His first fish came on an isolated stick-up, but all the rest were caught on that punching setup.

As for what Day 2 will bring, Timms says he’s feeling “absolutely confident.”

“I feel like [the warming trend] is going to bring another wave,” he said. “There wasn’t many fish in there today, but they were the right ones. I think it’s going to keep getting better.”

Willy Dennison of Willoughby Hills, Ohio hasn’t been to Okeechobee in 27 years. In fact, he just started fishing again about three years ago after a long hiatus.

Instead of shaking off the rust, though, Dennison smashed it to pieces on Day 1 with 19 pounds of big Okeechobee bass, securing the No. 5 spot on the leaderboard and building some serious momentum for the rest of the event.

Despite a practice Dennison admits was horrible, he was trying to practice in areas where he expected fish to be coming to him. That’s just what they did late in the day on Thursday.

“I got lucky and ran into them this afternoon at 2 o’clock,” he said. “I fished everything in practice that I could find, and these fish moved up on some reed heads and they weren’t there in practice. It got sunny on one side of those reed heads, and the fish were on that one side and I limited out in about an hour and a half.”

Dennison chose not to divulge too much about his baits or presentations from Day 1, but he did say he doesn’t expect to go to his best area until later in the day on Friday since his best bites didn’t come until the afternoon on Day 1.