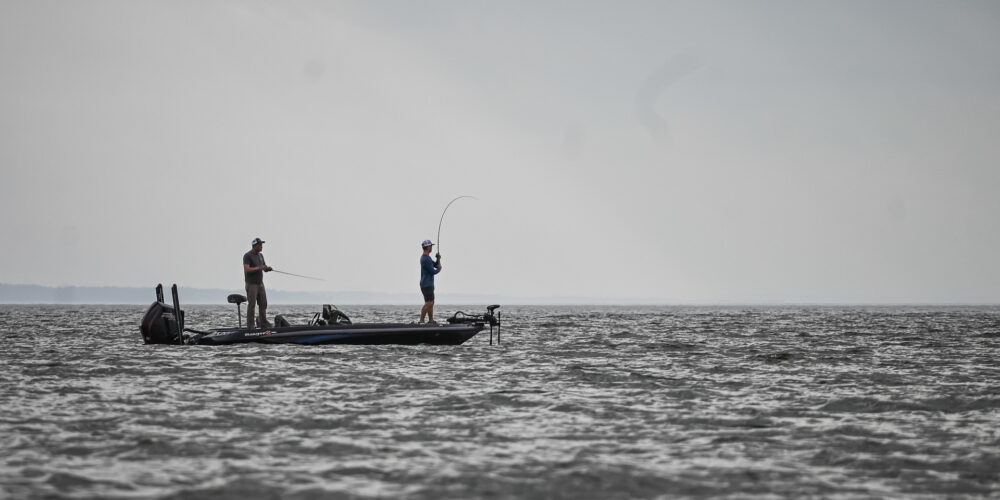 With heavy winds battering Sam Rayburn for much of the first day of competition, anglers turned to old tricks, hidden areas and windbreaks to climb into the top five in the Toyota Series presented by A.R.E. Southwestern Division event. From junk fishing to flipping, here are the top five patterns from day one. As ever, anglers are holding much of their competitive knowledge close to the vest; but wisdom can be gleaned between the lines.

Josh Bensema closed Day 1 with 21 pounds, 1 ounce largely gathered from a point on the main lake.

“I was targeting the shad spawn,” Bensema explains. “I was using a little bit of topwater, but also doing a bit of dragging with a Carolina rig.”

“The water went up, and that made me go look for areas that I could get to the bank at. I needed them to not have a bunch of bushes or grass.”

The majority of his weight was onboard before 8:30 a.m. Only two small fish were culled in the later parts of the day off of sheltered areas. Bensema says his main pattern was busted up early by heavy wind that shut the point down and made fishing there impractical.

“I’m going to go start at the same spot and I expect it to be better if the wind doesn’t blow as much,” he adds. “There is a little schooling activity, and the wind blowing really hard affected that and kept the bass from coming up strong for those shad. If that wind lays down, I should catch them for a lot longer.”

Mitchell Webb just missed the 20-pound mark with a 19-11 bag that took him by surprise.

“I had a pretty terrible practice,” he says. “Today, I just wanted to make sure I caught five fish because I am in pretty good position for the championship. At my second stop, I caught a big one, and then I just kind of rolled with it to see what was going to work. I caught another big one, and then I had a bag going.”

Webb cited strong winds and fish that are in between spawn and postspawn as major challenges during this event.

“They are trying to move out deep, but the big ones seem to have been caught in between somewhat.”

Webb says he has been targeting fish in the middle of the water column while searching for “the right grass.”

Troy Roder’s greatest obstacle on the first day was getting through schools of small, postspawn fish over grass.

“You just have to keep going until you run into a big one,” he says. “I got lucky today and ran into two big ones. I am fishing shallow over grass. I pretty much practiced the same way and so far, it is holding up.”

Roder says he is doing his best to stay out of the wind, but says that wind can help the fish. As he looks to improve upon the 18-15 mark he posted today, he’ll look to lessening winds for a hand.

“It should be better fishing tomorrow,” he adds. “But I could have 10 pounds. I just don’t know.”

Cameron Mattison finished the day with 18-6 but he needed every last minute to do it.

“I only had 6 pounds at noon,” he says. “Then, I scratched everything I was doing and went with my gut. I really just went fishing with my gut.”

Mattison said his gut guided him to his history of the lake, to shallow areas where he knew fish lived. From there, he put his head down and tried to make them bite.

In the final 20 minutes of competition, Mattison boated a 7-pounder, a 4-pounder and a 2-pounder that added more than 13 pounds to his daily total.

“It is like you hear everyone say, ‘never give up.’ What happened felt like a miracle,” says Mattison. “That feeling of catching them all in the last 20 minutes, I don’t even know how to put it into words.”