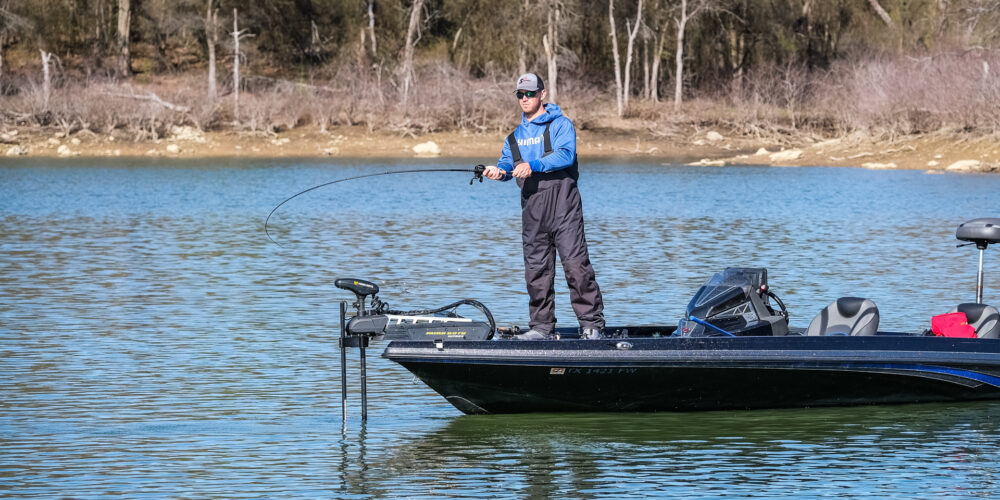 Saying it’s tough-going on Lake Texoma right now may sound like a broken record, but a quick glance at the stats will back it up. Day 2 of the Toyota Series presented by A.R.E. event, which is presented by Abu Garcia and hosted by Discover Durant, saw only 25 limits weighed. In fact, just two pros in the Top 10 managed limits both days of competition.

Because things are so tough, just 5 pounds separates 10th from first, where Evan Barnes still holds the lead. Believe it or not, the bite is actually improving as warm weather today helped draw more fish towards the bank, and with another warm day in the forecast for Saturday this tournament could simply come down to who can finish the strongest.

With that in mind, here’s a look at some of the top pros with their hat in the ring for a Toyota Series win tomorrow.

Though his weight slipped a bit, Blake Schroeder is one of two pros in the Top 10 who has weighed a limit two days in a row. Sitting just 10 ounces off the lead, Schroeder has a good shot at grabbing the first Toyota Series win of his career tomorrow.

Schroeder kept close to the ramp yesterday to catch his fish, saying he burned roughly 15 gallons of gas. Today, he ran to an area and camped there until it was time to head to weigh-in.

“I only caught five keepers today, but I caught five short fish, which I didn’t catch any shorts yesterday,” Schroeder says. “For me, I think tomorrow is going to be a grind. I know there’s some fish moving into the area. I saw some guys come in late in the day and catch some fish and I really think the fact that the field cuts down to ten tomorrow will help.”

Using a one-two punch of an A-rig and a Texas rig, Schroeder is leaning on areas he has past experience in. It’s worked well over the course of two days, but tomorrow he may switch things up and take advantage of the smaller field.

“Tomorrow I do plan on running around a little bit more,” he says.

Losing fish in a tournament is never a good thing. Failing to weigh-in a limit two days in a row is also a recipe for fish stories to your buddies on your drive home. But when you catch the quality Shawn Temple has this week, you can power your way into the Top 10.

“I’ve lost fish every day and I’m only getting seven or eight bites each day,” Temple says. “When you’re fishing for smallmouth, that’s just what happens – they come off.”

Weighing one smallmouth and three largemouth on Day 1, Temple had an even spilt of brown and green today. Mixed bags are a great recipe for success on Texoma, which is exactly why Temple is doing it.

“I’m covering a lot of water,” he says. “All of my fish every day have come from new places. I just know what I’m looking for and I’ve fished this lake a lot and know certain areas they should be on this time of year.”

Temple is obviously around good quality as he’s weighed back-to-back 14-pound bags with just four fish each day. If he can fill a limit tomorrow, he’ll be in good shape for his first MLF win.

“I’m just throwing a [vibrating jig] and hopefully they’ll continue to eat that thing,” he says. “If not, then I’ll pick up a flipping stick and try to get some that way.”

When Chad Mrazek first set eyes on Texoma a few days ago he was hoping he could turn his luck around. Catching the biggest limit of the tournament today weighing 16-15 certainly helped.

“I actually just drove here from the Harris Chain event, so it’s my first time here,” he says. “I blew my motor on the second day at Harris. I drove to Mississippi to get my motor fixed and stayed there for two nights. Thank God, Mercury hooked me up big-time and then I came straight here. It’s been a crazy couple of days I’ll tell you that.”

Mrazek weighed just three fish on Day 1, but they weighed 11-2. Today, he put them all in the boat.

“I knew I was around size and it was a matter of getting five or not,” he says. “I had a good feeling today and tried to stick with what I like doing today by fishing muddy water and it worked out.

“I adjusted a little bit today by sticking to what I knew I could catch big fish on. I think with the weather tomorrow being warm will help with the fish pulling up.”

Putting a limit in the boat on Day 2 helped slide Billy Cline into the fifth spot and keep him in contention for another piece of MLF hardware to add to his mantle.

Cline fell victim to good quality, but not the quantity on Day 1 with a three fish weighing 12-2. So, he changed things up to get five today.

“I didn’t catch a single fish today the way I caught them yesterday,” says Cline. “That’s just the way this lake is.”

Trying to catch some smallmouth yesterday, Cline decided to try for largemouth today. Thanks to “extensive” knowledge of Texoma, Cline knows where he should be able to get quality bites and has been slowly piecing the puzzle together this week.

“This afternoon I feel like I started to see a little bit of a transition,” Cline says. “My bigger bites were coming from something I haven’t done yet, but they’re starting to show up a little bit. You have to fish a long time between bites, but I think the warming trend we’re getting is helping the transition.”