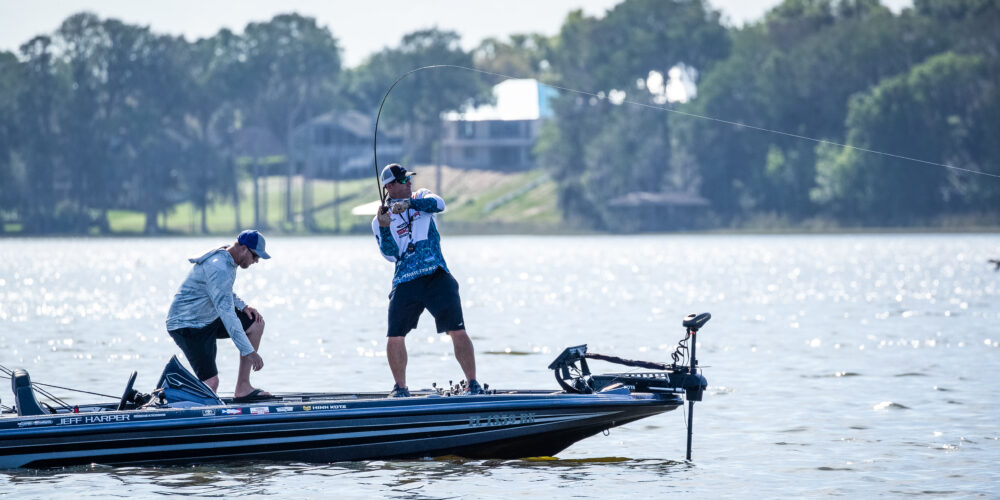 One look at the standings sheet of the Toyota Series presented by A.R.E. event on the Harris Chain and it appears as if Jordan Tompkins is fishing on another planet. Aside from Thompkins’ 31-pound, 6-ounce catch, things got back to normal on the score sheet real fast: a single 20-pound bag and some catches in the high teens round out the top five.

Most in the top five after Day 1 are either running out of Harris to get away from fishing pressure or are fishing offshore for postspawn bass. Here is a better look at what they are doing:

Christian Greico caught the biggest bass on day one, weighing in at 9 pounds, 12 ounces, which anchored his runner-up limit. That bass earns Greico an extra $150 for the Big Bass award, but he might have some more cash coming his way for the lunker as well.

“The fish had tag in it with a dollar amount on it with an ID number and a phone number,” Greico says. “I called the number and left a message but haven’t heard back from them on what the deal is with it.”

Greico’s strategy for the day was to get far away from Harris.

“There have been so many tournaments here this year, I wanted to go somewhere else,” he says. “It was a long trip, but once I got there, I caught a decent limit pretty quick. I caught the big one at about 10:30.

“I’m mostly flipping and pitching shallow cover for fish that are still in the spawning mode,” he adds. “It’s a fun way to fish when you can have it to yourself.”

Tackle Warehouse Pro Circuit pro Terry Luedke had an offshore bite going in practice, but it dried up today forcing him to shallower water closer to the bank.

“I got up there and started scanning around with my Panoptix to find isolated clumps of grass,” Luedke says. “When I’d see a clump on the on the screen, I’d put my Power-Poles down and cast to the clumps with either a swimming worm or a swim jig.”

Local pro Steve Eastman spent most of his day fishing offshore grass spots in 5 to 12 feet of water.

“I fished six different spots,” Eastman says. “I mixed it up fishing the spots fast with a ChatterBait and a [lipless] and then I would slow down and drag a worm or Senko to get an extra bite or two.”

Jeffrey Harper got an early bite going on structure out in deeper water with a lipless rattle bait.

“I’ve got about six or seven pieces of structure holding fish, but I only fished about three of them today,” he says. “I got a decent limit by about 11 o’clock and decided to save the structure fish for tomorrow. From there I fished new water looking for something else and didn’t cull up again until 3 o’clock.”