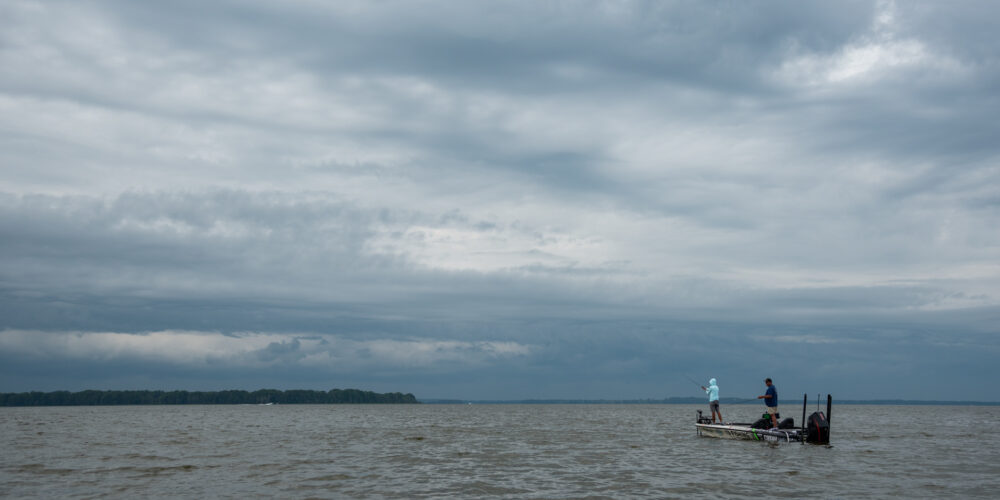 LEESBURG, Fla. – Day 2 of the Toyota Series Presented by A.R.E. Southern Division event on the Harris Chain proved to be a weird, wild ride. Day 2 started similar to Day 1, with heat and humidity on a steep rise in the morning. But, big storms from the south moved in at about 9:30 a.m., bringing rain and a fierce burst of wind that whipped the Chain of Lakes up into jostled waters for about an hour. Things calmed down after that, and remained overcast until weigh-in when storms resumed.

The weather seemed to spark an uptick in the bite as six limits of more than 20 pounds were recorded, including three over 24 pounds. In addition, the wind hampered those fishing offshore and the shallow bite shined.

Among the leaders, bream beds, shade, docks, pads, topwaters, flipping and even punching became common denominators on Day 2. Leader Andrew Ready has found success with a topwater frog and a spinnerbait.

Here is a look at how others in the top five are mining bass from the Harris Chain.

Austin Baskette of Leesburg, Florida, propelled from 22nd place at the end of Day 1 and into the top five on Day 2 with a five-bass limit weighing 24 pounds, 4 ounces, anchored by an 8-6 kicker.

“During practice I could actually see postspawn bass lurking around on bream beds, eating bream,” Baskette said. “I marked those places and during the tournament I’ve been staying back off those beds and just blind casting to them. Today, the bass seemed to have gotten bigger on a couple of places I caught them yesterday, which is a good problem to have.”

Bobby Bakewell bettered his weight from Day 1 with a 19-pound, 11-ounce bag today. To hear him tell, he is all in on the shallows.

“When it gets hot here, they like that shallow shade of pads and docks,” Bakewell said. “Fishing a frog under docks is my favorite way to fish, so if it’s working at all, that’s the way I’m going to fish.

“I’m fishing pads some too,” he said. “But to hear that echo of a big bass crushing a frog under a dock – there is no other bite like it.”

Christian Greico of Tampa, Florida, is the only pro in the top five who has forced the offshore bite to work for him. He is using crankbaits and Carolina rigs on offshore humps and shell beds to stay in the hunt.

“I had to run a lot of places to make it work today,” Greico said. “I probably hit 20 different spots. Plus, that wind got up pretty bad for a while and I had to dodge into a canal for a bit and fish shallow.”

With rain in the forecast tomorrow, Greico’s offshore bite may wane, but don’t count him out yet. He won the Tackle Warehouse Pro Circuit event here back in March by taking some big final day gambles that paid off.

Dustin Smith of Grand Island, Florida, improved upon his Day 1 weight of 16-4 with a 19-pound, 11-ounce catch today to move into the top five. Smith, like other leaders, is running shallow bream beds, shade and pads with a mixture of topwaters, including frogs and a Smithwick Devil’s Horse.

“Sun makes my shade pattern much better, and we’re not supposed to get much of it tomorrow,” he said. “Once that weather rolled in today and I lost my shade lines with the overcast, the fish were not as predictable in terms of where they were set up.”