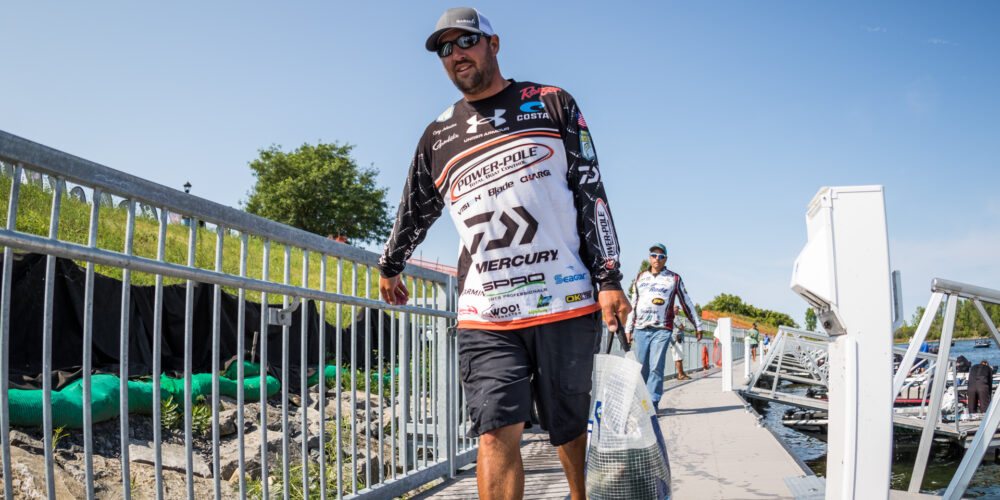 MASSENA, N.Y. – While beautiful weather and great fishing defined Day 1 of the Toyota Series Presented by A.R.E. Northern Division event on the St. Lawrence River, Day 2 was marked by lighter weights and a whole lot of wind. Though the top pros are still catching them (a 20-pound average was good for 15th), most everyone felt the effects of the wind in one way or another.

Leading big, Chris Johnston has crushed more than 50 pounds of smallmouth so far. Right behind him, his brother Cory Johnston and Justin Atkins have both sacked more than 46 pounds. Between them, all of the top three pros have fished in Lake Ontario at least some of the time.

The elder of the Johnston brothers, Cory Johnston says he gave some of the juice to his little brother on Day 2. If it’s true, scrambling around for 22-8 is still pretty good.

“I kinda stayed out of [Chris’s] way today and let him go wherever he wanted,” said Cory Johnston. “I just fished around and scrambled up what I could. We’ll see what the wind is like tomorrow, I might gamble a little and go for an enormous bag, we’ll see what the weather brings.”

Rolling with a drop-shot deep in the river and the lake, Cory Johnston says he had about 3 hours to fish.

“It’s not long at all, not when you have a million spots going through your head,” he said. “And you can’t fish very many of them, not with the wind like it was today. There’s a few fish on each spot. Sometimes they’re gone, and sometimes there are 10. I only fished three spots today.”

Fishing for only two hours due to some mechanical difficulties and the conditions, Justin Atkins still managed to put 22-3 on the board and keep himself in the running for the Toyota Series Championship on Pickwick.

“It was good when we first got there, then it was like I lost them, I don’t know if they got deeper or shallower, that wind makes them move around so bad,” Atkins said. “I didn’t even go to where I was going to go today, I was going to go to a new place I felt was protected from the wind, but the run to it was going to be bad. So, I kept running the easiest route to the lake and eased back over to a close place.”

Fighting the wind, Atkins missed a few he thinks he could have landed on a good day. All things considered, he put together a great showing on a short day. Fishing a Berkley PowerBait MaxScent Flat Worm, he piled up 12 keepers in no time.

“Yesterday was as good as it gets,” Atkins said. “I ran as hard as I could there and as hard as I could back – I fished yesterday for about 4 hours and still had about 45 minutes when I got back. So, I could have fished a little longer, but I knew I had a good bag – at that point you’re shaving ounces. If the weather allows, I can get 5 hours. In practice you’ve got long days, in practice we caught 25 every day. I think 23 is very doable, 25 is a possibility.”

A St. Lawrence local, Jonathan Robla is doing the best of anyone who has stuck to the actual river so far.

Doing his work deep with a drop-shot and a Ned rig for the most part, Robla figures he caught 30 keepers today. Sadly, he lost the big ones.

“Tomorrow, it’s going to be interesting,” he said. “I shook off a lot of big fish – accidentally. I should have had over a 25-pound bag. I don’t know if it was the wind, but I just couldn’t keep the boat and everything in line where I needed to be.”

The second Alabama angler in the top five (because of course there is), Brent Crow sacked 23-7 on Day 2 to rocket up the leaderboard.

“I made the long run, and I’ve caught every one on a Flat Worm, like everybody else,” said Crow, who is fishing in the Clayton area. “Today I had a long day, I didn’t have to weigh-in until 4, I felt hurried yesterday and didn’t stay on any place very long. I think I just didn’t piddle around enough to figure out where the big ones were. Today, it just felt more comfortable not being pressed for time. This place is incredible, I think there’s a 4- or 5-pounder on every shoal, you just have to find it.”

Leaving everything but spinning rods, drop-shots and Ned rigs home in Alabama, he’s somewhat in his element.

“I do a lot of live bait fishing at Pickwick in the fall in the current,” he said. “That has helped me so much here. It’s the same principle, except it’s deeper. And you don’t have live bait, but you don’t need it here.”