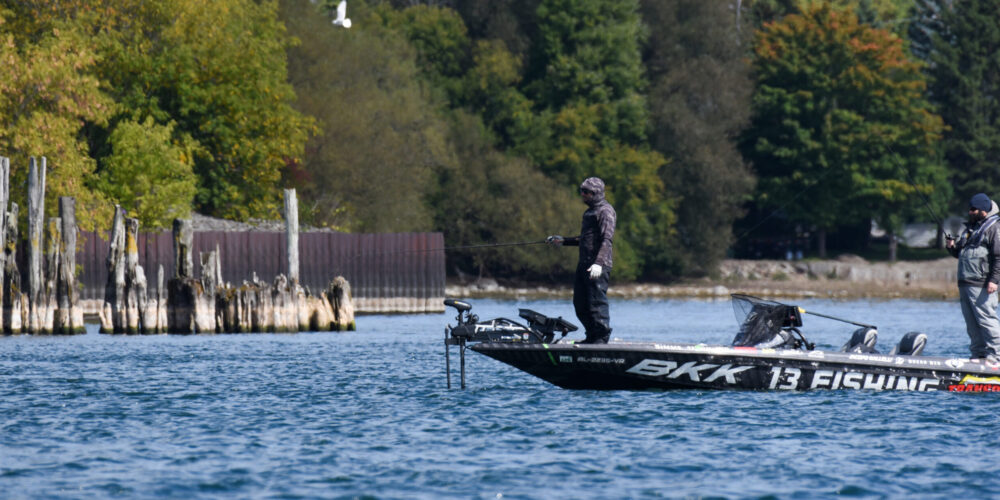 MASSENA, N.Y. – Even a tough day on a great fishery can still be impressive, and today certainly was tough on the St. Lawrence River.

Strong winds frustrated anglers and made the bite stingy at the Toyota Series Northern Division finale presented by BoatLogix. Local guide Brent Anderson’s knowledge of the current and how to play the winds certainly helped him move into the lead. Behind him, though, were a number of pros who hunkered down into places to grind out enough bites to stay in the hunt for tomorrow.

Today was not a good day to not have a trolling motor. Spike Stoker found that out in the worst way.

After experiencing some issues at the end of Day 1, he thought he got it figured out, only to have the issues resurface today, basically scrapping the first 2 ½ hours of his day.

“Today was not a good day to drift,” Stoker said. “The wind was blowing hard enough that the current didn’t move you because the wind held you stationary against it. So, I didn’t catch hardly anything the first five hours. I was just in my head. Finally, I stopped, sat down, thought about it for a second and then went to catching them.”

Even once he did catch them, it took him until his final drift to get five quality bites in large part because of the wind.

“The wind was just weird,” Stoker said. “They don’t like your lure coming at an angle or against the current. You have to have it the same speed with the current. That was hard to do today.”

“How far are you running?” is a key question on this river, with 50 miles being a typical run, and runs in excess of 90 miles not out of the question. But runs of 8 miles like Todd Walters’? That’s certainly not the norm, but it’s working out thanks to some stubbornness.

“I basically just stayed on one ½-mile stretch all morning until I got my fish,” Walters said. “I probably drifted it 20 times.”

He says it’s nothing special, just a spot where the fish can move up in 30-45 feet of water, but he knows they’re there and if he grinds long enough, he’ll catch the quality he needs, especially with the extra fishing time he’s saving by not making such a long run.

It seems motor issues were quite the common theme, as Jacopo Gallelli was also hit with the curse today.

While his morning was fine and he was able to catch four quality fish, his trolling motor conked out in the early afternoon. At that point, he figured he was dead in the water.

“Today was really tough to make your drift work because of the wind,” Gallelli said. “Somehow I managed to catch one more good fish after I lost my trolling motor.”

A big reason, he felt, was belief in his spot and what he’s doing. His spot is something with more current than most, and as for lures, he says he only has a handful of rods and 40 bags of just a couple different types of soft plastics.

“It’s a matter of belief,” Gallelli said. “You know what you’re doing. Keep it simple, and it will work out.”

Tommy Dickerson had himself a blast at the Tackle Warehouse TITLE. So much so, he didn’t leave to go back home to Texas. Instead, he stayed up here the last six weeks to learn how to fish the Clayton, New York, area … only to not fish there this week.

“I found one little old drift in Ogdensburg (New York),” Dickerson said. “It’s only 400 yards and it’s kind of shallow, in 12-15 feet, but I guess the fish are pulling up on the bars.

There’s no doubt about the St. Lawrence being a good time, considering how he’s catching them. Again, while he spent the last few weeks tossing drop-shots, yesterday morning he went an hour without a bite on that. So, he picked up one of his favorite Texas staples – a Carolina rig.

“I decided to play with that Carolina rig, and they’ve just been eating it like crazy ever since.”