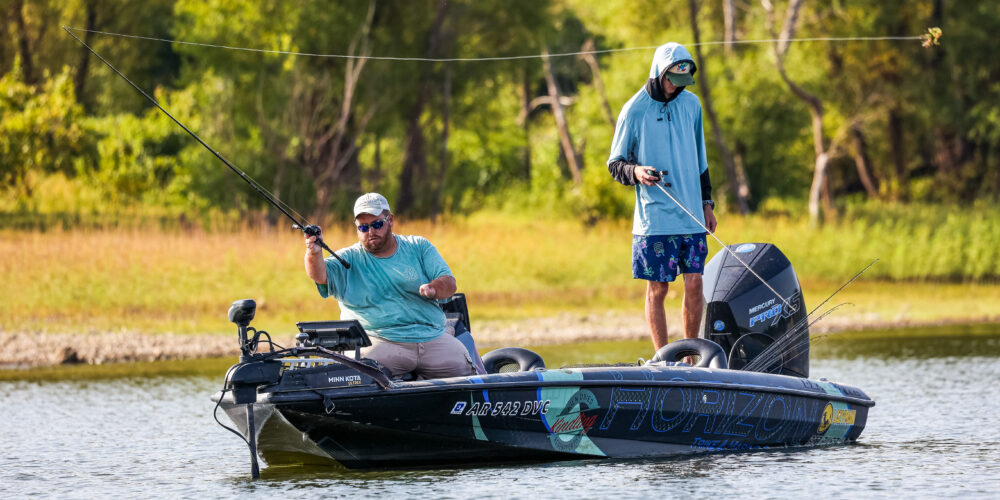 WARSAW, Mo. – A difficult late-summer to early-fall transition bite persisted into Day 2 of the Toyota Series Presented by A.R.E. event on Truman Lake, but so did the anglers in the top five. Local hammer Brock Reinkemeyer was able to grind out a respectable 30-pound, 11-ounce total for the lead by pitching jigs and worms to visible cover. Here’s how the other top anglers stacked up behind him.

The most consistent angler across Days 1 and 2, local pro Brad Jelinek was able to snag an early limit and work on upgrades the rest of the day.

“I switched up the rotation a little bit, and I’m glad I did,” Jelinek said. “I pulled up to my first spot and caught four in about 10 minutes. Then it slowed down and I picked it apart for a little while.”

After getting five in the box – and a little breathing room – Jelinek was able to make some significant culls to keep himself in the running.

“I went to a keeper hole and caught two keepers, then made a decent run and went to a spot I saved for today,” Jelinek said. “The Good Lord was looking after me and I pulled up there and caught my two biggest right off of it. I was fired up. I culled two more times late in the day and got to the 15-pound mark. I said right from the beginning I think 15 pounds will win, so I at least have a chance.”

With a close-knit field and an even tighter leaderboard, Jelinek opted to keep his tactics tight to the chest – but he doesn’t plan to make any changes on Championship Saturday.

“I’m going to stick to the game plan tomorrow,” he said. “It’s the only way I know how to catch big fish around here, so I’m going to keep doing it.”

With a championship on the line, Jelinek is prepared to leave it all out on the water tomorrow.

“I did everything in my power in practice to prepare myself to win one of these,” he said. “If I don’t win one, at least I know I did everything I could. If it’s the will of the man upstairs, then it’ll happen.”

Falling from first to third, Minnesota pro Kyle Schutta was able to scrape together a sizeable limit to remain in the hunt.

“Things were really slow to start,” Schutta said. “I went to my starting spot and there was already someone there. We ran to a different spot to throw some topwater, and caught a couple small ones. Then I went to shallow water and just grinded the whole day away. It was a brutal, brutal bite.”

The dull pain of a tough bite turned sharp on Schutta in a hurry, as he scrambled to try to fill his limit.

“I had four in the box and fished for two hours trying to catch my fifth fish. I had it hooked twice and lost them,” Schutta said. “Finally, I thought I had hooked into a good one, only to realize it was a walleye at the boat. The rod was bowed-up and the plug came out and buried in my shoulder.”

His co-angler was able to remove the plug, but couldn’t safely get the hook out. With a barb jabbed through his shirt and still stuck in his shoulder, Schutta pitched to the next tree and buried a different hook in his fifth keeper.

“It was a great feeling to get that last one in the boat,” he said. “I’m in position to do something tomorrow and feel good about that, but we absolutely burned ‘em to the floor today. I’ll be lucky if I catch a carp tomorrow, but I’m happy to be in contention in case something goes off.”

Arkansas resident Hunter Baughman was the comeback kid on Day 2, shocking the scales with a 17-6 limit that skyrocketed him into fourth place.

“I don’t know what changed from Day 1 to Day 2 really,” Baughman said. “But they bit a little better for me. It seemed like every time I got a bite it was a good one”

Staying within a few miles of the ramp and targeting brushpiles he found while idling, Baughman is using LiveScope to ensure his ¼-ounce Brazalo jig lands in the target zone.

“I’m fishing a lot of spots, but moving the bait slowly when I get there,” he said. “If I’m going to catch one it’s usually within the first three throws, it’s almost immediate.”

Facing a daunting lake on little practice, Baughman has opted to stay within a core area – a strategy that’s paid off big on the first two days.

“I’ve never been here before, and was able to practice for three days. I had about 100 waypoints, and I’ve run through about all of them now,” he said. “There’s so much timber on this lake, that’s why I’m staying close to the ramp. I didn’t want to try to navigate with everything up the river.”

After lunging to the top of the leaderboard, Baughman is looking forward to getting back out on the water on Day 3.

“I think I can go out and catch five tomorrow, but I’m coming from behind so if I can catch ‘em like that again – great,” he said. “I was scared I wouldn’t even have five today, I’m excited to get to fish tomorrow.”

Rounding out the top five is Missouri pro Austin Culbertson. Landing 15-3 on Day 1, Culbertson was able to bring an additional 12-1 to the scales on Day 2. While his day started out strong, finishing his limit proved to be a challenge.

“I had four fish in the box before 9 a.m.,” Culbertson said. “I hooked into a 5- or 6-pounder around 10. It came up, jumped, and threw the jerkbait right back at me. It seemed to plague me the rest of the day, I didn’t have another keeper bite until 2 p.m..”

Using his electronics to target the right fish across stump flats, Culbertson relied on a jerkbait and big worm most of the day.

“I’m fishing the stumps for a long time,” he said. “I had three major flats I’m fishing and just rotating through them. It’s a grind, but it seems to be working.”

Currently second in Angler of the Year points, Culbertson was spotted tossing some baits to fellow competitor Michael Harlin – who happens to be first in AOY.

“I shared some baits with Michael today,” Culbertson said. “We are best friends and fish everything together. I was happy to help him out.”