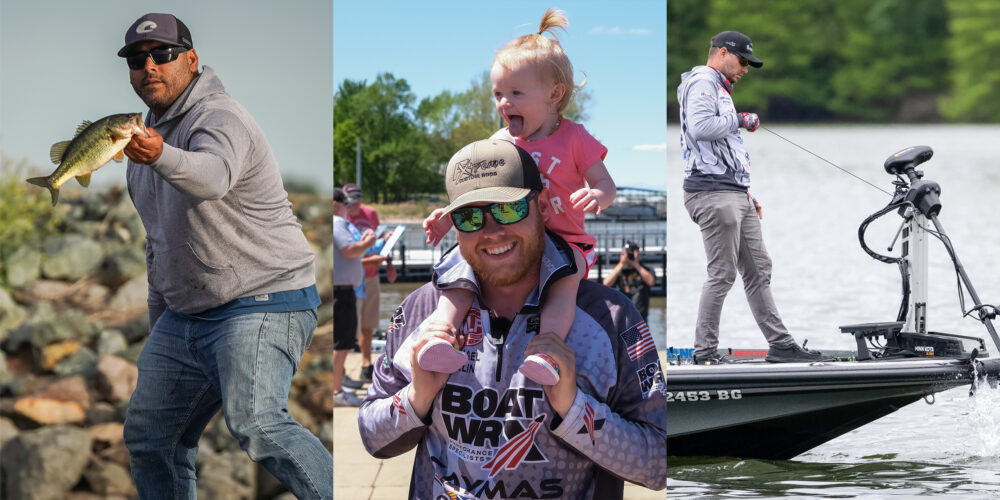 Check out who was tops in each division below.

Averaging a hair under 10th place in a division that boasted more than 250 boats in each event, Derik Hudson earned the Angler of the Year title by 30 points and is headed to the Tackle Warehouse Invitationals in 2022. According to him, his breakout year was a long time coming.

In 2013, Hudson attempted a full EverStart Series schedule, finished third in the first event at Smith Mountain Lake, and had the rest of his season hammered by boat troubles.

“I took a break, my boat was out of warranty, so that came out of my pocket,” Hudson said. “So, I took some time off, started my family, got a house, and we focused on all that. The family side of things. That Skeeter with a Yamaha was just sitting there.”

In 2019, Hudson got back into it, winning AOY in the Phoenix Bass Fishing League Piedmont Division out of an aluminum Ranger.

“Since then, I’ve bumped up to a fiberglass boat and started going to the Toyota Series,” Hudson said. “I was doing pretty good, decent, and I was still working at the fire department. November of last year, I left the fire department, and quit my job to pursue this full-time. The first one was at Guntersville, the biggest tournament MLF has ever had, and I finished third.”

Then at Dale Hollow, Hudson finished 11th strictly catching bass with forward-facing sonar, which was a new one for him. At Chickamauga, he hit boat issues again on Day 1 but salvaged a limit and got a clutch ride back to weigh-in from Bryan Partak. Then, in a boat he borrowed from Tyler Goss, Hudson rallied with 20-12 on Day 2 to make the cut and ice down the AOY title.

Hudson plans to continue his fishing career at the highest level he can, but earning AOY was special for him.

“It was amazing, Alan Gray was running that one, and he’s got the gift of gab,” Hudson said. “Him being there was pretty special, for one because he gives phenomenal prayers in the morning. When I walked up on stage, he knew I had won AOY, and he gave a really great speech about how this was the biggest the Toyota Series had ever been, and the hardest division they’d ever had. That was when it really hit home, and I had my family with me, and it was really special.”

Though he hails from Arkansas, it’s no surprise to anyone that Spencer Shuffield took down a Northern Division AOY title. A pair of Top-10 finishes to start the season let him build a big lead, and making the Day 3 cut at the final event cemented his title.

Fishing seventh at the Potomac came at a perfect time for Shuffield, as he’d just coughed up the Tackle Warehouse Pro Circuit Angler of the Year lead at the James River the prior week.

“The Potomac, I love that place,” he said. “After figuring out the ChatterBait in the grass the year before, it was a good way get over the James. It was a shot to the gut not doing good at the James, and it felt good to go back to the Potomac to kick everything back off.”

From there, Shuffield’s lowest finish the rest of the summer was 11th, as he cleaned up on Champlain and then won the TITLE. In an autumnal return to the St. Lawrence, he struggled his way to another Top 20.

“It was tough at the St. Lawrence, it was 10 times tougher than I thought it would be,” he said. “I saw so many, way more than I saw at the TITLE, and they would not bite. They would scream right toward your stuff and not touch it. It was like they were on some sort of different forage. It almost took me back to our fall fishing here. When our bass are chasing little bitty shad in the fall, if you’re not throwing what they’re eating then you can’t get them to bite.”

Still, Shuffield threw at enough smallies to close out the title, and he’s the first Northern Division Angler of the Year from south of Pennsylvania since Jacob Powroznik won in 2012.

In 2021, Andy Newcomb turned in an all-timer of a season to win the Plains Division AOY, with finishes of second, first and eighth. This year, Michael Harlin won AOY with three Top-10 finishes, placing seventh, fourth and fifth.

“I didn’t quite top Andy’s year from last year,” Harlin said of his AOY run. “It’s kind of surreal to be honest with you, it’s definitely not an easy thing to do, and you’ve got to soak it in while you can. But, the fishing community has a short-term memory so, you’ve got to get back to catching them.”

Harlin knocked it out of the park in every event this year, but the finale at Truman was what worried him the most.

“I was scared for five months about that tournament,” he said. “September on Truman Lake is a recipe for disaster. March on Lake of the Ozarks, there’s a set answer for what to do. That one was definitely the question mark. It turned out that Lake of the Ozarks was my worst finish, but Truman I had the least experience on.”

Recently turned 28 years old, Harlin sells real estate in the Lake of the Ozarks area. He’s part of a crew of younger anglers that have made a lot of highlights in recent years, as he, Austin Culbertson, Brad Jelinek and Brock Reinkemeyer all have at least a Top 10 or two to their credit as of late.

“I think a lot of that is just pushing each other and wanting to beat the next guy,” Harlin said. “But really, it’s not so much about beating them, it’s about being in an environment where everyone is staying competitive and pushing each other to get to the next level. But, we keep the mood light, and we have a lot of fun. There’s a lot of times where we’re out playing golf ahead of a tournament, or even after a local one.”

This year, Jelinek, Harlin and Culbertson all did well enough in the points to set their sights on the Tackle Warehouse Invitationals, where they could be headliners of the rookie class.

“We’re definitely going to try to take it to the next level,” Harlin said. “As of right now, the plan is the Invitationals and see where it takes us.”

Tackle Warehouse Pro Circuit rookie Christian Greico took home a trophy at the Harris Chain this year, but he also won AOY in the Southern Division.

“It was a good feeling for sure, knowing I finished in first against the pretty stiff competition we’ve got here in Florida and the South,” Greico said of the title. “And it was a little bit of a morale-booster too, because I was in the middle of the Pro Circuit season.”

Surviving a one-day event at Santee Cooper with 15 pounds for 42nd place was key, as Greico sailed in the other events.

“Santee was the one, just because the bite was so tough,” he said. “If you could catch five fish you’d have a pretty good bag, but you never knew going out.”

Overall, Greico thinks 2022 was a good year for him, and that the Toyota Series provided a boost at the right time.

Earning his second Series-level Angler of the Year win, Kris Wilson knocked out a pair of Top-10 finishes and then wrapped up the season with a 27th-place showing in the second Sam Rayburn event. A pipeline controller, Wilson does shift work, which generally makes full seasons logistically difficult. Still, he’s won two AOY titles and two events in his career, so far.

“It feels good, I’ve only fished the whole series three different years, and I’ve won AOY two out of three,” Wilson said. “I feel pretty fortunate to have done that. I was a little disappointed with the last tournament at Rayburn, but you can’t complain.”

As someone working a regular job with limited time to fish, jumping into select Toyota Series events and team events locally has generally been the move for the Texas stick.

“Trying to juggle work, it just makes more sense for me to fish locally, rather than traveling and all that,” Wilson said. “I’ve got a place to stay at Rayburn, so it’s pretty cheap for me to go there. I’d like to travel more, but I’ve got a 13-year-old boy who’s big into baseball, and with work, it’s hard to figure out the time.”

This year, the second stop of the Southwestern Division was at Lake Texoma, and due to wind it turned into a risky one-day shootout. Wilson came through with flying colors.

“I fish over there once or twice a year, I’ve been there quite a few times,” Wilson said. “That was definitely a tough event that could have gone either way. I sight-fished, and I had one little pocket that seemed kind of special, and I happened to find a few fish that nobody else found. I feel fortunate to have what I found there, if it wasn’t for that one little area I would have probably struggled.”

Earning his second AOY title in four years, David Valdivia knocked out a pair of Top-10 finishes in the Western Division and finished 17th in the season finale at the California Delta. An electrician for the city of Riverside, California, Valdivia is also leading in AOY in WON Bass, and his second Toyota Series title is proof that he’s firing on all cylinders now.

“I knew that I wanted to fish more,” he said. “There’s other jobs I could be working at and making more money, but I wouldn’t have the benefits of being able to leave for a week or two and getting paid for it. That was part of the decision of moving where I live now, not thinking about fishing back east, but thinking about MLF tournaments and WON Bass.

“Having the time, and now that I’m so close to work, I’m way more prepared than I was. The move was big for me,” he said. “It’s so cool having a lake 30 minutes away, and now I have my boat in my own garage. I used to pay $450 to store my boat, and I had to drive 30 minutes from the house to go get it.”

When he first won AOY in 2019, Valdivia entered the season finale tied with Lane Olson. This time, he came into the event in fourth place, behind Kyle Grover, Patrick Touey and red-hot Justin Kerr.

“It was unexpected, I just went into the tournament trying to do good, I didn’t think it would work out that way,” Valdivia said. “I was super surprised, it was way more shocking than the last time – the last time, it was so close that I kind of knew.”

As a Western angler, the 35-year-old Valdivia is looking forward to the Toyota Series Championship, but going east for a shot at fishing in the big leagues full-time isn’t part of the plan. At least, not quite yet.

“I think, with the way that work is going finally, it could be a possibility in a couple years,” Valdivia said of the prospect of coming east. “Just to say that I did it. If everything stays the same, and nothing crazy happens, I feel like it’s going to be doable. I would love to do it, with us living out here, everything is so far. You’ve got to leave your rig out there pretty much, and fly back, but I feel like in a couple years I could do it.”