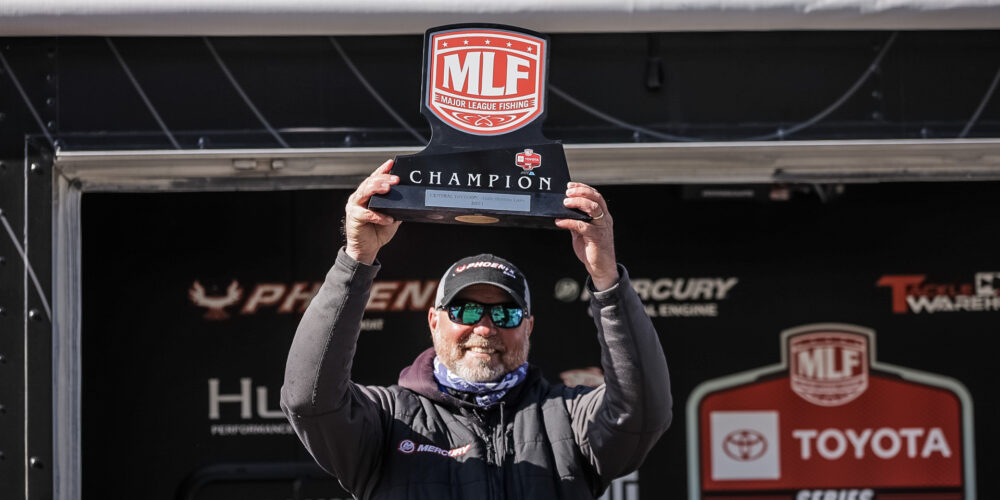 At this point, Adam Wagner is just trying to find out how many different ways he can win on Dale Hollow.

Last year, Wagner found a mega-school in deep water to complete a huge come-from-behind victory to close out the 2020 Toyota Series presented by A.R.E. Central Division schedule. This time around, he forwent the late-tournament heroics in favor of a massive Day 1 bag to complete the wire-to-wire victory on a lake he knows so well.

In the second event of the 2021 Central Division presented by Neat Companies season, Wagner hauled in his biggest-ever bag on his home fishery (23-15) to jump out to an early 3-plus-pound lead. From there, it was simply a matter of fighting tooth and nail amidst quickly changing conditions to fill out a couple limits and edge out a pretty stacked field of anglers.

Between the two wins – just five months apart, no less – it’s a tough call which was more impressive, and Wagner is similarly torn as to which he liked better.

“It was pretty awesome being able to lead wire-to-wire,” he says of his most recent of now 16 career wins in MLF competition. “That win last year was really awesome, too. That was one of my favorites because of the way I found them and the comeback, but this one is pretty special, too.”

When you have a pair of Toyota Series wins on the same fishery within a span of less than half a year to choose from, there really isn’t a wrong answer, as it turns out.

With the win, Wagner tacks on yet another Top-10 finish to his resume to bring the total to 70 in the last 20 years. Not a bad track record for an angler many consider the best in the entire region and potentially one of the best out there – full stop.

Wagner is far too humble to burden himself with such things, opting to instead discuss the fortunate circumstances that led to his magical week on the Cumberland River impoundment. Last October, it was a fateful “motherlode” of big largemouth that he saw on his electronics as he idled around on the second day of competition. This week, it was an area he saved for the final day, despite mounting pressure on Day 2.

“I was rattled coming into today because yesterday I had five bites all day,” he admits. “I had one area that I had saved that I thought I could go in and catch five. I saved it for today and they bit really good. I caught all my fish in that one area.

“[On Day 2] I pulled into that area I was saving, and I almost fished it, and I’m really glad I didn’t.”

No one could have blamed Wagner if he did probe that area on Day 2. He weighed in 10 pounds, 13 ounces less on Thursday than he did on Wednesday, and he was certain his lead would evaporate by the end of Day 2 weigh-in. As luck would have it, fishing wasn’t just tough for him after a cold front moved in and tempted Dale Hollow’s impressive bass population to ease off the bank instead of continuing their spawning push. Nearly everyone struggled.

So, on Championship Friday, knowing he’d need to at least catch a limit to contend for the victory, Wagner picked up his flipping stick, as he had done all week, and went up shallow. Every fish he caught this week came on a Big Bite Baits Craw Tube in watermelon red flipped dirt-shallow near run-ins on Wednesday as the rain poured into Dale Hollow, or off the bank a little more on Day 2 as the cold front pushed fish further from their future beds.

On Friday, with a second day of cold, sunny conditions those same fish moved back up ultra-shallow, and Wagner was ready for them in the area he’d been saving for just such an occasion. The result: 16-10 on a day when Bass Pro Tour pro Bryan Thrift was the only other pro to weigh in a limit.

Despite finishing 72nd at Guntersville in February, Wagner qualifies for the 2021 Toyota Series Championship on Pickwick Lake simply by fishing the final event of the Central Division season on Lake Chickamauga next month by virtue of MLF’s win-and-you’re-in format for the Toyota Series. Last season, Wagner missed the first event of the year and therefore didn’t qualify to fish the 2020 championship event.

That means Wagner has a couple more things to think about once the thrill of victory starts to wear off a bit.

Of course, “struggle” is relative, but Wagner’s career resume on the Tennessee River does pale in comparison to what he’s done on Cumberland River reservoirs. Now might be a good time for the 50-year-old regional legend to branch out a bit and discover some confidence on another river system – because confidence is what made all the difference this week.

“I don’t know what to say about it,” he says. “I just have confidence in everything I do. It’s just a confidence thing. I’ve done this for so long.”

And judging from the last five-plus months, he’s not even close to being finished.