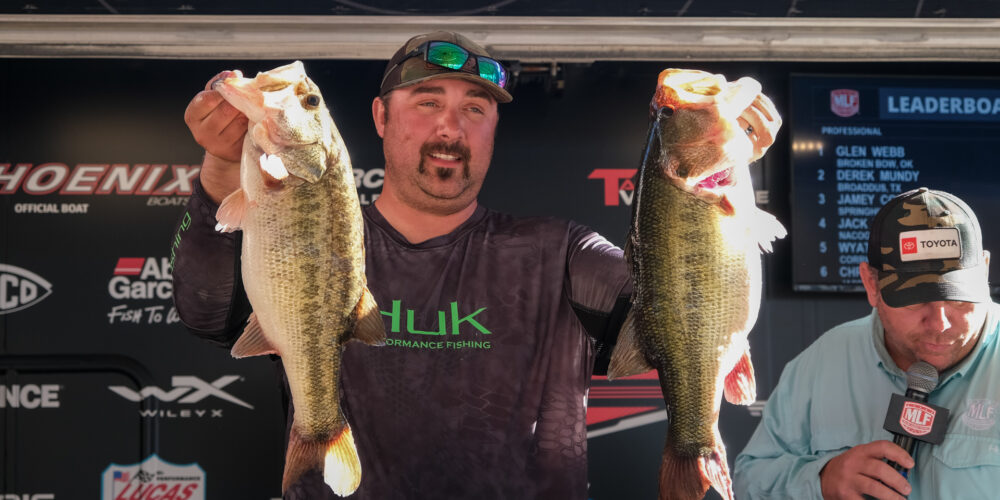 The boys brought the thunder on Day 2 of the Toyota Series Presented by A.R.E. Southwestern Division Presented by Outlaw Ordnance on Sam Rayburn. Leading the way, Glen Webb backed up his 26-pound bag from Day 1 with 28-5 to get up to 55-4 and open up a gap on the competition. Behind him, Derek Mundy sits in second after tallying 19-12 to hit 46-3. In third, the fireworks resume, with Bass Pro Tour pro Dakota Ebare rocketing up the leaderboard with 29-8 for a 44-11 total.

Webb will lead the Top 25 out on Saturday with a lead of more than 9 pounds, but it looks like the fishing on Rayburn may be wide open. That means he’ll need to keep the hammer down, even with as big a lead as he’s got, Rayburn has big enough bass to overcome it.

“I feel pretty good, I didn’t hold back today, I caught every single one that I had bite,” Webb said, mentioning that there was no deviation in his game plan for Day 2. “I went back to the same things I did yesterday, caught them on the same spot. I had an 8-10 today I caught in the exact spot that I caught my big one yesterday.”

Throwing an umbrella rig and a Carolina rig, Webb continued to see fish replenish in his area throughout the day. Still, Day 3 will bring a shift in the weather. Winds from 10 to 15 mph and a chance of rain are forecasted for the final day. Throwing a twist in what has otherwise been stable weather this week.

If his goldmine stretch of bank is affected by the wind, Webb appears to be unworried. He has spots on reserve to hit after fishing a large team tournament just the weekend prior to this event.

“If the wind is too much in the morning, I’m going to run to the spots I fished last week. It’s not that far (of a run), but I’ll just have to go slow,” said Webb.

Webb feels that it will take a lot less weight for him to seal the deal on the final day, given his Texas-sized lead. He’s hoping that between his main spot and the spots he’s saved from this past weekend, he can hold off Mundy, Ebare and the rest of a hard-charging Top 25.

On back-to-back days a 17-year-old has topped the field of Strike King Co-Anglers at Sam Rayburn. This time Levi Thibodaux of Thibodaux, Louisiana added 11 pounds and 7 ounces to his day one total of 13-4 to move up from fifth place going into the final day. His two-day total of 24-11 has him just a bit more than a pound ahead of last year’s Toyota Series Championship co-angler winner Scott Parsons.

Thibodaux had to utilize a variety of techniques the last two days to adjust behind each of his pros. On Day 1 he employed a crankbait behind his boater to sack up his top-five bag. On Day 2, the young angler caught them on a Neko rig up shallow behind his pro.

Thibodaux appears confident that no matter what situation he’s put in he will make the right adjustments behind his boater.

“It just depends on if my boater is fishing deep or shallow,” said Thibodaux about whether he will employ the Neko rig or crankbait on the final day. “If they’re, say, 15 feet or less, I’m throwing the Neko rig.”

Regardless of his choice of lure on the final day, the young Louisiana angler is excited be leading the very first Toyota Series event he’s entered. He’s one more good day of fishing on  Rayburn away from going one for one with Strike King Co-Angler titles.