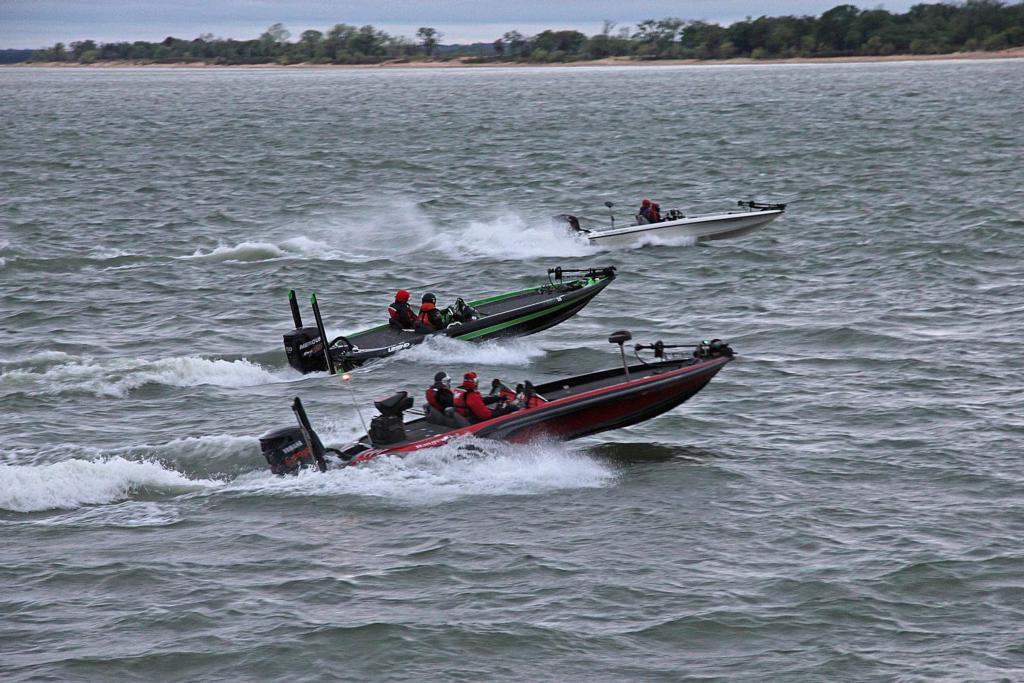 “The water levels are low right now,” said Walmart FLW Tour pro Tom Redington of Royse City, Texas. “Texas is in a drought and a lot of the cover that is normally in play is out of the water. Anglers are going to have to choose whether to target smallmouth in the clear water near the lower end of the lake or run way up the arms into the stained water to target largemouth.

“The smallmouth seem to bite a lot better on the windy and nasty days,” Redington said. “On the southern end of Texoma there are a lot of rocky banks and huge boulders, and you can kind of visually tell where the smallmouth live.

“The Alabama rig is always a big factor with the smallmouths. You can get so many good fish on it if they’re biting it. Jerkbaits and finesse jigs are both good this time of year as well. Teams can also slow down with shaky head- or dropshot-rigs. The thing about the smallies, though, is that they’re here today, gone tomorrow. You could locate them in practice, but they’ll have disappeared by the time the tournament rolls around.

“The largemouth should be a little bit steadier, as it’s classic winter prespawn tactics,” Redington continued. “There are quite a few boat docks, so flipping docks could be a strong pattern. Or, you can target the little cover that remains with squarebill crankbaits, flipping jigs, pitching Texas rigs, spinnerbaits and ChatterBaits – classic power fishing.”

Redington said that Lake Texoma will be a fun lake for college anglers because any team could win if they find the right fish, and estimated that the winning team would likely bring a stringer between 16 to 20 pounds to the scale.

“Teams aren’t going to be offshore graphing honey holes to win this tournament,” said Redington. “It’s going to be mostly shallow-water power fishing. If it looks good – a dock, a laydown, a riprap bank – hit it. If there’s nothing there, hit it an hour later, because something might have moved in.”

Anglers will take off from Highport Marina located at 120 Texoma Harbor Drive in Pottsboro, Texas, at 7 a.m. Saturday. Weigh-in will be held at the marina beginning at 3 p.m. Takeoff and weigh-in are free and open to the public.

Schools currently registered to compete in the Lake Texoma tournament, which is hosted by the Denison Area Chamber of Commerce, include: